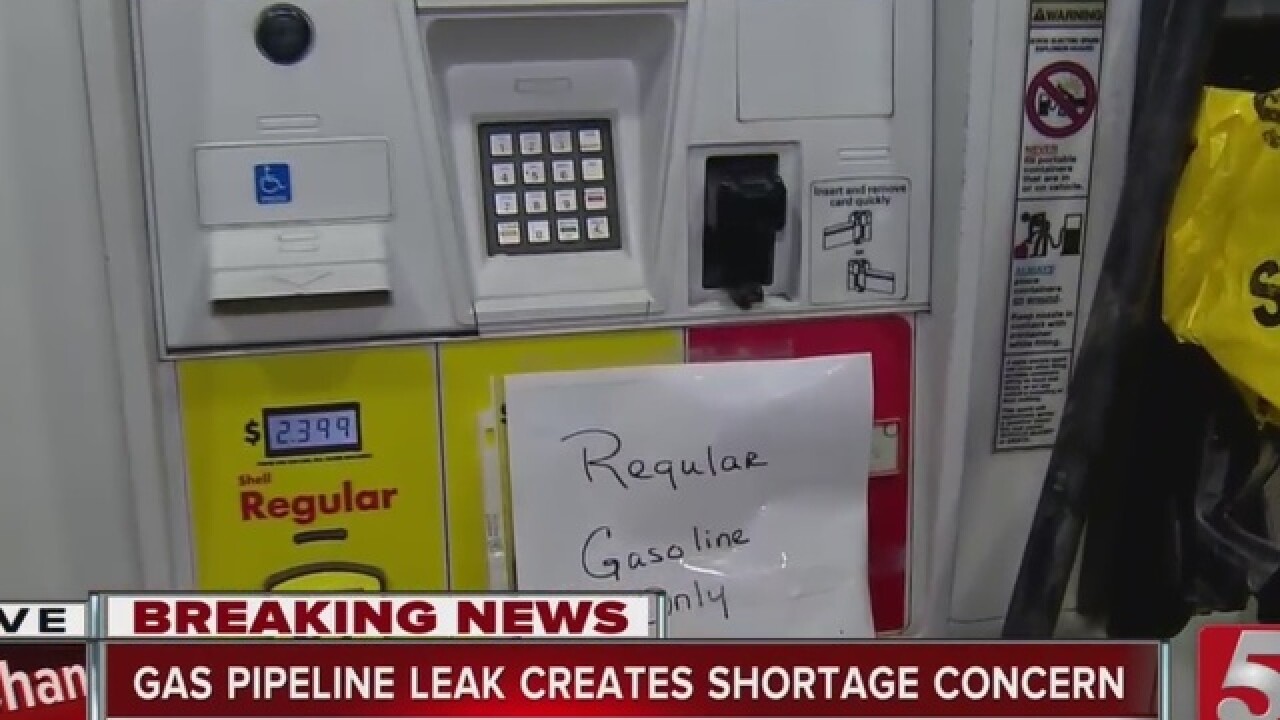 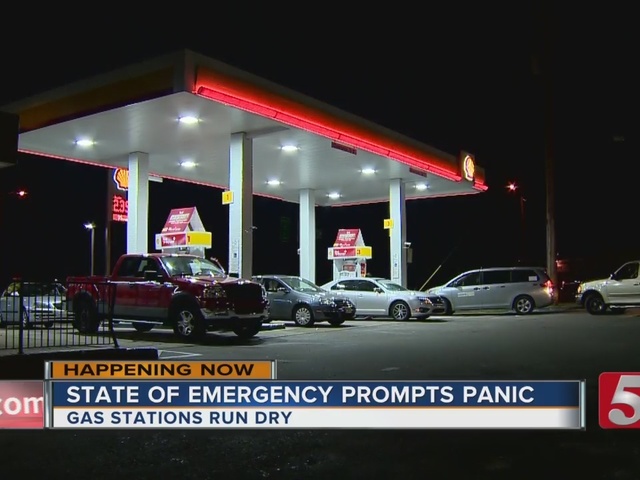 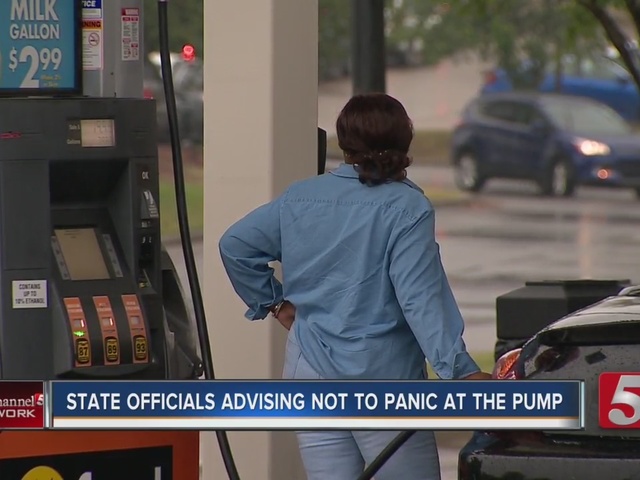 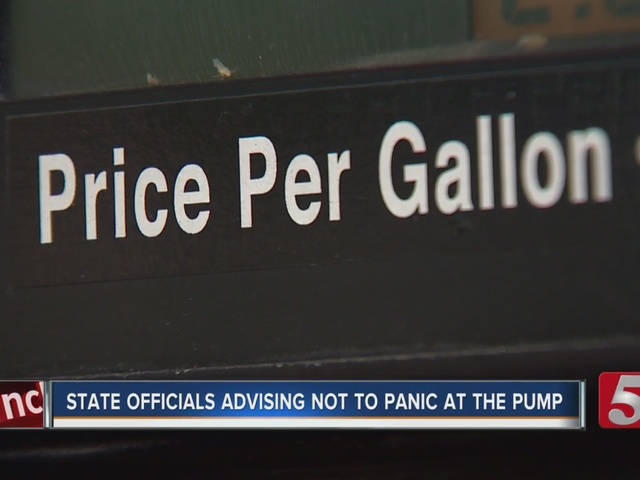 News of a spill from an Alabama fuel line has prompted drivers across Middle Tennessee to rush to the gas station, and officials said that has led to consumer panic causing a fuel supply disruption.

Adding to the demand was a statement issued by Tennessee Governor Bill Haslam, waiving the hours of service requirements for gas truck drivers in an effort to avoid a disruption of fuel coming into the state.

The state of emergency declaration seemed to have the opposite effect on gas availability at the pump.

On Sunday, those with Colonial Pipeline said work continued on the pipeline to construct a bypass. They added they were taking the safety of the public, responders, and environment into consideration.

Drivers had been reporting panic, long lines, and gas pumps running dry across the area on Friday and Saturday. Authorities have urged drivers, however, to fill up as they normally would, instead of panicking at the pump.

“We want to reassure Tennesseans there is petroleum available to meet the needs of consumers.  Gov. Haslam’s emergency declaration issued on Friday ensures the transportation and delivery of petroleum to convenience stores and retailers in Tennessee.

Tennessee’s consumers need to maintain their normal driving and fuel buying habits. If consumers fill up unnecessarily, top off their tanks when they aren’t close to empty, and fill multiple containers at the pumps, then our petroleum retailers will not be able to keep up with the demand of the fuel supply.  Even on a normal day, Tennessee’s petroleum industry as a whole would have a difficult time keeping up with the current demands being placed on Tennessee’s fuel supply.

The Colonial Pipeline is not the only supplier of petroleum to Tennessee. There are other pipelines contributing to the state’s fuel supply. Gov. Haslam’s executive order further aids in keeping fuel supplied to Tennessee as transporters have extra time to deliver to pumps.  If consumers maintain their normal driving and fuel buying habits, there will be enough capacity in Tennessee’s petroleum supply system to meet our needs.”

"We are confident that any disruptions to the supply of gasoline to our region will be resolved soon. Auxiliary methods of delivering gasoline have been opened to supply our gas stations, and Colonial is working quickly to fix the problems in Alabama. Metro has plenty of fuel on hand to ensure there is no disruption to first responders or government services.

In the meantime, I would urge my fellow Nashvillians not to make matters worse by buying gas when you don't need it. Increasing demand when supplies are low will only exacerbate the problem."

The issue started when news of the pipeline spill made it’s way into Tennessee.

The spill was first discovered on Friday, September 9, when a mining inspector smelled a gasoline odor in Shelby County, Alabama and alerted Colonial Pipeline. Two pipelines operating in the area where shut down.

The leak was discovered on Line 1, and the company responded with federal, state and local agencies. The spill released around 250,000 gallons of gasoline.

Company officials said Line 2 was put back into operation, with plans to repair Line 1. They said parts of Georgia, Alabama, Tennessee, North Carolina and South Carolina would be the first to markets to face possible disruptions.

Line 1 was expected to be repaired by next week.

Gas prices and the local supply seemed to have little impact in Nashville until news of the spill found it’s way to the area a week later after the spill was first discovered.

In his waiver declaration, Haslam said he did not think the fuel spill would cause much of a disruption in Tennessee.

“This is a precautionary measure as we are not currently seeing any widespread unavailability of petroleum in Tennessee,” Haslam said when issuing the statement.

“We urge Tennesseans to maintain their normal fuel purchasing and driving patterns to help prevent any potential impacts on our fuel supply while the pipeline undergoes repairs.”

The governor’s statement and waiver of drivers’ hours did not seem help supply gas once drivers started heading to the pumps Friday afternoon.

There were reports of long lines, increased prices and bagged pumps after hundreds of drivers topped off their tanks. By Saturday morning, several gas stations in the area reported a lack of regular unleaded fuel.

They confirmed, however, that "higher than usual fuel purchases are complicating efforts to resupply retail gas pumps."

"Wholesalers are bringing product into Middle Tennessee from the pipeline in east Tennessee and the refinery in Memphis.  Further contingency plans are being made to haul fuel from refineries in Texas and Louisiana if heavy purchasing volumes continue.

'While supply is tight across the Southeast, fuel is available,' said Emily LeRoy, executive director of the Tennessee Fuel and Convenience Store Association. 'TN is fortunate not to depend solely on the Colonial pipeline.'

'The greater challenge is that consumers are buying substantially more gas than usual,' said LeRoy. 'I talked to a retailer this morning who told me that he had an 8,500-gallon delivery yesterday that would normally last three days and it sold out in six hours.'

Emphasized LeRoy, 'We encourage consumers to maintain their normal fuel purchasing and driving patterns so that retailers have time to resupply the pumps.'”

Colonial Pipeline officials said Line 2, which did not have a leak, normally supplies diesel, jet fuel and home heating oils. They have moved gasoline onto Line 2 to minimize potential supply disruptions.

“I do not anticipate areas where motorists won’t be able to find gasoline, but you could see some locations in Tennessee where there are occasional outages of regular gas,” said Tom Kloza, Global Head of Energy Analysis for Oil Price Information Service. “This will not persist, and indeed the price increases you’ll see do not represent a trend.”

Despite the efforts to keep gasoline moving into the area, several people have reported big jumps in prices at many stations.

Due to the panic causing a shortage at many stations, companies like Mapco have released a list of gas stations where you can still find gas, but again, officials ask you to go about your normal routine instead of panicking and rushing to the pump.

If you see any gas station charging unreasonable prices, you can file a gouging complaint with the Tennessee Department of Commerce and Insurance by logging onto tn.gov/commerce or by calling 800-342-8385.