A Hendersonville teacher has made history once again, after Scott Wietecha won the St. Jude Rock ‘N’ Roll Marathon Nashville for an unprecedented fourth year in a row.

A Hendersonville teacher has made history once again, after Scott Wietecha won the St. Jude Rock ‘N’ Roll Marathon Nashville for an unprecedented fourth year in a row.

The 34-year-old crossed the finish line at 2:25:42, an amazing 9:01 before second place finisher, Brian Shelton, of Cookeville.

Shelton and Wietecha are friends, and according to Wietecha, he didn’t find out Shelton was running the marathon until Friday night.

“[Shelton] told me he was going all out, 100 percent,” said Wietecha. “Me? My preparation was like 85 percent. He was trying to be this sneaky little hobbit, stealing the dragon’s gold. All he did was wake up the dragon.”

Wietecha was joined by thousands of other runners from across the country and globe who all had different reasons to run.

The weather played a big role in the race. By the time all 30,000 runners got to the starting line at Broadway and 8th Avenue Saturday morning, they knew it was going to be a tough day.

All eyes were fixated on the radar and looking firmly at the skies. Heavy rain and lightning opened up for the better part of an hour, forcing officials to delay the start of the race multiple times.

Spectators and runners sported their most stylish trash bags and ponchos in a last ditch effort to stay dry during the delays.

The rain was actually a welcome sight compared to the heat during the 2015 race. Two years ago it poured for the better part of the race.

The 5K race finally got underway around 7:25 a.m., around 40 minutes behind schedule. Ten minutes shy of 8 a.m. the full and half marathon runners were off.

As the winner of last year’s race, Scott Wietecha wore the number 1 bib, and led all runners at the start.

This was his race. He never stumbled, never second guessed, and just kept going. He ran side-by-side with half marathon winner Roosevelt Cook from Oak Hills, California until just before mile 11. That was where the full marathon runners continued down Rosa Parks Boulevard for a five-mile loop around Metro Center, and half-marathon runners split down Jefferson Street and toward the finish line at Nissan Stadium.

Wietecha spent the rest of the race in solitude as he chased down course history. He became the first person ever to win a Rock ‘n’ Roll Marathon Series event four times.

Once he crossed the finish line he was given a medal by Cook, who also just happens to also be a physical education teacher.

First place in in the Women's full marathon went to 24-year-old Melanie Kulesz, of Oak Ridge, with a time of 2:59:12. It was also not her first time to win. She took more than five minutes off of last year’s winning time of 3:04:28.

Race officials said that even with the rain they only treated a handful of runners for minor injuries like exhaustion and dehydration. 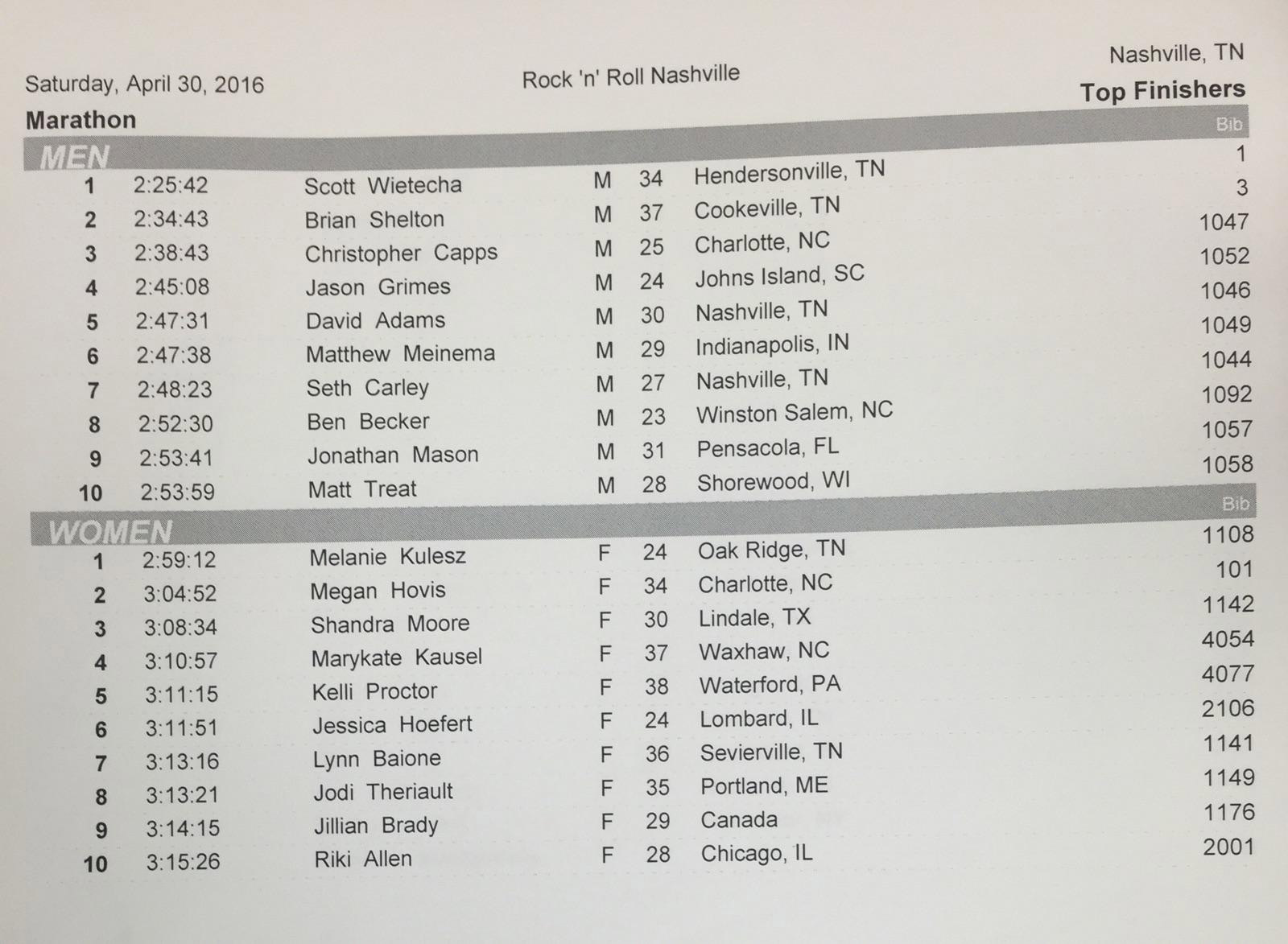 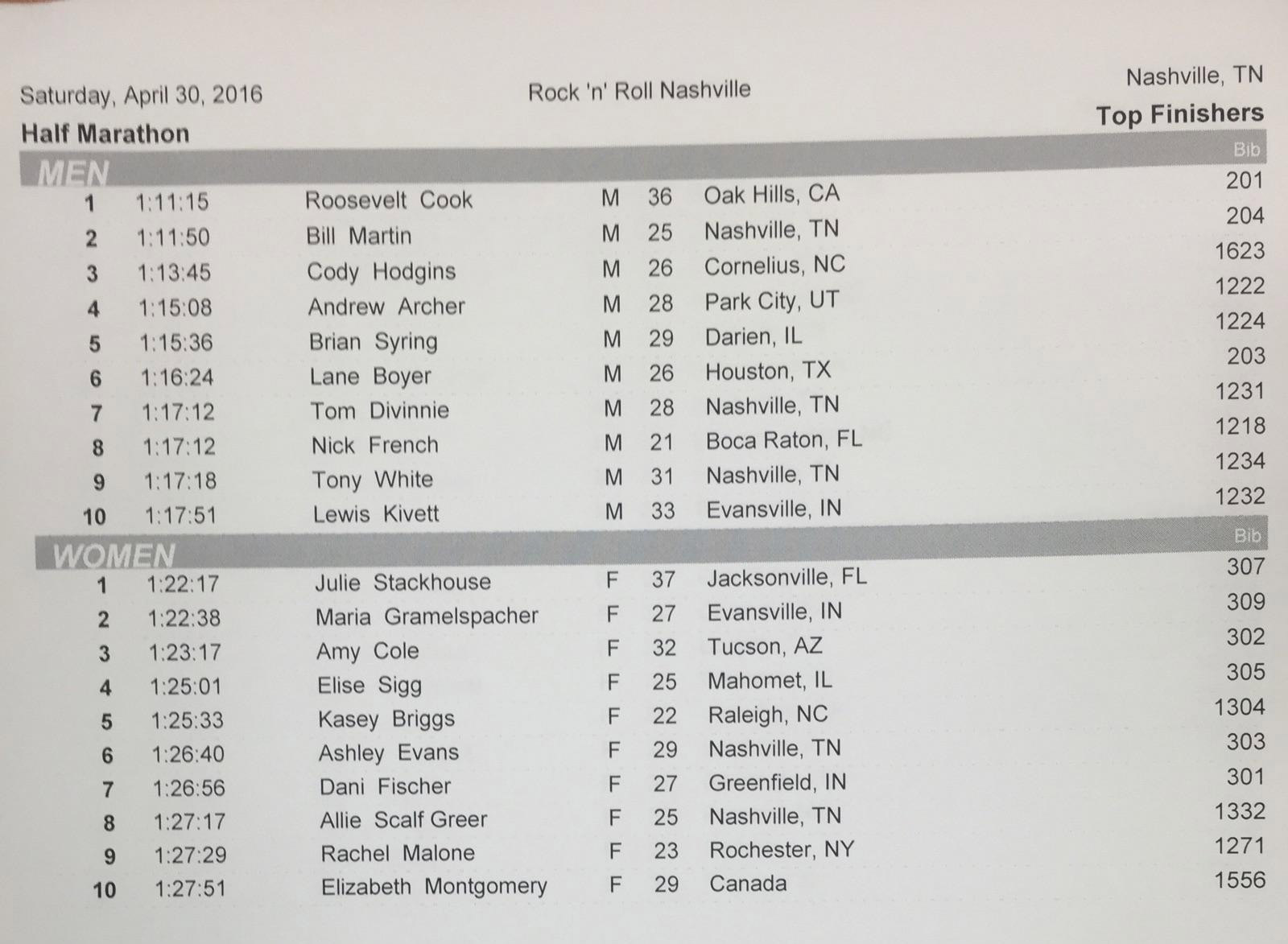 Our staff at NewsChannel 5 had a blast covering and participating in the races!

Those at the marathon, runners and supporters, had the chance to see many amazing things. From a firefighter -- reportedly from California -- running in full gear, to a group of hula-hooping racers!

The fun was set to continue Saturday evening with the tradition of great music as The Wallflowers were scheduled to take the stage for the Toyota Rock ‘n’ Roll Concert Series at Bridgestone Arena featuring Marc Scibilia as their special guest.