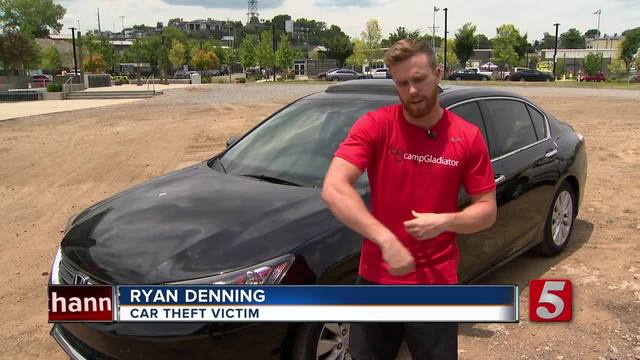 From 2014 to 2016, the number of car thefts reported to Metro Nashville Police rose steadily by a few hundred reports each year. But by 2017, the number of thefts nearly doubled from the year before and the city is on pace to meet, if not exceed, that number in 2018.

From 2014 to 2016, the number of car thefts reported to Metro Nashville Police rose steadily by a few hundred reports each year. But by 2017, the number of thefts nearly doubled from the year before and the city is on pace to meet, if not exceed, that number in 2018.

Police said a majority of thefts happen because a driver leaves their car unattended with the keys inside.

"They get out of the vehicle, go in to a store to pick up a cup of coffee or a drink," said Sgt. Chad Young, who works for Metro's Auto Theft unit. "There are individuals driving around that are looking for that opportunity to jump in a car that’s been left on and unoccupied and then take the vehicle."

Young said often, a stolen vehicle is used to commit other crimes, then dumped. That means police likely spend time processing the vehicle for evidence before the vehicle can be returned to its owner.

"I went out to my car to get some stuff before dinner and, without even thinking about it, I just threw my keys in there," Denning said. "Next thing I know, it’s gone like an hour later, so someone was probably watching me."

Denning's car disappeared from his girlfriend's driveway in Germantown. It turned up one week later in East Nashville - riddled with bullet holes, scraped on all sides and with stolen purses in the back seat.

He now double checks that his car is locked constantly.

"Really, really make sure you’re locking your car," Denning said. "It’s very easy to forget, especially if you’re not really thinking about it or if you’re tired."

Police said there are several ways you can protect your vehicle.

First, never leave your car running or unattended with the keys inside, even if you're only pumping gas.

Check to see if your car came with a valet key, which is often placed in hidden locations in your car or in the owner's manual. If you find one, remove it.

Don't leave your car windows cracked open and don't keep your spare keys inside your vehicle.

Park in public, open places when possible and make sure your doors are locked at all times. Never store valuables in your car that could attract thieves.