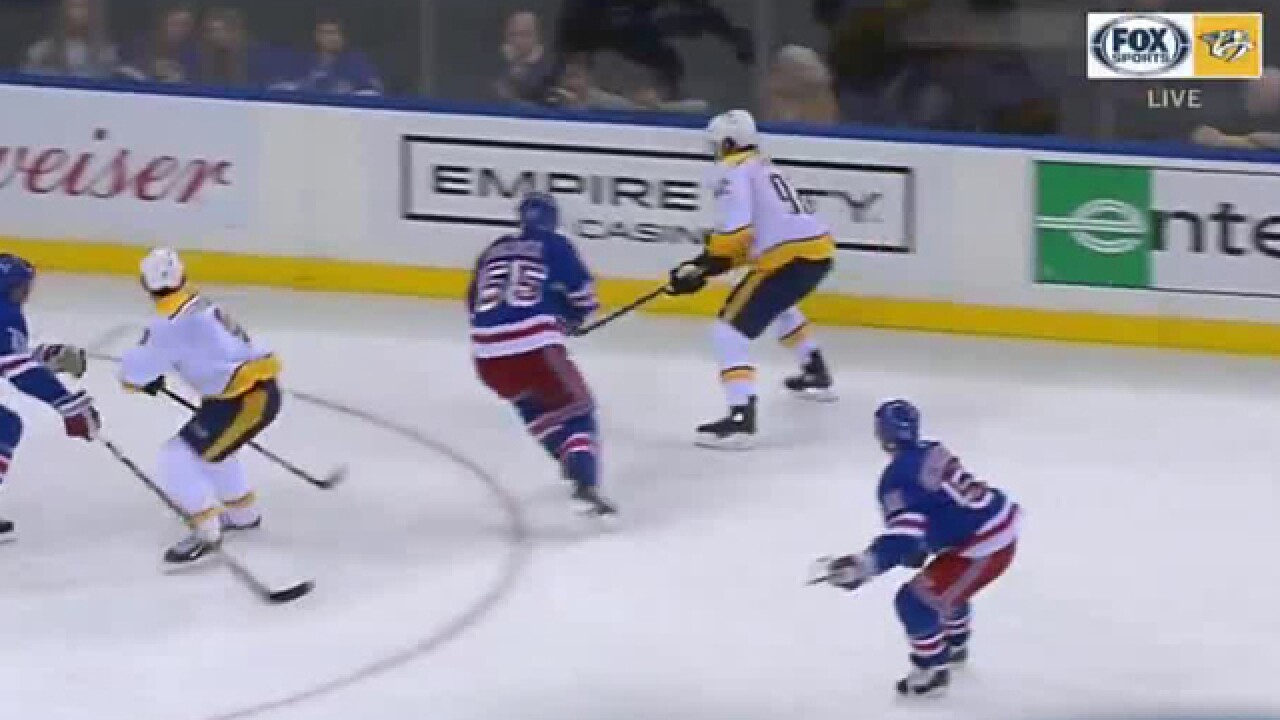 Kevin Hayes and Jimmy Vesey each had a goal and an assist to help the New York Rangers snap a five-game skid with a 4-2 win over the Nashville Predators on Saturday.

Chris Kreider added a power-play goal and David Desharnais extended his point streak to four games as the Rangers picked up their second victory of the season.

Mattias Ekholm and Fillip Forsberg each scored for Nashville, and Juuse Saros made 11 saves for the Predators.

The Rangers, who have struggled in first periods this season by allowing 13 goals in nine games, earned a two-goal advantage at the end of the first 20 minutes.

Jesper Fast tallied his first of the season just 5:12 into the game as New York scored the first goal for only the fourth time in nine games. Predators defenseman Alexei Emelin had trouble controlling a bouncing puck and Hayes was able to race up ice for a breakaway opportunity. Fast trailed the play and cashed in on the rebound.

After killing off three penalties of their own in the first 20 minutes, the Rangers power-play unit doubled their lead at 19:34. J.T. Miller was able to slip out of the corner with control of the puck and fed a wide-open Chris Kreider in front. It was only the second time this season that the Rangers have had a multi-goal lead.

Henrik Lundqvist made 23 saves for New York and picked up career victory No. 407. He is now tied with Glenn Hall for ninth place on the NHL's all-time wins list.

Early in the middle period, the Predators were able to cut the deficit in half. Defenseman Mattias Ekholm was able to walk into the slot all alone and blasted a slap shot past Lundqvist at the 1:44 mark of the second period.

Later in the second period, Filip Forsberg scored his sixth goal of the season when he deflected a soft Roman Josi wrist shot at 15:30.

However, later in the middle period, Hayes danced around defenseman Matt Irwin, and beat Saros on the short side with a pretty backhand, forehand maneuver to help the Rangers regain a two-goal advantage. Vesey and Brady Skjei assisted on the play.

With 4:30 remaining in the second period the Predators cut the Rangers lead in half once again. Filip Forsberg deflected a soft Roman Josi wrister as he tallied his sixth of the season, Ryan Johansen and Josi assisted on the play.

Vesey added an empty-netter in the final minute to secure the victory for New York. It was Vesey's first goal of the season.

The Predators have lost four consecutive games at MSG with their last win coming December 10, 2013.