Legendary Rocker Steven Tyler had people running all around Nashville on Wednesday as part of a scavenger hunt to get the chance to meet him and get VIP tickets to his weekend show at Fontanel. 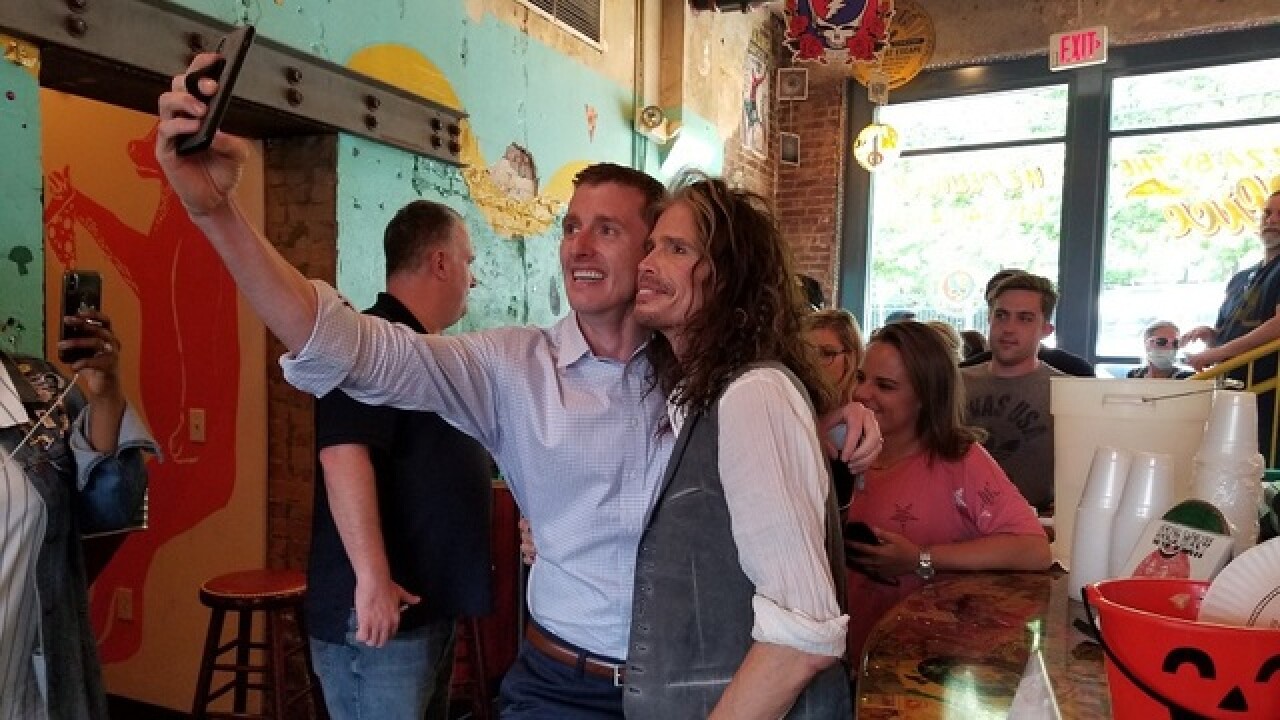 Legendary Rocker Steven Tyler had people running all around Nashville on Wednesday as part of a scavenger hunt to get the chance to meet him and get VIP tickets to his weekend show at Fontanel.

Tyler posted news of the scavenger hunt on his social media pages, letting people know that they'd be #SearchingForSteven if they had 'What It Takes.'

I'M HOSTING THE 1ST #SEARCHINGFORSTEVEN SCAVENGER HUNT - THE FIRST 5 WINNERS WILL WIN VIP TICKETS TO MY CONCERT IN NASHVILLE ON MAY 12 AND MEET ME AT THE FINISH LINE! START YOUR DAY MAY 9TH AT @HATTIEBS BROADWAY AND LET THE SPIRIT (AND THE CLUES) GUIDE YOU... pic.twitter.com/ES2RzGyyzk

When Wednesday morning arrived, plenty of people were lined up outside of Hattie B's in Midtown, but it wasn't for the 'Same Old Song And Dance' in hot chicken; Instead, they were waiting to get the first clue.

"This is something we'd never do typically, but when I saw it, I had to do it," Andrea Smotherman, a Steven Tyler fan, said.

Smotherman didn't 'Want To Miss A Thing' like this, as she's a huge Steven Tyler fan and has always wanted to meet him.

"I think I would cry, I don't know. I'd either be really cool or not cool at all," Smotherman said of meeting Tyler.

Once the doors opened at Hattie B's, the first 25 fans were given clues and told to 'Walk This Way' to the next clue.

"When you stand at 211 Printers Alley, take a selfie in front of the Out On The Limb banner, post it to your social with the #FindMeNashville, and head to Bourbon Street Blues and Boogie Bar. Show them your post to see the next clue," Is what the first clue said.

Once that clue was in hand, it was time to get 'Back In The Saddle' again to get to the next place.

The scavenger hunt took fans from Midtown to Printers Alley, to The Gulch, to 12 South, and finally back to Midtown where they ended their scavenger hunt at Two Boots pizza.

While they were 'Livin' On The Edge' during the hunt, the lucky few were rewarded. They were able to meet Steven Tyler, take selfies with him, and they were given VIP tickets to his show at Fontanel on the weekend.

"I've been waiting for this my entire life," Smotherman said, who now works in the music industry. "I wouldn't even appreciate music or work in music if it wasn't for Aerosmith or Steven Tyler. All that we could have hoped for happened today."

For the fans, it shows you can always 'Dream On,' and dream until your dreams come true. Especially if that dream is meeting Steven Tyler.

Limited tickets still remain for Tyler's show at Fontanel with The Loving Mary Band. They can be found through Ticketmaster.