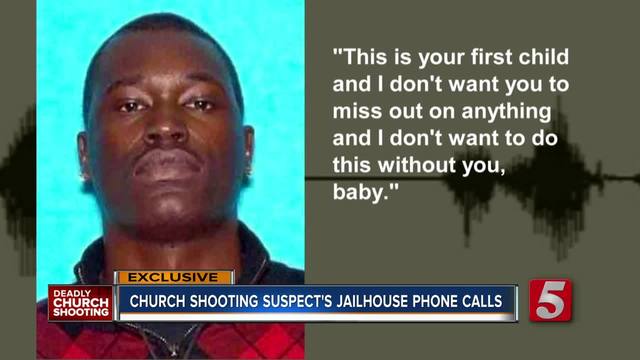 They filed an injunction which was denied by a judge. You have a right to see the content of these calls and Samson has a right to get a new attorney.

He was charged with killing Melanie Crow Smith and injuring six others in a shooting at Burnette Chapel Church of Christ in Antioch last month.

Since then he's been represented by the Metro public defenders office, but in one call he and his girlfriend discuss finding a new legal team and she claims lawyers are lining up.

"It's a well-known case. It's public. They know they are going to get a lot of publicity from taking the case and they are just waxing honestly," said his girlfriend.

Samson responded, "I didn't know not necessarily the severity, but I guess the limelight shown on this weakass case of mine."

He talks of hoping to get out of jail soon on bond. The reason? He's about to become a father.

"I know I am," said Samson. "Hey, like by any means baby. that's damn straight. Or die trying.

That is one of several times over several conversations Samson refers to dying.

There were reports that he was suicidal in recent months.

Here Samson talks about an argument with his girlfriend that led him to drive away from their home the morning of the church shooting.

"Everything about that day, man, dude. It's just like to say that I would be a fool to leave you," said Samson.

"You know what," said Samson. "You are right. That is exactly what I was saying to them or whatever."

Does that means Samson left the home that morning with plans to shoot up a church and possibly take his own life?

These recorded phones calls will likely play a role in his trial. If and when he is indicted a jury will decide.

Samson's attorneys are still seeking to block further release of any jailhouse phone calls claiming the content hurts their client's right to a fair trial.

We do have them all and Nick will be back with more stories, but as of Tuesday, a judge blocked the release of any more calls to other media.