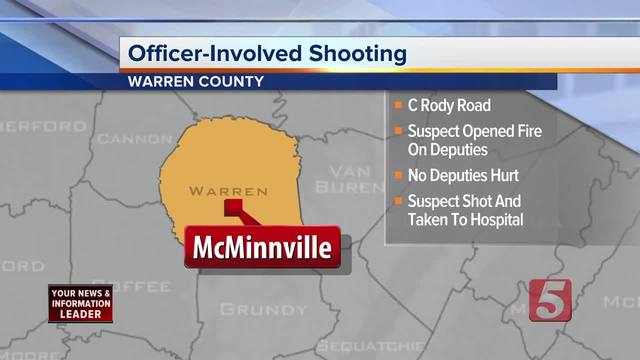 A suspect has been injured in an officer-involved shooting in Warren County.

A suspect has been injured in an officer-involved shooting in Warren County.

The incident was reported Monday morning in McMinnville. The suspect is accused of starting a garage fire on Tommy Dotson Road and Cookeville Highway in Overton County and threatening a sheriff's deputy.

The suspect was on his way to his in-laws in McMinnville when officials tried to pull him over.

At that point, a chase ensued and shots were fired. Tennessee Bureau of Investigation officials said the suspect turned down C Rody Road, turned his vehicle sideways, and began firing at officers.

Officers returned gunfire at the subject, who sustained injuries, and was transported by helicopter to a Chattanooga hospital.

Sources say the suspect fired more than 20 rounds during the shooting. No officers were injured.