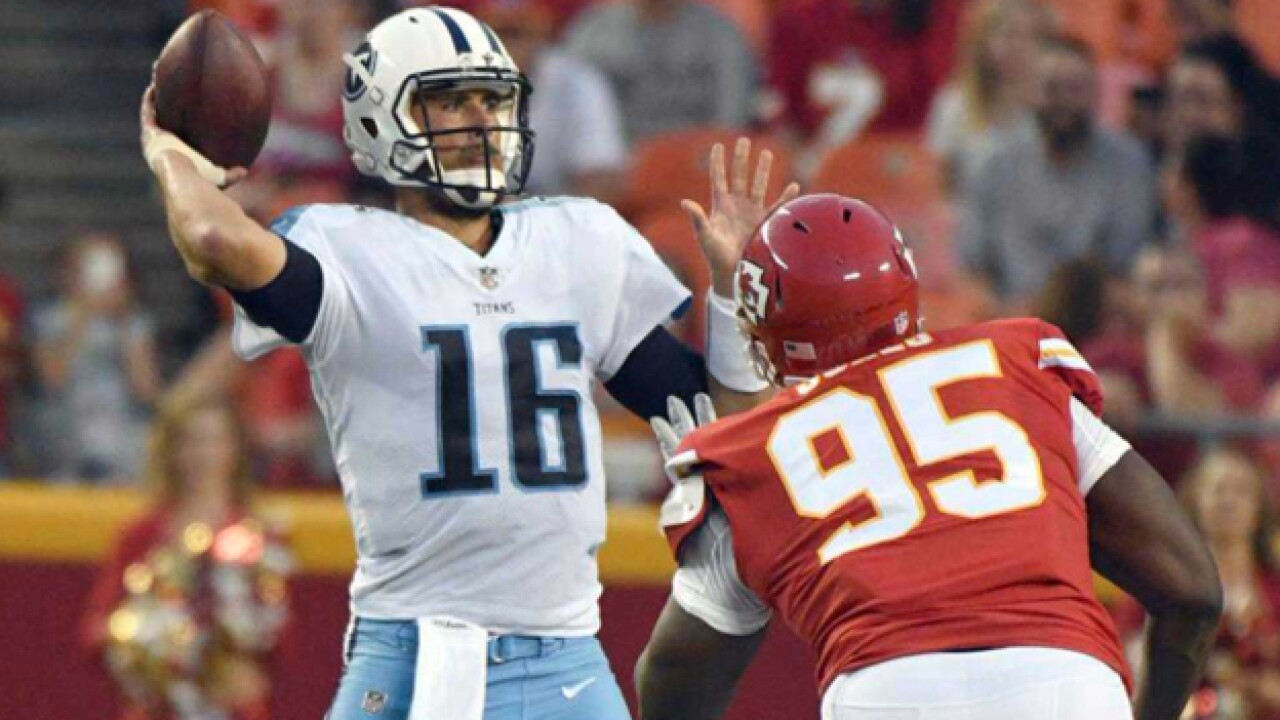 A disappointing preseason for the Titans mercifully came to an end Thursday night in a 30-6 loss to the Chiefs in Kansas City.

But let's face it, the NFL preseason is a joke.  And once again Thursday the Titans looked like a team that had about as much invested in the outcome of this exhibition game as the thousands of fans that routinely stay away from such unexciting affairs.

After contemplating playing his starters for a series or two, Titans coach Mike Mularkey thought better of it, resting all of his first team guys against a Chiefs team that did the same. So basically we learned on this night that the Kansas City backups were better than Tennessee's, many of whom won't still be around by Saturday afternoon when teams have to trim their rosters all the way down to the 53 players they plan to carry into the regular season.

Patrick Mahomes continued his brilliant preseason for the Chiefs, going 9-16 for 183 yards including a 32-yard touchdown pass to DeMarcus Robinson in the second quarter. Robinson had a monster game with three catches for 127 yards, blowing by Kalan Reed on the touchdown and victimizing LeShaun Sims on a 53-yard completion in the first quarter.

If there's one glaring concern that the Titans leave with from the preseason it's that the pass defense remains a major question. The unit which finished 30th in the NFL last year was supposedly upgraded with the additions of Logan Ryan in free agency and 18th overall pick Adoree' Jackson, but has been torched the last two weeks by rookies like Mahomes and Mitchell Trubisky of the Bears, and journeyman Mike Glennon.

The Titans figure to get a much better pass rush in the regular season with Pro Bowlers Jurrell Casey and Brian Orakpo back to lead the charge, but the defense on the back end has to be better before Derek Carr, Amari Cooper and the Raiders come to town in 10 days.

The bright spots for the Titans Thursday were David Fluellen, who further cemented his place as the team's third running back, rushing for a game-high 74 yards on 19 carries, and Jayon Brown, who continued his stellar preseason by making several plays in space including a near interception on an acrobatic catch attempt in the second quarter.

This was also the best preseason performance for outside linebacker Kevin Dodd as he continues to work himself back from the foot injury that sidelined him most of his rookie season. Dodd created pressure on quarterbacks a couple times and recovered a fumble, something the Titans hope can boost the former 33rd overall pick in the draft heading into the regular season.

All in all, this was another example of a "nothing much to see here" fourth preseason game.

The Titans finish with a dismal 1-3 preseason record, but Mike Mularkey told reporters on Tuesday that it has been a very productive preseason overall and that the team is far ahead of where it was at this point a year ago when it started the season 1-3, before turning things around to finish 9-7.

The best news yet for Mularkey and the Titans is the fact that the team escapes the preseason without any major injuries. Top draft pick Corey Davis returned to practice this week after missing almost the entire preseason with a hamstring injury and Eric Decker is also expected to be ready to go for the opener.

That means the Titans will have all hands on deck as they begin their quest for the team's first playoff berth since 2008.

And that remains the goal despite a frustrating preseason. It's time to flip the page because now the games count.