In Manchester, trees were knocked down and landed on homes.

It was a similar story in the Leoma community of Lawrence County.  Several trees snapped, or were uprooted.  There were also reports of flash flooding and power outages.

A massive tree landed on a home on Dunn Leoma Road.  The homeowner, Jerry Mattox, wasn’t home at the time.  After receiving a phone call about the damage, he rushed home to check it out.  The tree landed on the roof and caused extensive damage to the home.

Neighbors responded almost immediately to remove the tree and clear away the debris.

“They have probably been out here three or four hours,” said Madison Spurgeon, who lives in Lawrence County.  “They just started cutting limb by limb to push the tree away from the house.”

Mattox said the home had been in his family for more than 50 years.  He was planning to stay with family members while repairs were made.  He ultimately planned to rebuild the home.

Residents said the storms moved through the area quickly and brought heavy rain and strong winds. 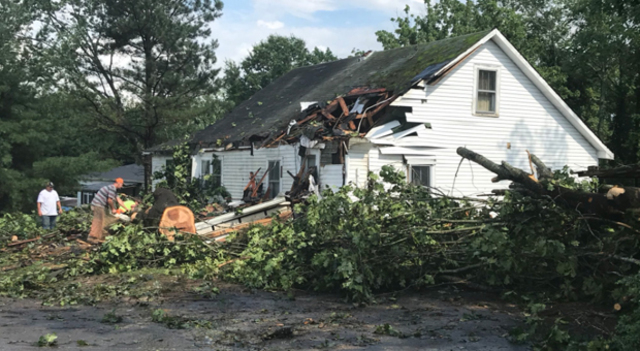 Officials with Lawrenceburg Utility told NewsChannel 5 they initially had around 3,000 customers without power due to storm damage, and just before 2:30 p.m. Saturday, they said they'd worked that number down to 650. All customers had power restored by 8:30 p.m. Saturday.

National Weather Service officials said at this time it appears to be straight line wind damage.

More severe storms rolled through the counties in the southern portion of our viewing area Saturday evening, bringing tornado warnings to Wayne and Lawrence counties. Check your latest forecast here.