TDOT crews worked throughout the night to salt bridges and overpasses as a round of light snow moved through the area.

A round of snow that moved through overnight prompted school closings and delays across Middle Tennessee and Southern Kentucky.

A Storm 5 Alert was issued for Sunday night through mid-morning on Monday. The biggest impact in our viewing area hit eastern counties in Tennessee and counties in Southern Kentucky.

Officials with Metro Nashville Public Schools said Sunday night they would be on a two-hour delay Monday. Additional school systems across the area also announced delays, including Sumner, Williamson, Cheatham and Montgomery counties.

Parts of western Kentucky could see a little more than an inch of accumulation. The plateau in Tennessee could see between half an inch to an inch in some areas. 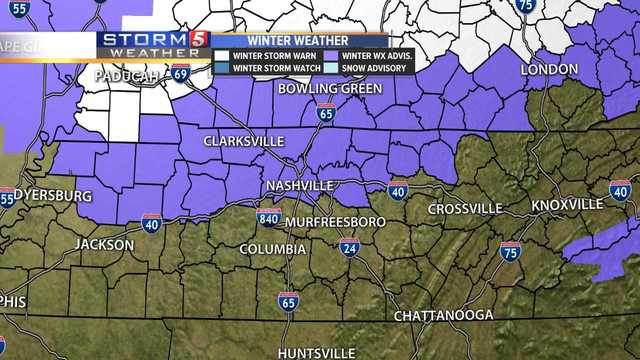 With the rain, elevated surfaces could see a chance of icy spots. Drivers were advised to take caution, especially during the Monday morning commute.

Crews with the Tennessee Department of Transportation loaded up at midnight at the salt barn. They began putting salt down on bridges and overpasses, since the rain and dropping temperatures have caused some ice concerns.

In Kentucky, road crews said they prepped the roadways in anticipation of the system that could cause hazardous driving conditions.