Pregnant women and patients paying with insurance are less likely to be accepted by treatment programs in parts of the nation that are disproportionately affected by the opioid crisis. That’s according to a new Vanderbilt study.

A growing concern across the country has been that treatment capacity hasn’t kept pace as the opioid crisis has escalated.

More than 42,000 Americans died because of an opioid-related overdose in 2016. That’s more than any year on record.

Therapies for opioid abuse, such as buprenorphine and methadone, have shown a reduction in the risk of overdose deaths.

For pregnant women abusing opioids, the benefits of these therapies extend to the baby. It’s more likely the child will be born at term with a higher birthweight.

The study was focused on four states. They found Tennessee, Kentucky, North Carolina, and West Virginia have the highest rates of opioid use in the U.S.

Those states are also more affected by overdose deaths from opioid use.

The research found only about 50 percent of opioid treatment providers took any insurance. There was also a large variance in programs that accepted Medicaid.

The study also discovered only 53 percent of outpatient buprenorphine would treat pregnant women.

Programs researched in those states were asked if they were accepting new patients or accepting pregnant patients. They were also questioned about insurance requirements, from Medicaid to private insurance and self-pay.

“We know that opioid agonist therapies work, but only a fraction of people that have opioid use disorder are actually getting them. With this study, we wanted to know if there were structural issues in terms of providers, or insurance type, or being pregnant itself, that may be a reason for that barrier,” said Stephen W. Patrick, MD, MPH, MS, director of the Vanderbilt Center for Child Health Policy, assistant professor of Pediatrics and Health Policy in the Division of Neonatology at Monroe Carell Jr. Children’s Hospital at Vanderbilt.

Pregnant women who were accepted to programs did have shorter wait times than others, according to the study.

“We need to know why — why is it that so many providers only take cash and why so few in some states take Medicaid. Then we need to craft policy solutions that increase the likelihood that people with opioid use disorder are able to get the evidence-based treatment that they need,” Patrick said. “At the end of the day, the people that have opioid use disorder, particularly pregnant women, need the treatment that we know is evidence based. We know many aren’t getting it and we are still seeing record highs of overdose deaths.”

Learn more in the infographic below provided through the study: 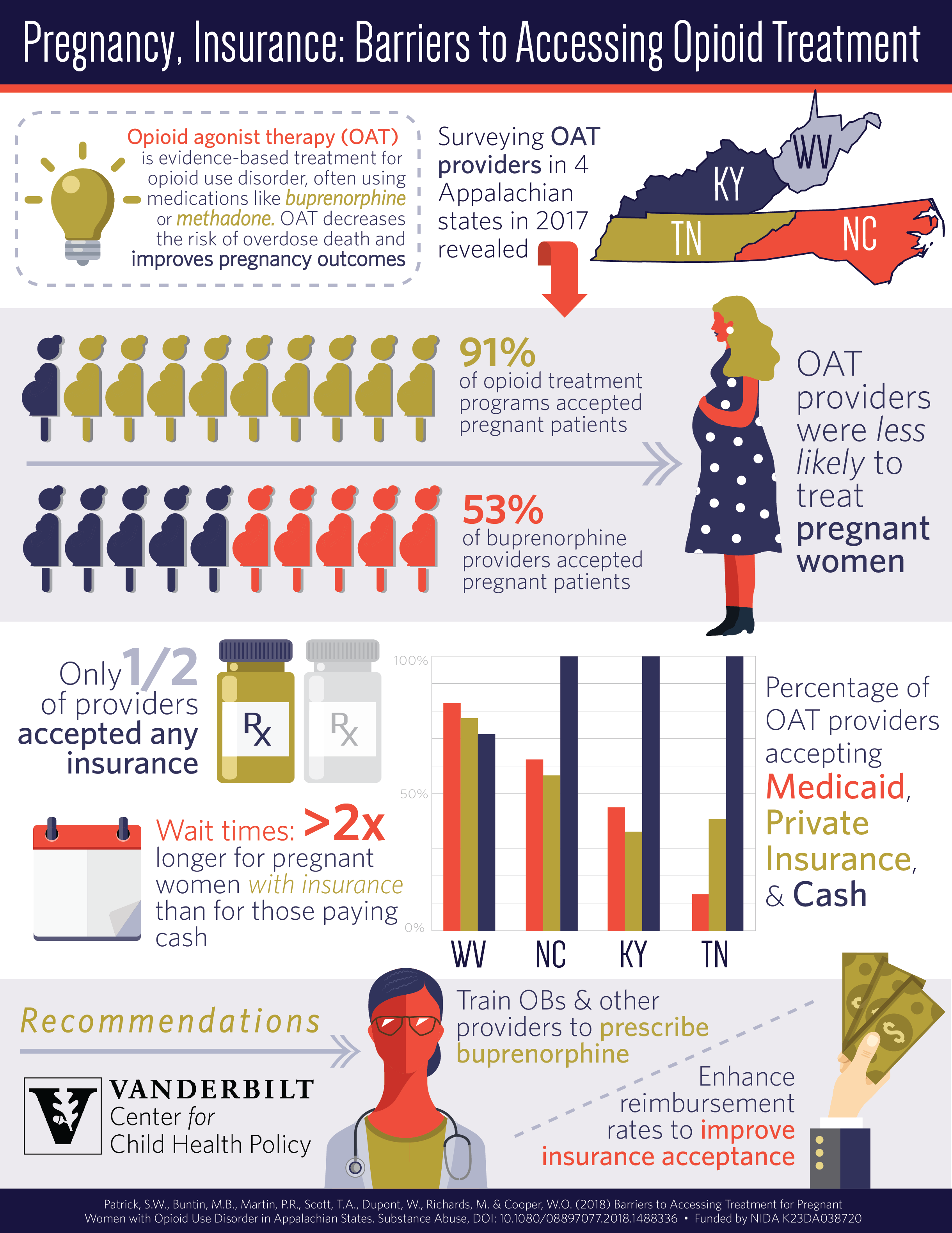