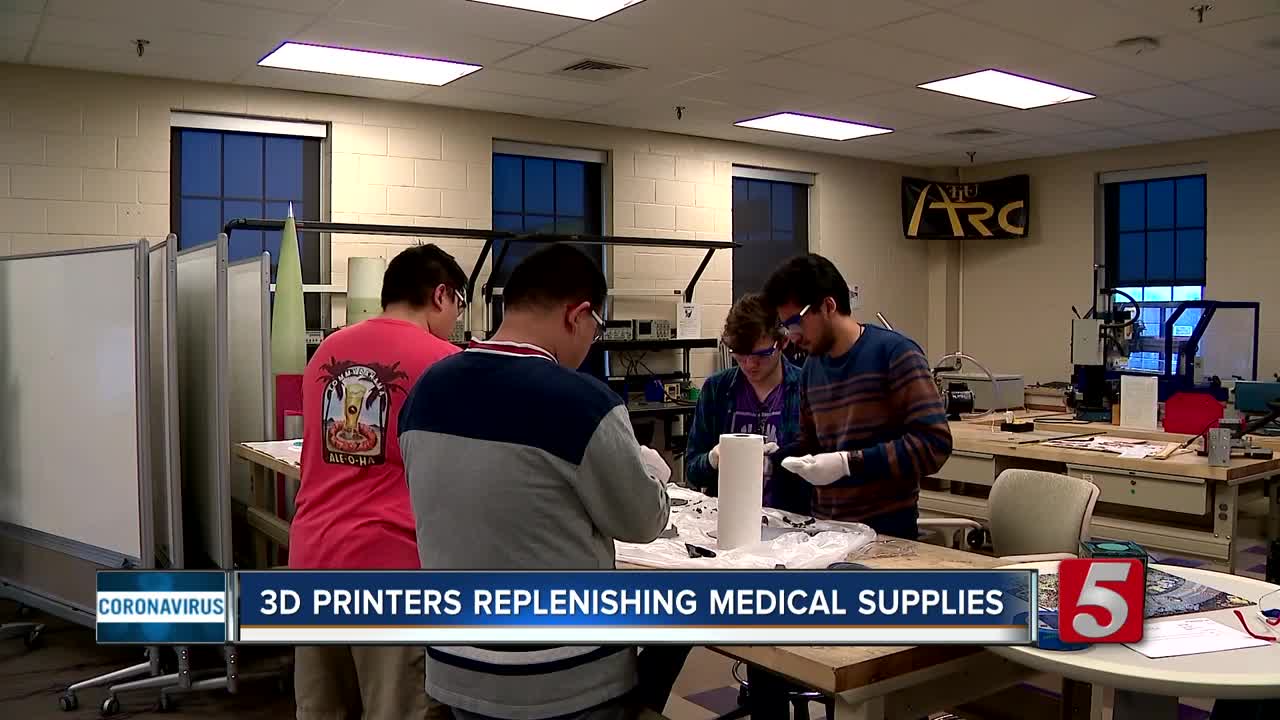 The statewide effort by several colleges to produce 3D printed bands for face shields is ramping up as hospitals deal with a shortage of medical supplies. COOKEVILLE, Tenn. (WTVF) — The statewide effort by several colleges to produce 3D printed bands for face shields is ramping up as hospitals deal with a shortage of medical supplies.

Tennessee Tech University in Cookeville is one of at least nine campuses across Tennessee to join a statewide initiative to use their 3D printers. Students and faculty created nearly 400 bands since Saturday, with a statewide goal of at least 10,000.

On Tuesday, members with the Tennessee Higher Education Commission spent the day picking up more than 2,000 bands the participating schools already made across the state including Tennessee Tech’s at Upper Cumberland Regional Hospital.

The bands will be shipped to Austin Peay State University in Clarksville where the face shields will be made and packaged. Officials with the Tennessee Emergency Management Agency will distribute them to an unknown number of hospitals that have requested the shields.

“We never thought we’d be making thousands of masks for a pandemic,” Kyle Wendt, a TN Tech College of Engineering student, told NewsChannel 5.

Wendt joined six other classmates, most of whom are international and stayed in town for their spring break to help print, to produce the bands consistently. There are close to 30 3D printers on campus working nonstop. Depending on the printer, it can take anywhere between two and four hours to create one piece.

“I’m getting a sense of how it will be in the real world,” Wendt said. “We’ve been here all day and night and I’ve been lucky to come in during the day but some of the graduate students, they’ve been coming in the middle of the night and come checking it.”

The university is also receiving help from STEM educators in Putnam, Jackson, Overton and Clay counties. Among the volunteers helping is Eric Demeri, a Capshaw Elementary School STEM teacher.

Demeri borrowed the 3D printers from his school and created a makeshift lab in his garage. Since receiving the call from TN Tech over the weekend, he produced at least 33 by Tuesday.

“Right now everybody is trying to keep within our social distances and being able to make something and share those things and help fight back is wonderful,” Demeri said.

Demeri is also helping print respiratory masks for a Massachusetts hospital using a furnace filter. He’s been told anything is better than nothing. His help is also being requested by Cookeville Regional Medical Center.

“I’m going to keep printing them until the end is no longer there and other companies step in and produce a lot faster than I can,” Demeri added.

Five manufacturing companies have contacted TN Tech interested in helping. While they have the capability of creating ventilator pieces, there’s been no instructions to print them so far.

Demeri said he will test out printing ventilator pieces with the copper material he ordered.