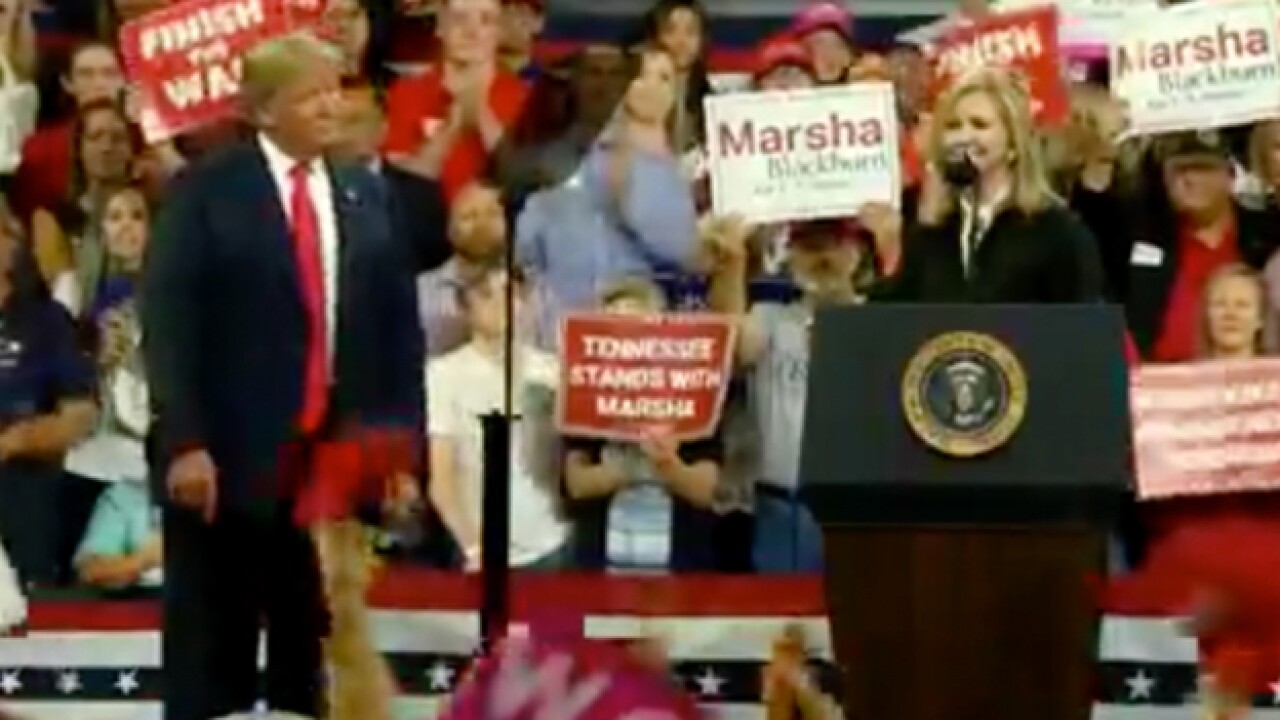 The President headlined a fundraiser then hosted a rally in Johnson City for Blackburn, who is in a tight race against Democratic ex-Gov. Phil Bredesen for the seat being vacated by retiring Republican Sen. Bob Corker.

Blackburn commended the President for his foreign policies and other successes while he's been in office.

"I know that the democrats keeps saying there is a blue wave coming, but let me tell you something. Mr. President when that blue wave gets to the state line it is going to run smack dab into the great red wall," Blackburn said, as she promised to stand with the President.

Trump said, "Phil Bredesen wants to raise your taxes. As governor he raised taxes and fees in your state by more than $1 billion. He supported driver certificates for illegal aliens. He doubled unemployment."

Bredesen responded to the President's comments with the following statement:

"Presidential visits are good for fundraising, but I've found that Tennesseans are independent thinkers who can make up their own minds. When I ran for Governor, President Bush came down so many times that I lost count and in the end, I won, because people in Tennessee like to think for themselves for these kinds of things. I’m much more interested in getting out there and talking with voters about the issues that matter, which is why I hosted a forum tonight in Chattanooga. Tennessee voters have a choice: if they want more of the same shouting and bickering from Washington, then I'm not their candidate. However, if voters want to hire someone who has a track record of getting things done for Tennessee, then I'm applying for the job."

“President Trump couldn’t have made the stakes more clear. A vote for Phil Bredesen is a vote for the failed polices espoused by Hillary Clinton – a candidate Bredesen enthusiastically supported in 2016. A vote for Marsha Blackburn is a vote to continue to success our country has seen over the last 20 months. Marsha knows that the tax cuts passed by Republicans and the drastic reduction in burdensome regulations has jumpstarted our economy. Tennesseans cannot afford the Bredesen/Clinton policies and that’s why Marsha Blackburn will be elected to the U.S. Senate.”

According to Tennessee Victory 2018, Trump has contributed at least $324,600 to Democratic political candidates and committees over the years. Click here to view the full spreadsheet.

“Donald Trump clearly has had a long-term love affair with Hillary Clinton, Chuck Schumer and the Senate Democrats,” Mark Brown, Tennessee Victory 2018 spokesman, said. “If Congresswoman Blackburn wants to make hay over someone’s contributions to Democrats, she might want to start by looking at the White House.”