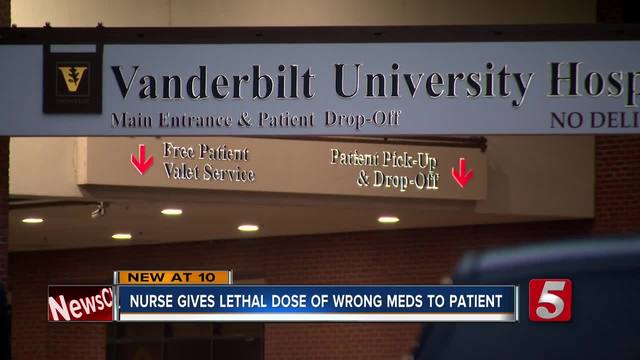 A report released from the Centers for Medicare and Medicaid Services says a patient died after a Vanderbilt University Medical Center nurse selected the wrong medication to give them, putting at risk the hospital's ability to receive Medicare payments.

A report released from the Centers for Medicare and Medicaid Services says a patient died after a Vanderbilt University Medical Center nurse selected the wrong medication to give them, putting at risk the hospital's ability to receive Medicare payments.

In fact, the paralyzing anesthetic that was given to the patient by mistake is one of the drugs Tennessee uses to execute death row inmates during lethal injections.

The incident happened in December of 2017. According to a report conducted by CMS, the patient checked into the hospital with a subdural hematoma and vision loss.

The patient was sent to the hospital’s radiology department for a full body scan. When the patient told caregivers they were claustrophobic, a doctors prescribed Versed, a standard anti-anxiety sedative.  The report from CMS said a nurse told the patient they were going to give them "something to help him/her relax."

The patient instead received a dose of vecuronium from that unnamed nurse.  Vecuronium is a neuromuscular blocking drug that causes paralysis.  As such, the CMS report says it can also stop the body from being able to breathe, in a painful experience for patients, who remain conscious and aware.

"Patients can experience intense fear when they can no longer breathe.  They can also sense pain,"
the report said.  "The experience can be horrific for patients."

The patient died later after being removed from a breathing machine.

That medication was vecuronium, not Versed.

The error had originally put the hospital's Medicare reimbursement status in jeopardy, but the Centers for Medicare and Medicaid Services announced Thursday that it had accepted a corrective plan submitted by the hospital, which allows the reimbursements to continue.  VUMC said it will continue to work with the Tennessee State Survey Agency to take corrective steps to protect the health and welfare of patients served by the facility.

“VUMC was notified of an adverse finding by the Tennessee Department of Health after an on-site survey involving a patient who died in December 2017 following a medication error. In reviewing the event at the time it happened, we identified that the error occurred because a staff member had bypassed multiple safety mechanisms that were in place to prevent such errors. We disclosed the error to the patient’s family as soon as we confirmed that an error had occurred, and immediately took necessary corrective actions (including appropriate personnel actions). We will continue to work closely with representatives of Tennessee Department of Health and Centers for Medicare and Medicaid Services to assure that any remaining concerns are fully resolved within the specified time frame,” said John Howser, Chief Communications Officer, VUMC.

Coincidentally, the drug the patient was supposed to receive -- the sedative Versed -- goes by the scientific name Midazolam, which is another drug used in Tennessee's death row inmate lethal injection protocol.