Who Will Sing The Anthem At Preds Playoff Games? 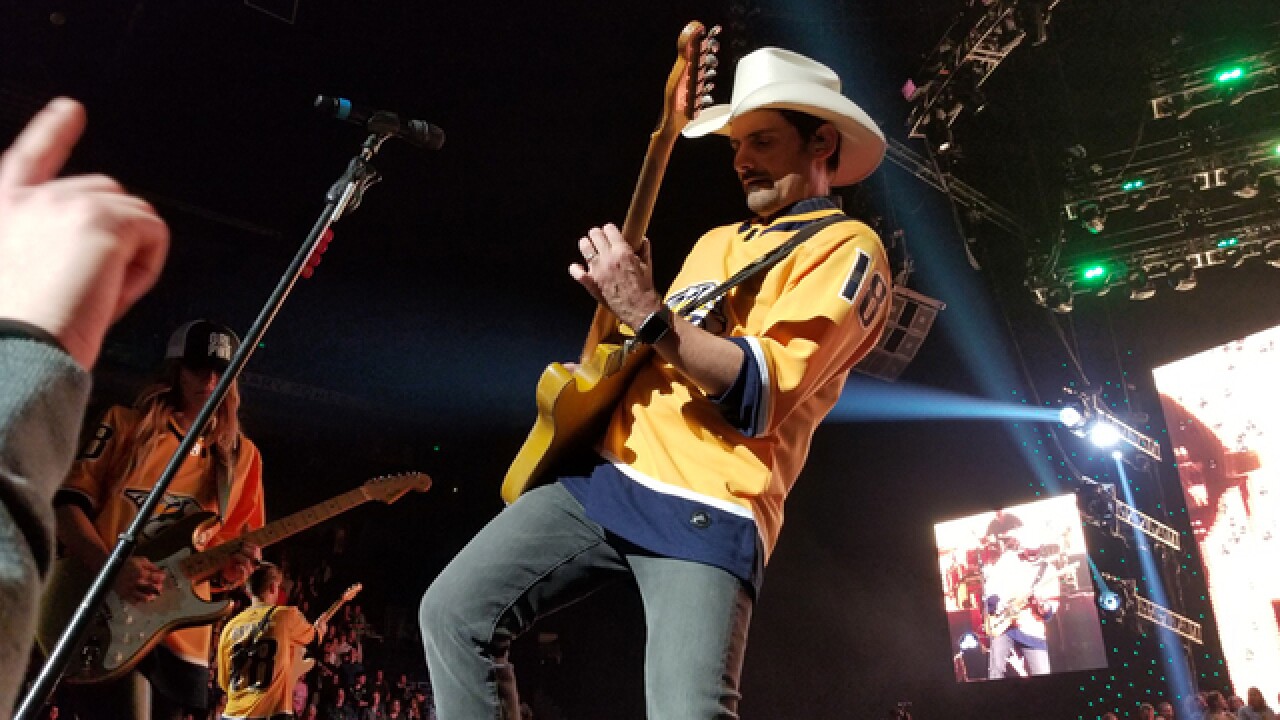 During the Predators’ 2017 Stanley Cup Playoffs run, music stars took the ice prior to puck drop to sing the National Anthem, which begs the question, who will perform prior to Predators games this playoff season?

Last year, Carrie Underwood kicked it off in Game 3 of the first round, the first game in Nashville. She was followed by her friends and fellow Nashville musicians, Luke Bryan, Little Big Town, Vince Gill and his daughters, Lady Antebellum, Dierks Bentley, Keith Urban, Kelly Clarkson, Martina McBride, Trisha Yearwood, and Faith Hill.

Predators President Sean Henry confirmed celebrity anthem singers and towel waivers will be back for the 2018 playoffs but gave no hints at who they could be.

Henry said he loves the tradition not just because of the excitement of seeing who will sing, but because he knows the people who are singing truly support the team.

“The people that you see on the ice, singing the anthem, waiving the towel, supporting the team and having fun with it, they’re fans,” Henry said. “We’re not flying people in and paying them some appearance fee just to do this for the exposure and media, these are people that want to be a part of it, and if the schedules allow, it’s pretty powerful when they can be out there, because they’re season ticket holders, they’re suite holders, they’re longtime supporters or engrained in what our normal game presentation is.”

So let’s get down to the details, who could sing? NewsChannel 5's music reporter, Jesse Knutson, took some guesses.

Beyond the people who sang last year, who we would love to hear sing again and not complain for a second (because they were all fantastic), here are some options:

Dolly Parton
Dolly Parton is one of the most recognizable people from Tennessee. She was born and raised in East Tennessee, and there are few people who love Tennessee and everything about it more than Parton, and very few have had the impact on Nashville that Parton has had.

Brad Paisley
Paisley has co-hosted the CMA Awards for a decade and has become a great figure for Country Music. He’s also a big Predators fan.

This year Paisley joined Rob Hendon in painting a new mural in Bridgestone Arena that revolved around the Predators, with a catfish and all.

Also, at Paisley’s April 6th concert, he, along with his tour mates, came out on stage in Predators jerseys. He also incorporated Predators video into his set, and made numerous mentions of “Smashville” and the Predators during the show.

Tim McGraw
Last year McGraw took the ice to wave the rally towel after Faith Hill sang the anthem. McGraw is a longtime Preds fan, and his song “I Like It, I Love It” plays after every Predators goal scored in Bridgestone Arena.

If McGraw sang the anthem, it would be a great addition if he took the Band Stage in between periods to play “I Like It, I Love It,” or he could do it right after the Preds score a goal, if that could be worked out.

Reba
Reba is hosting the ACM Awards, so she’ll be a little busy for the first round, but there’s no doubt that Reba would get the crowd excited at Bridgestone Arena.

While Reba wasn’t born in Nashville, she has become synonymous with the city, universally loved by all Country Music fans, and even people who aren’t fans of her music, thanks to her TV show and her infectious personality.

Taylor Swift
Swift has been seen wearing Predators jerseys in the past, and she recently played a show at the Bluebird Cafe, showing her love for Nashville remains, even though she left the genre of Country Music.

Justin Timberlake
Timberlake moved to Williamson County from Memphis recently and is a huge sports fan. While he shows his love of the Memphis Grizzlies outwardly, he has yet to perform or make a highlighted appearance at a Predators game.

Timberlake has been getting more involved in Middle Tennessee projects, becoming a partner of Pilgrimage Festival in Franklin, so maybe singing the anthem at a Predators game would be the next step of becoming a Nashvillian.

Kacey Musgraves
Musgraves released a new album last week and raced to the top of the charts. She’s been to Predators games in the past, and could be a great pick to sing the anthem.

Chris Young
Young grew up in Murfreesboro and has lived in Middle Tennessee his whole life. If you’ve been in Nashville for all of the Predators 20 years, it would be hard not to be a fan and support the team. With 10 #1s under his belt, he would be a great pick to sing the anthem.

Brothers Osborne
T.J. and John Osborne have a new album coming out on April 20th, and they’ve shown plenty of Predators pride while they’ve lived in Nashville. Last year, the duo played the Band Stage during the Stanley Cup Playoffs, and they went to numerous games both during the regular season and playoffs.

Hunter Hayes, Lauren Alaina, Charles Esten, and Lee Greenwood, all played the Band Stage last year as well, and could have an expanded role if they return to Bridgestone this post-season.

CeCe Winans lives in Nashville, has won 12 Grammy Awards, and is the best-selling female gospel artist of all time. No doubt she would give an incredible rendition of the anthem.

Peter Frampton
The rock God has called Nashville home for years, and if you put him and a guitar together, amazing things happen. The same could be said for Jack White, who just released a new album, is planning on touring, and calls Nashville home.

Plenty of groups live in Nashville and could be great towel waivers.

Those groups include Kings of Leon, Moon Taxi, and The Black Keys.