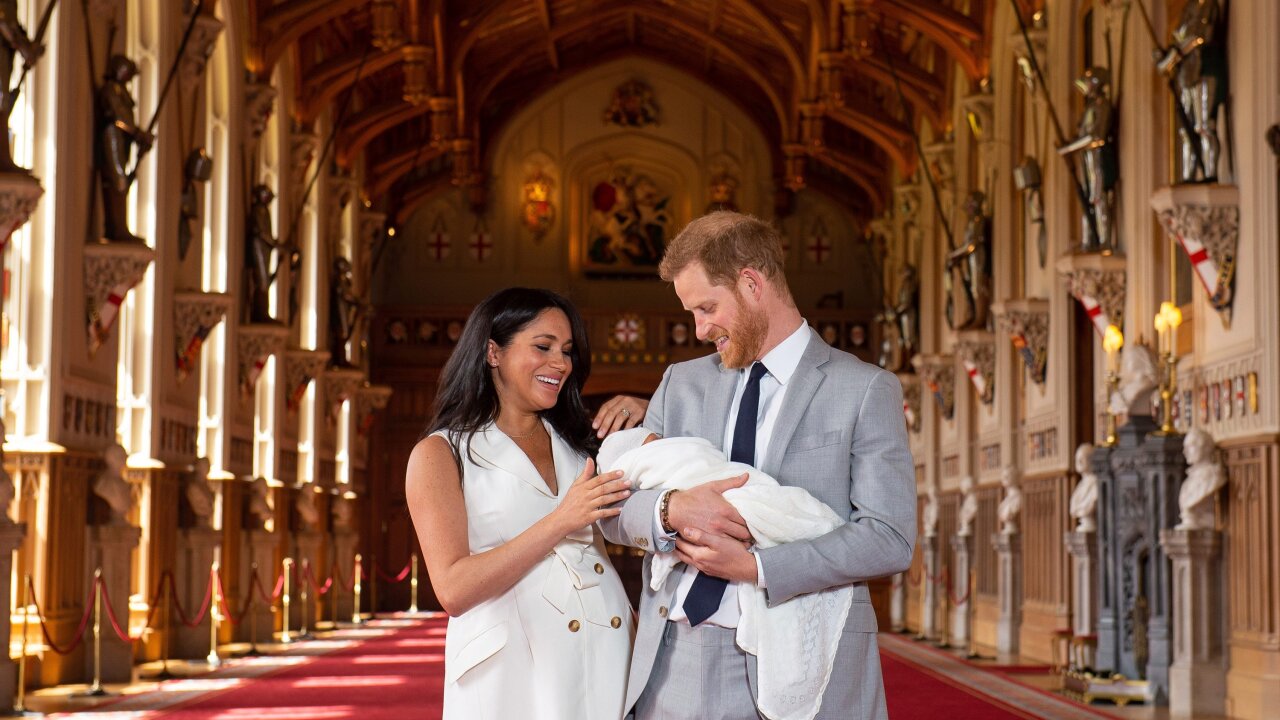 The Duke and Duchess of Sussex have released a new image of their son, Archie Harrison Mountbatten-Windsor, in honor of Father's Day.

The couple also posted a photo in May in honor of Mother's Day in the many countries across the globe that celebrate it, including Meghan's native America.

"Paying tribute to all mothers today -- past, present, mothers-to-be, and those lost but forever remembered," the post stated, "We honor and celebrate each and every one of you."

The photos are the only times that Archie has been seen since he was presented to the world in St. George's Hall in Windsor Castle only days after his birth on May 6.

New details have just emerged about Archie's christening, which is set to take place at St. George's Chapel in Windsor Castle in July, according to The Sunday Times .

Richard Fitzwilliams, a royal expert, told CNN that the christening will almost certainly take place at the chapel as it is where Harry was christened in 1984, and where he and Meghan tied the knot in May 2018.

More recently, the chapel has played host to the weddings of Prince Andrew's daughter Princess Eugenie to Jack Brooksbank in October 2018, and Lady Gabriella Windsor to financier Thomas Kingston in May 2019.

Yet despite Meghan's push for modernity, which has included championing women's rights, the christening is expected to be a traditional affair, Fitzwilliams added.

Archie will reportedly be baptized with water from the River Jordan, which holds particular significance for the Jewish and Christian faiths, as it is believed to be where Jesus was baptized by John the Baptist.

The paper added that the royal baby will also be dressed in an exact replica of the historic royal christening gown, which was commissioned by Queen Victoria and first used in 1841 for the baptism of her eldest daughter, Princess Victoria.

The original, which was made from Spitalfields silk and Honiton lace, was worn by 62 royal babies, including Queen Elizabeth at her christening in 1926, Prince Harry and Prince William.

A replica of the gown was commissioned by the Queen in 2004, however, as the original was deemed too fragile for further use. The most recent royal babies to don the replica were Prince George in 2013 and Princess Charlotte in 2015.

The christening will also feature the Lily Font, a silver-gilt receptacle which was commissioned by Queen Victoria in 1840, the Sunday Times added.

The font, which is stored at the Tower of London when not in use, has been used for the christenings of all of the Queen's children and grandchildren, excluding Princess Eugenie.

Fitzwilliams noted that royal christenings are often small and private affairs, which are attended by "senior royals, family, close friends and the godparents and their spouses."

The Queen is nevertheless expected to be absent at the celebrations due to prior engagements, according to the newspaper. While the monarch attended the christenings of Prince George and Princess Charlotte in recent years, she was noticeably absent from Prince Louis's baptism last year.

The ceremony is expected to be conducted by the Dean of Windsor, The Right Reverend David Conner, and the Archbishop of Canterbury, Justin Welby, who is head of the Church of England.