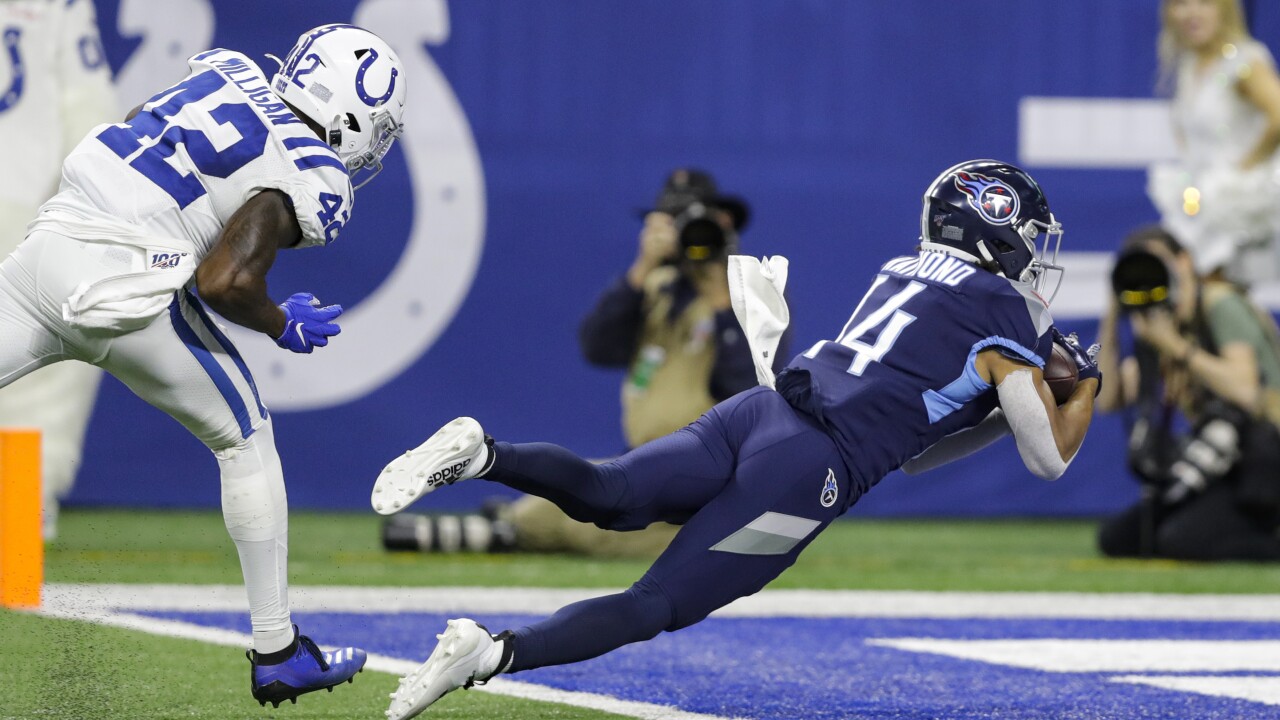 Darron Cummings/AP
Tennessee Titans wide receiver Kalif Raymond (14) dives into the end zone after a catch behind Indianapolis Colts defensive back Rolan Milligan (42) during the second half of an NFL football game in Indianapolis, Sunday, Dec. 1, 2019. (AP Photo/Darron Cummings)

INDIANAPOLIS (AP) — Tye Smith returned a blocked field goal 63 yards for the go-ahead touchdown with 5:02 left to play Sunday, helping Tennessee turn the tables at Indianapolis with a 31-17 victory.

The Titans (7-5) snapped a three-game losing streak in the series, winning for only the third time in the past 17 meetings. It also allowed Tennessee to leapfrog the Colts in the AFC South.

Adam Vinatieri missed three field goals for Indy (6-6), with two being blocked including the decisive kick that Dane Cruikshank got his hand on. Vinatieri has missed 14 kicks this season -- eight field goals and six extra points.

But Vinatieri's misses weren't the Colts' only problem.

Jacoby Brissett was picked off twice with the first resulting in a 31-yard field goal that tied the score at 17 late in the third quarter and the second resulting in Ryan Tannehill's 40-yard TD pass to Kalif Raymond with 3:02 left that sealed the victory.

Indy also lost a fumble deep in Tennessee territory with two minutes left when the Titans won a challenge.

It was that kind of day. Derrick Henry carried 26 times for 149 yards and one touchdown, becoming the first runner to top the 100-yard mark against Indy in 30 games. Tannehill was 17 of 22 with 182 yards and two TD passes as he improved to 5-1 as Tennessee's starter.

Brissett wound up 25 of 40 with 319 yards, one touchdown and two interceptions and the Colts rushed for just 82 yards on 24 carries.

Titans:
Allowed five sacks in the first half but only one in the second half.
Henry became the first Titans running back to surpass 1,000 yards rushing in consecutive seasons since Chris Johnson in 2012-13.
Linebacker Harold Landry got a sack in his fifth straight game.

Colts:
Vinatieri missed a 55-yarder that sailed wide right and a 53-yarder that was blocked in the first half.
Jack Doyle caught six passes for 73 yards, including a 21-yard TD pass to open the game.
Indy forced two turnovers.

Titans: Finish a two-game road trip next Sunday at Oakland.