Several schools have been celebrating homecoming, and for those at Middle Tennessee State University, their homecoming, called "Raider-opoly,” started off with a parade.

Murfreesboro Mayor Shane McFarland graduated from the school in 1997 and led the parade as grand marshal.

President Sidney McPhee walked in the parade, taking time to snap some selfies along the way. 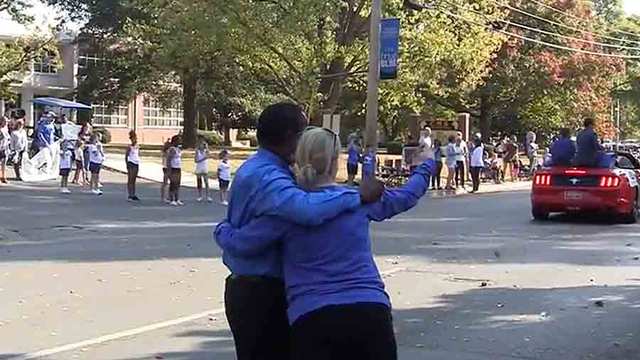 The game against Western Kentucky University kicked off at 1:30 p.m. Saturday. Unfortunately for the Blue Raiders, they fell in the end, losing to WKU by a score of 44-43.

Anthony Wales ran for three touchdowns and Deon Yelder blocked an extra point in the second overtime to lift Western Kentucky over Middle Tennessee 44-43 on Saturday.

Middle Tennessee's Brent Stockstill threw a 5-yard touchdown pass to Dennis Andrews in the second OT but Canon Rooker's PAT was blocked. Wales bullied in from the 1-yard line and Skyler Simcox made the PAT to end it.

White drove the Hilltoppers 77 yards in 10 plays to the Blue Raiders' half-yard line with 14 seconds left in regulation. Middle Tennessee forced an incomplete pass on third down, and Simcox kicked an 18-yard field goal to send it to overtime.

Stockstill threw for 434 yards and three touchdowns for Middle Tennessee (4-2, 2-1). I'Tavius Mathers had 143 yards rushing and two scores. Richie James broke his own program record with 16 catches and had 233 yards receiving.