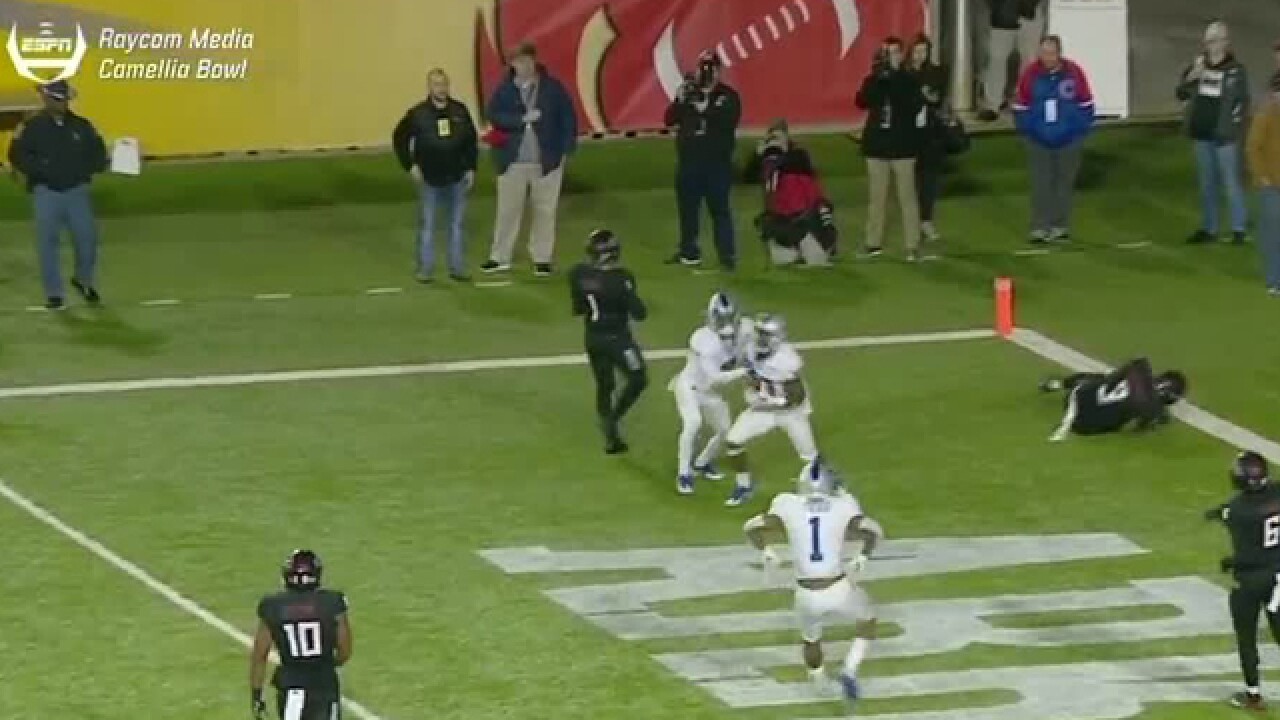 Brent Stockstill passed for 232 yards and two touchdowns and Middle Tennessee came up with some key stops to hold off Arkansas State 35-30 in the Camellia Bowl on Saturday night.

The Blue Raiders (7-6) ran out most of the final five minutes with a series of short passes from Stockstill after losing much of an 18-point lead over the Red Wolves (7-5).

That capped a wild game that included DJ Sanders' 54-yard fumble return for a touchdown, six turnovers and 17 penalties.

The Blue Raiders won four of their final five games after Stockstill's return from a shoulder injury that sidelined him for half the season. He was intercepted three times.

The Red Wolves had cut a 28-10 deficit down to 35-30 on Justice Hansen's 41-yard touchdown pass to Christian Booker with 5:03 left. Middle Tennessee milked most of the clock before punting.

Arkansas State was flagged for running into the kicker, a 5-yard penalty that wasn't enough for a first down that would have effectively ended the game. The Red Wolves couldn't get to midfield.

Hansen completed 31 of 57 passes for 337 yards with three touchdowns and one interception. He had a 2-yard touchdown pass to Warren Wand after Arkansas State converted a fake punt with Cody Grace's 21-yard pass to Chris Murray on fourth and 14. The two-point attempt failed.

Stockstill then swiftly gave the Blue Raiders a bigger cushion with a pair of big plays. He hit CJ Windham on a 34-yard catch and then threw a 30-yard touchdown to Shane Tucker.

Arkansas State then marched down to Middle Tennessee's 1 with help from a couple of pass interference calls but the Blue Raiders held with Darryl Randolph's tackle for loss and an incompletion.

Arkansas State: Is 3-4 in bowls over the last seven seasons. Outgained Middle Tennessee 462-352. Justin McInnis had seven catches for 107 yards.

Middle Tennessee: Finished strong after only clinching bowl eligibility with a win over Old Dominion in the regular season finale. Had 10 penalties for 87 yards.

Arkansas State's Hansen and leading rusher Warren Wand both return on the offense, but tight end Blake Mack and left tackle Jaypee Philbert are seniors, and so is Holland-Jones and star defensive back Blaise Taylor.