No. 25 Vols Use Fast Start To Breeze Past Indiana State 42-7 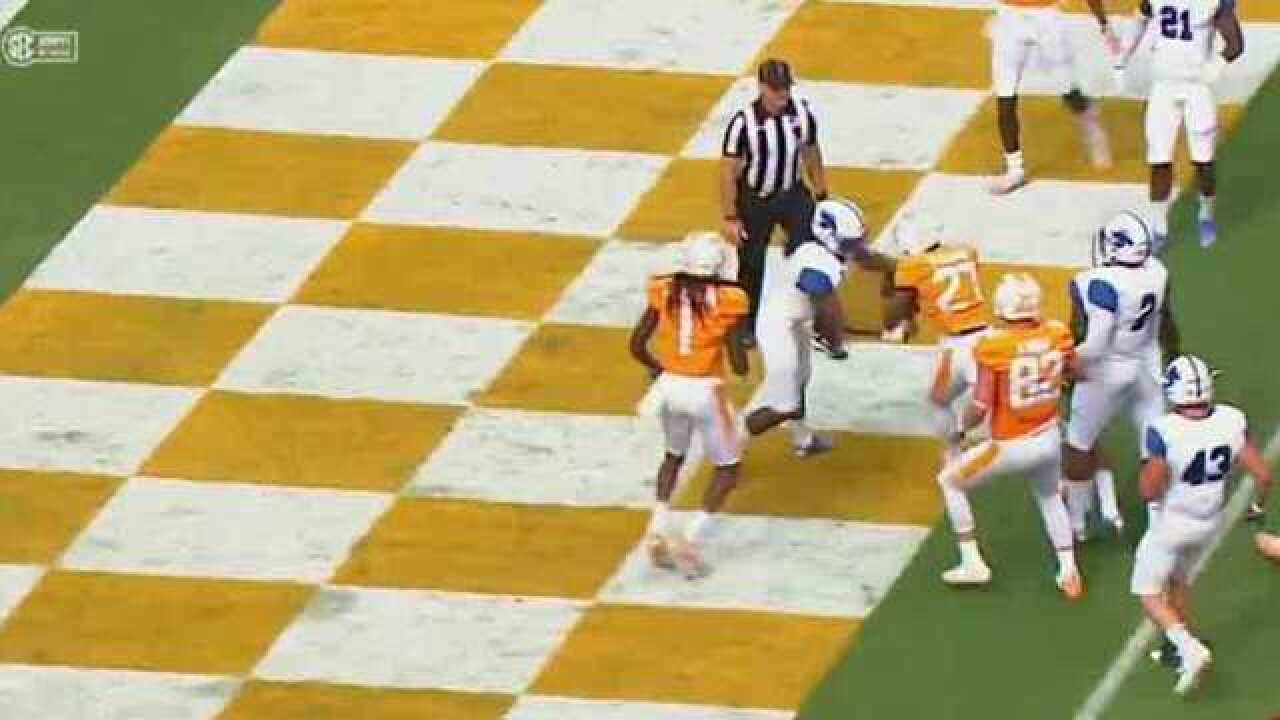 Ty Chandler returned the opening kickoff 91 yards for a touchdown, Carlin Fils-aime had two scoring runs and No. 25 Tennessee breezed to a 42-7 victory over Football Championship Subdivision program Indiana State on Saturday.

Five days after John Kelly ran for four touchdowns in Tennessee's 42-41 double-overtime triumph over Georgia Tech, he shared the spotlight with his backups in a game that had much less suspense. Kelly ran for 80 yards and caught five passes for 60 yards to lead the Volunteers (2-0) in rushing and receiving, but two guys below him on the depth chart scored Tennessee's first three touchdowns.

Chandler took the opening kickoff just to the right of the right hash, easily shed an attempted arm tackle as he approached his own 35 and ran untouched the rest of the way. Chandler is the first Tennessee true freshman to score on a kickoff return since Leonard Scott did it against Georgia in 1999.

Fils-aime, who didn't have a single carry against Georgia Tech, scored on two of his three rushing attempts Saturday. His 4-yard burst up the middle and 30-yard sprint around the left end put Tennessee ahead 21-0.

The Vols made it 28-0 late in the second quarter on Quinten Dormady's 19-yard pass to Brandon Johnson, the first career touchdown for the son of former major league catcher Charles Johnson.

Dormady had played the entire Georgia Tech game after winning a preseason competition with redshirt freshman Jarrett Guarantano. Both quarterbacks played Saturday, with Guarantano making his college debut on Tennessee's third possession of the game.

Indiana State: The Sycamores (0-2) have a quality running back in LeMonte Booker, who followed up his 154-yard performance against Eastern Illinois by rushing for 76 yards on 15 carries.  Now they need to find some balance on offense. Quarterbacks Cade Sparks and Isaac Harker are a combined 16 of 38 so far this season.

Tennessee: The competition was much less imposing, but this still represented a step forward for Tennessee's defense as it heads into Southeastern Conference competition. Indiana State went 0 of 11 on third-down attempts and scored its only touchdown after recovering a fumble in Tennessee territory. The Vols had given up 535 yards rushing against Georgia Tech, the highest single-game total Tennessee has ever allowed.

Indiana State: At Liberty on Sept. 16.