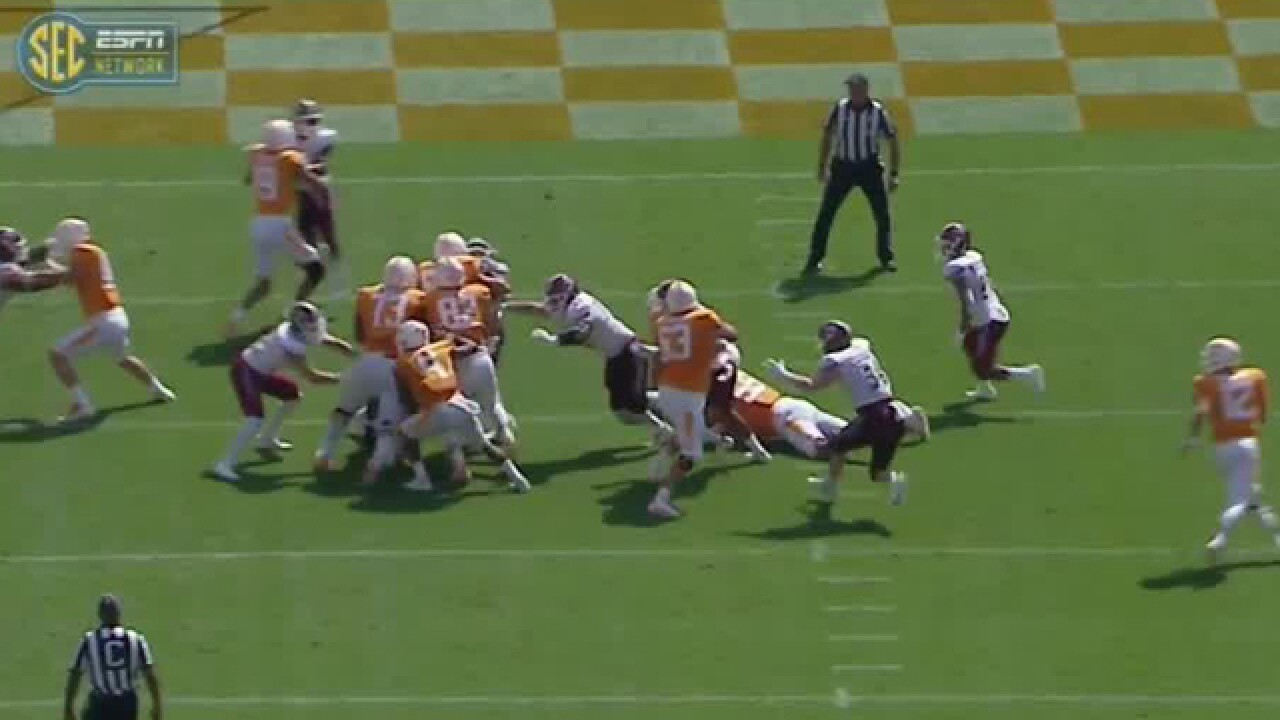 John Kelly rushed for 101 yards with a touchdown and Tennessee's defense recorded seven sacks on Saturday as the Volunteers staggered to a 17-13 victory over 27 1/2-point underdog Massachusetts.

Tennessee (3-1) was trying to bounce back from a 26-20 loss at No. 20 Florida in which the Vols allowed a tiebreaking 63-yard touchdown pass as time expired. Tennessee coach Butch Jones' staff was roasted all week for everything from Tennessee's red-zone play calling to its defensive strategy on the game's final play.

The Vols' performance against UMass (0-5) won't quiet that criticism. Tennessee struggled to put away a winless team that played the entire game without star tight end Adam Breneman and most of the second half without starting quarterback Andrew Ford due to injuries.

Tennessee was held scoreless for the game's first 25-plus minutes and final 22 minutes. The sluggish performance and the summer-like conditions resulted in a sterile atmosphere at Neyland Stadium. Although the announced attendance was 95,324, there appeared to be approximately 30,000 or so fewer fans than in the fourth quarter as UMass attempted to rally.

UMass threatened to take the lead with less than 10 minutes left when Andy Isabella's 42-yard run put the Minutemen at the Tennessee 38. But the Minutemen went backward from there -- thanks in part to a Jonathan Kongbo sack -- and punted on fourth-and-16 at the 44.

The Minutemen's next drive stalled after UMass got as far as Tennessee's 45. Tennessee clinched the victory when UMass lost the ball on downs at its own 17 with 22 seconds left.

The Vols finally broke a scoreless tie on Kelly's 12-yard touchdown run around the left end with 4:33 left in the half. The touchdown was set up by Dormady's 66-yard completion to Brandon Johnson, who had seven catches for 123 yards to set career highs in both categories.

UMass responded with Comis' 5-yard touchdown keeper around the left end, capping a series helped along by an unsportsmanlike conduct penalty on Jones that gave the Minutemen first-and-goal. Tennessee remained ahead 7-6 only because Michael Schreiner missed the ensuing extra-point attempt.

Tennessee extended the lead to 14-6 when Dormady found Tyler Byrd alone in the back left corner of the end zone for an 8-yard touchdown with 25 seconds left until halftime. Aaron Medley added a 40-yard field goal midway through the third quarter.

UMass cut the lead to 17-13 late in the third period on Ford's 13-yard pass to Sadiq Palmer.

UMass: Kicking woes and poor pass protection have hurt UMass all season, and the pattern continued on Saturday. Schreiner has missed all three of his field-goal attempts this season and failed to deliver on a potential game-tying extra point attempt in the second quarter. Logan Laurent replaced Schreiner and made UMass' second extra-point try. UMass had allowed a Football Bowl Subdivision-high 5.75 sacks per game before Saturday and have now increased that average to 6.0.

Tennessee: The Vols must sort out their quarterback situation after neither Dormady nor Guarantano could move the ball consistently on Saturday. Dormady was 17 of 27 for 187 yards with a touchdown pass and fumble. Guarantano was 2 of 5 for minus-3 yards and had three carries for 4 yards. First-half unsportsmanlike conduct penalties on Jones and defensive tackle Kendal Vickers show the Vols also need more poise as they prepare to resume Southeastern Conference competition.