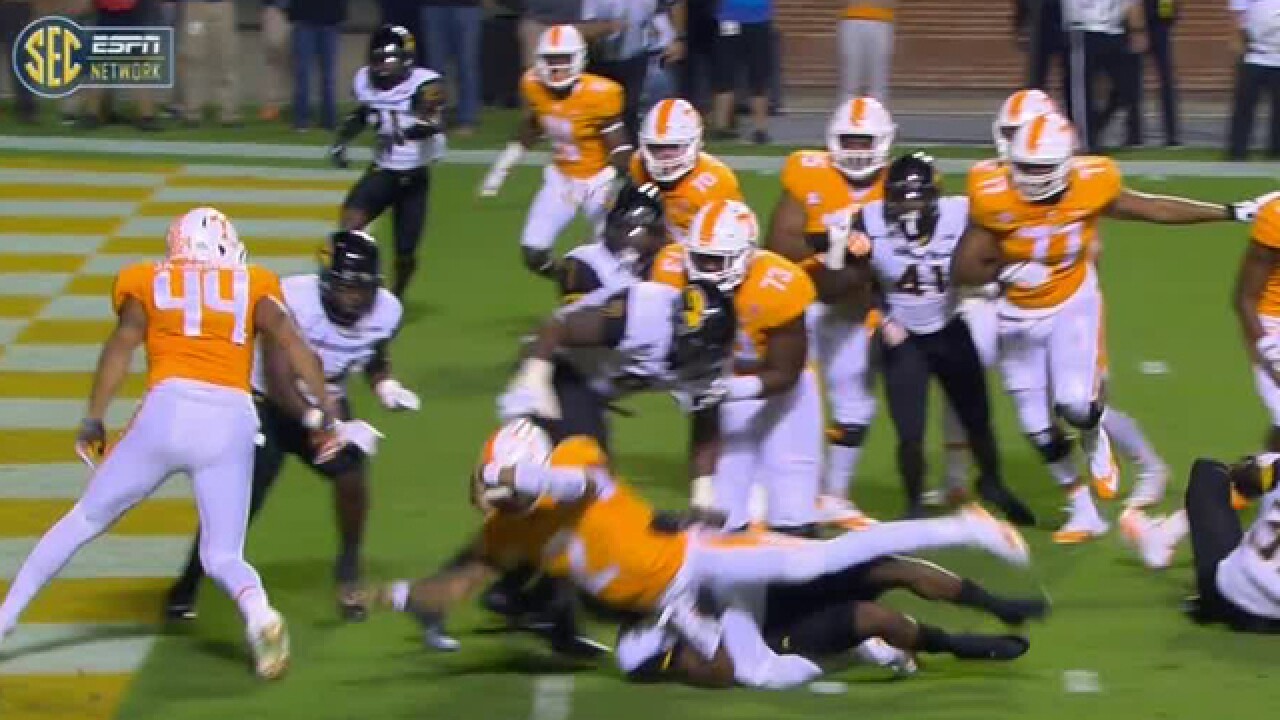 John Kelly ran for two touchdowns and 79 yards Saturday as Tennessee withstood an injury to starting quarterback Jarrett Guarantano in a 24-10 victory over Southern Mississippi that snapped the Volunteers' four-game losing streak.

Tennessee (4-5) avoided its first five-game skid since 1988, when the Vols dropped their first six games of the season.

The victory proved costly. Guarantano's injury resulted in the college debut of freshman Will McBride, who had been on track to redshirt this season.

Guarantano left the game for three plays in the second quarter after getting hurt. He then sat out the entire second half.

McBride went 1 of 8 for just 13 yards but avoided mistakes as Tennessee didn't commit a single turnover. Guarantano was 9 of 13 for 102 yards.

Guarantano opened the scoring with a 3-yard keeper to cap the game's first series. Tennessee's defense made sure the lead stood by forcing two third-quarter turnovers that resulted in Kelly's touchdowns.

Emmanuel Moseley's 19-yard interception return led to Kelly's 20-yard touchdown run that extended the Vols' lead to 17-3 with 5:15 left in the third.

On the Golden Eagles' next series, Tennessee's Darrell Taylor sacked Keon Howard and forced a fumble that Rashaan Gaulden recovered at Southern Mississippi's 19. Tennessee initially settled for a 30-yard field goal on its ensuing series, but a Southern Mississippi (5-4) personal foul kept the drive alive and eventually led to a Kelly 3-yard touchdown run.

Southern Mississippi's only points came on Parker Shaunfield's 27-yard field goal in the second quarter and Kwadra Griggs' 1-yard keeper with 6:45 left in the game. Griggs took over in the fourth quarter for Howard, who went 7 of 22 for 100 yards and had 10 carries for 29 yards.

Tennessee's defense needed to step up its play because its injury-riddled offense continued to struggle.

On the offensive line, tackles Brett Kendrick, Drew Richmond and Marcus Tatum were all sidelined. The Vols' sixth different starting line combination of the season had Trey Smith, Jashon Robertson, Coleman Thomas, Ryan Johnson and Devante Brooks lining up from left to right.

The Vols burned the redshirt of freshman offensive lineman Riley Locklear, who made an appearance in the first quarter when an injury briefly sidelined Brooks.

Tennessee's injury list has grown so long that even kicker Brent Cimaglia was unable to play Saturday. Aaron Medley handled the kicking duties Saturday and made all his extra-point attempts plus a 38-yard field goal.

Tennessee: Give credit to the defense for forcing turnovers to create scoring opportunities on a night when the offense couldn't move the ball. That defense was playing without starting end Jonathan Kongbo, who was suspended for a violation of team rules. Tennessee still hasn't thrown a touchdown pass in its last 22 quarters.