Vols continue home mastery of No. 12 Kentucky with 24-7 win 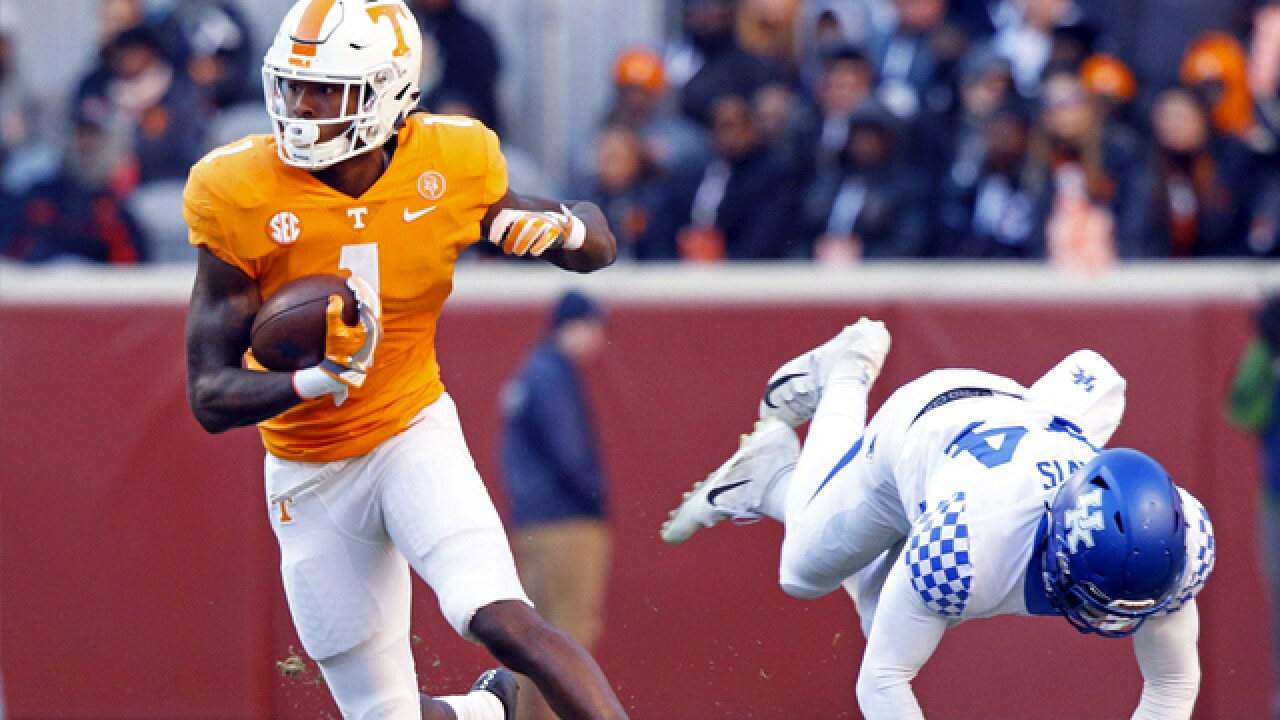 Jarrett Guarantano threw a 39-yard touchdown pass to Marquez Callaway on the final play of the first half and Darrell Taylor recorded four sacks as Tennessee trounced No. 12 Kentucky 24-7 on Saturday.

Tennessee has won 32 of the last 34 overall meetings, though the Wildcats won last year’s game 29-26 at Kentucky.

“One thing we want to do here in the future as a program, is we want to be able to finish a season and play our best ball at the end,” Tennesse coach Jeremy Pruitt said. “We’re 2-0 in November. That’s a good thing.”

The Volunteers broke the game open by scoring two touchdowns in the last three minutes of the second quarter.

After Tim Jordan’s 3-yard TD run gave Tennessee a 10-0 lead with 2:56 left before halftime, the Vols forced a punt and got the ball back at their own 28-yard line with a minute remaining.

Tennessee initially appeared intent on running out the clock, but the Vols called a timeout after Ty Chandler’s 14-yard carry with 13 seconds left. Guarantano threw a 17-yard completion to Callaway that put Tennessee on Kentucky’s 39 with 6 seconds remaining.

Rather than trying a short, quick pass to set up a long field-goal attempt, Guarantano threw deep. Callaway was at the front of a crowd in the right side of the end zone when he snared the ball to give Tennessee a 17-0 halftime advantage.

“We were a little bit out of field-goal range, so we took a shot in the end zone,” Pruitt said. “I thought Jarrett did a good job evading a little bit of rush there, stepped up in the pocket and made a good throw to give us a chance, and Marquez went up and got it.”

Guarantano ended up 12 of 20 for 197 yards, including a 2-yard touchdown pass to Dominick Wood-Anderson that extended Tennessee’s advantage to 24-0 in the third quarter. That lead proved insurmountable against a dispirited Kentucky squad.

Kentucky’s hopes for its first SEC championship game appearance had disappeared with a 34-17 loss to No. 5 Georgia (No. 5 CFP) last week, but the Wildcats still were in position for a potential New Year’s Six bowl appearance if they had won their final three-regular season games.

The Wildcats instead came out flat and now likely must settle for a less prestigious bowl. Tennessee is one victory away from bowl eligibility in coach Jeremy Pruitt’s debut season after going winless in SEC competition last year.

“Not a really good effort,” Kentucky coach Mark Stoops said. “It really starts with me. I didn’t have the team prepared. Not a good enough job by myself. I have to accept that responsibility. We’ve got to get back to work and do some things differently.”

Kentucky’s only points came on Terry Wilson’s 19-yard touchdown pass to C.J. Conrad with 1:56 left in the third quarter. Chance Poore missed a 51-yard field-goal attempt in the second quarter and had a 30-yarder blocked by Shy Tuttle in the fourth.

Kentucky: The Wildcats have relied on Snell’s running ability and their defense’s tenacity all year, but it appears both are wearing down late in the season. Snell, who entered Saturday as the SEC rushing leader, ran for 81 yards on 20 carries but was held below 100 yards rushing for a third straight game. He also had six catches for 25 yards. Kentucky headed into the Georgia game having not allowed any opponents to exceed 20 points all season. Now the Wildcats have given up at least 24 points in back-to-back weeks.

Tennessee: The return of safety Micah Abernathy and running back Ty Chandler made quite a difference for the Vols. Abernathy returned after missing four games with an ankle injury and helped boost Tennessee’s rapidly improving defense. Nagging injuries limited Chandler to two carries last week, but he ran 16 times for 89 yards Saturday and rejuvenated Tennessee’s rushing attack. After running for just 20 yards on 26 carries in a 14-3 victory over Charlotte last week, Tennessee rushed 40 times for 215 yards against Kentucky.