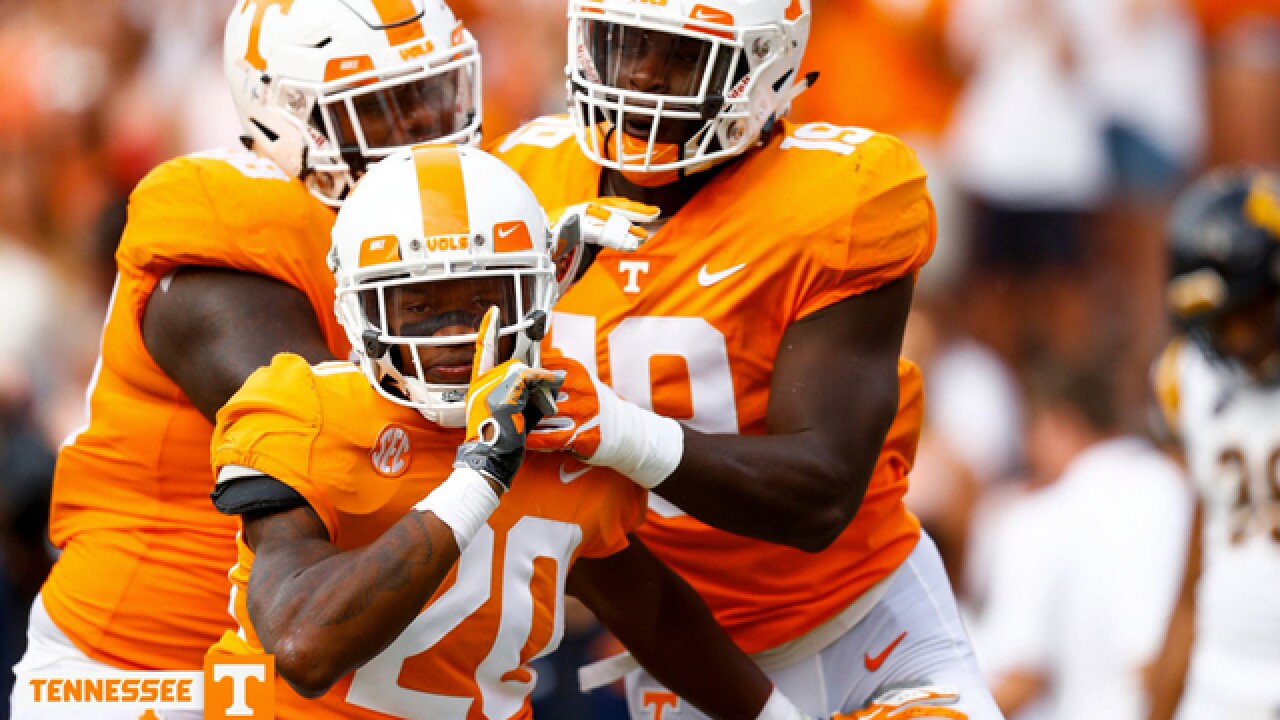 Marquill Osborne scored on a blocked punt return and Darrin Kirkland Jr. scored on an interception return as Tennessee's Jeremy Pruitt earned his first head coaching victory in his home debut. The Volunteers had lost 40-14 to No. 14 West Virginia in Pruitt's opening game last week at Charlotte, North Carolina.

The Vols (1-1) put the game away by collecting 28 points in a stretch of under 6 1/2 minutes shortly after the threat of lightning caused a 48-minute delay. Tennessee scored three touchdowns in a span of 1 minute, 46 seconds.

Tennessee led 10-0 but had struggled on offense until play was halted with 12:01 left in the half. On Tennessee's first series after the delay, Jarrett Guarantano's 51-yard completion to Marquez Callaway set up a 1-yard touchdown run from Banks with 9:27 remaining until halftime.

ETSU quarterback Logan Marchi's pass on the next play from scrimmage was tipped by receiver Quan Harrison and picked off by Bryce Thompson, whose 21-yard interception return put Tennessee at the Bucs' 3-yard line. Banks ran through the right side of the line into the end zone on first-and-goal.

Marchi's next pass was deflected at the line of scrimmage and caught by Kirkland, whose 33-yard interception return extended Tennessee's lead to 31-0 with 7:41 left in the half. After Tennessee forced an ETSU punt, Josh Palmer scored on a 20-yard run to make it 38-0 with three minutes remaining in the second quarter.

ETSU (1-1) received $500,000 to make the trip to Knoxville and face a Football Bowl Subdivision team for the first time since relaunching its program in 2015. The Buccaneers had stopped playing football in 2003 for financial reasons before bringing the sport back.

ETSU: Saturday's game had an announced attendance of 96,464. ETSU's average home attendance last year was 8,008. So it shouldn't have come as much of a surprise that the stage often seemed a little too big for the Buccaneers. ETSU's defense actually played quite well in the first quarter, but the Bucs' breakdowns on offense and special teams enabled Tennessee to put this game out of reach early.

Tennessee: The Vols faced a weather-related delay for the second straight game but responded much better this week. Last week, Tennessee only trailed West Virginia 13-7 at halftime when the threat of lightning caused a one-hour delay. The Vols were outscored 27-7 in the second half of that game.

ETSU is at Virginia Military Institute on Saturday.