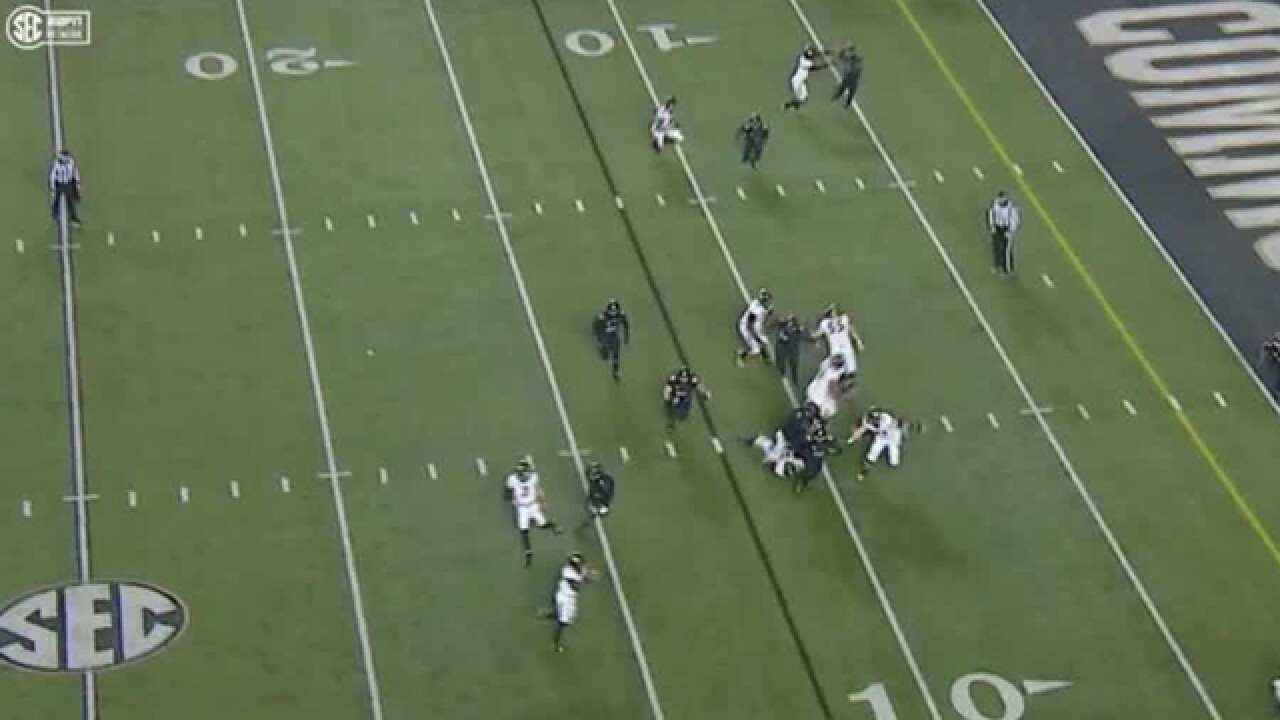 The Tigers (6-5, 3-4 SEC) are the second team from the Southeastern Conference to become bowl eligible after a 1-5 start.

Mississippi was the first, finishing 6-6 after an Independence Bowl loss in 1983.

Missouri is the 13th FBS team and sixth from the Power 5 conference to earn bowl eligibility after losing five of its first six games.

The Tigers became the first FBS team since 1976 to have both a five-game win streak and a five-game losing streak in the same season.

Representatives from the Liberty and TaxSlayer bowls attended the game.

Tigers sophomore Rashaud Floyd scored twice during a 1:45 span in the second quarter on a 30-yard pass from Lock and a 74-yard punt return.

Ish Witter, who posted a career high in rushing yards in last week's win over Tennessee, enjoyed another productive outing with 102 yards.

Missouri led 7-0 after the first quarter before erupting for four straight touchdowns to take a commanding 35-0 halftime lead.

Vanderbilt's Ralph Webb rushed for 55 yards and one TD, making him the ninth player in SEC history to pass the 4,000-career yard milestone.

The Commodores (4-7, 0-7) finally showed some life in the second half, outscoring the Tigers 17-3 in the third quarter.

Missouri scored on the game's first possession when Lock threw a 7-yard TD pass to Albert Okwuegbunam, giving the Tigers a 7-0 lead.

Vanderbilt's defense tightened for the rest of the quarter, but Larry Rountree's 12-yard rushing TD, Brandon Lee's 42-yard interception for a TD, Floyd's TD reception from Lock and his punt return gave the Tigers a big lead.

Vanderbilt rallied with Webb's 1-yard TD run, 7-yard TD pass from Shurmur to Caleb Scott and Tommy Openshaw's 23-yard field goal to narrow the deficit to 38-17 in the third quarter.

Missouri is averaging 52 points during its win streak. Missouri coach Barry Odom earned a minimum $50,000 bonus for getting a bowl game. He will earn $15,000 more with a spot in a New Year's six bowl game.

Vanderbilt got outplayed on both sides of the ball, remaining winless in the SEC. Vanderbilt suffered its seventh loss in eight games, dropping coach Derek Mason's career record in the SEC to 5-26.

Missouri closes its regular season at Arkansas on Friday. The Tigers scored 21 unanswered points in second half of last year's 28-24 win over the Razorbacks.

Vanderbilt visits Tennessee in its regular-season finale on Saturday. The Commodores have won three of the last five games in this series after losing 28 of the previous 29.