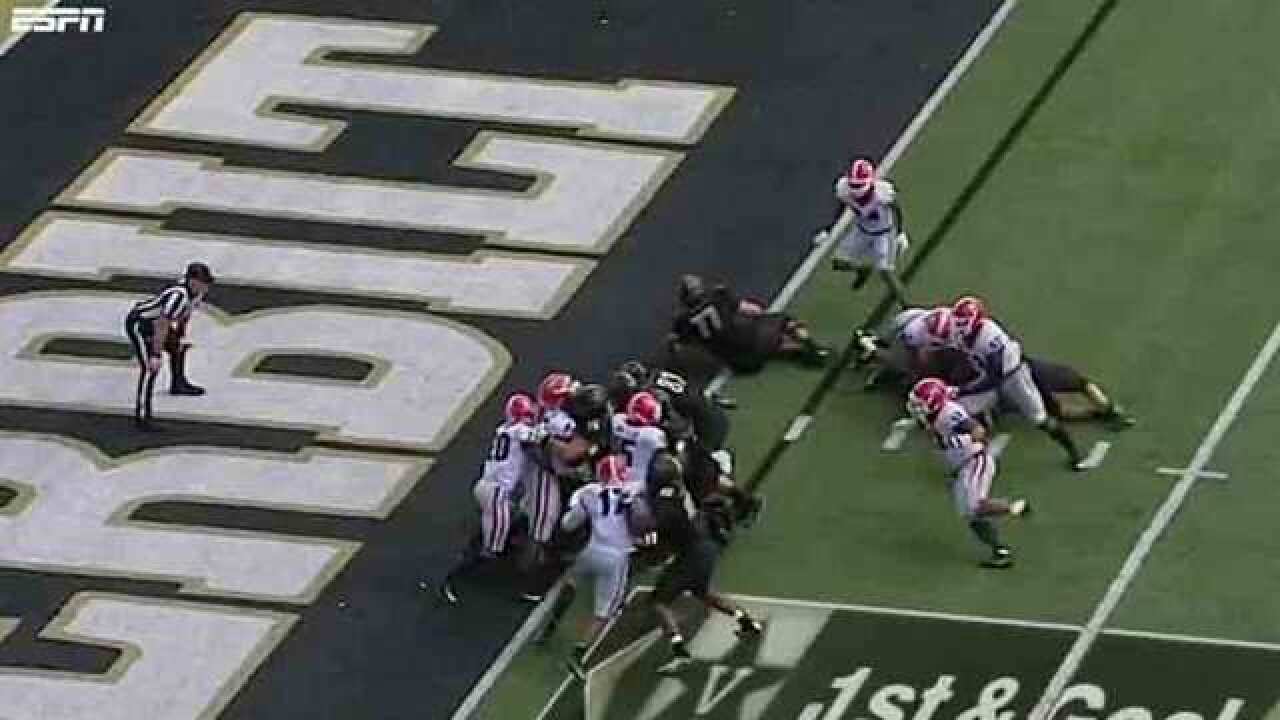 Georgia (6-0, 3-0 Southeastern Conference) continued its best start since 2012 when the Bulldogs reached the SEC championship. The Bulldogs also avenged a 17-16 loss to Vanderbilt last year by beating the Commodores for the 20th time in the past 23 games in this series.

Georgia ran through and over Vanderbilt, piling up 423 yards. Sony Michel added 150 yards and a TD, while Elijah Holyfield scored his first career TD on a 15-yard run.

Vanderbilt (3-3, 0-3) lost its third straight to wrap up the toughest four-game stretch in school history against the Commodores' fourth consecutive ranked opponent.

Injuries kept linebacker Reggie Carter and tackle Trenton Thompson at home for a Georgia defense that came in second in the nation giving up just 9.2 points a game. Starting linebacker Natrez Patrick stayed home after being arrested Thursday night on charges including possession of less than one ounce of marijuana. Carter is Patrick's backup, so Juwan Taylor started for Patrick.

Coach Kirby Smart started freshman Jake Fromm again at quarterback, then the Bulldogs stuck to the ground. Chubb finished off the opening drive with a 33-yard run that put Georgia ahead to stay. Fromm also tossed a 5-yard TD pass to D'Andre Swift in the second quarter, and Chubb added a 14-yard run late in the first half for a 21-0 lead.

The Bulldogs stretched their scoreless streak to seven quarters and nearly had an eighth before Vanderbilt went 75 yards, with Ralph Webb capping the drive with a 1-yard TD run just before halftime. Those were the first points allowed by Georgia since a field goal by Mississippi State on Sept. 23.

Fromm padded the lead to open the third quarter with his second TD pass, a perfectly thrown 47-yarder to Terry Godwin for a 28-6 lead.

Georgia: The way the Bulldogs run the ball with Chubb and Michel, they don't need much from their quarterbacks. Fromm still proved very efficient, going 7 of 11 for 102 yards passing. Jacob Eason didn't replace Fromm until 10:15 left in the fourth quarter and was immediately sacked and stripped of the ball to set up Vandy's second TD.

Vanderbilt: The Commodores now have given up the two largest rushing performances this season. They allowed a league-worst 496 yards rushing in a 59-0 loss to No. 1 Alabama on Sept. 23 . At least their run game showed signs of life with Webb ripping off a 28-yard run that was his longest this season in the first quarter.

The Bulldogs certainly avoided any letdown after their 41-0 rout of Tennessee last week with the kind of dominant performance that could move them up another notch.