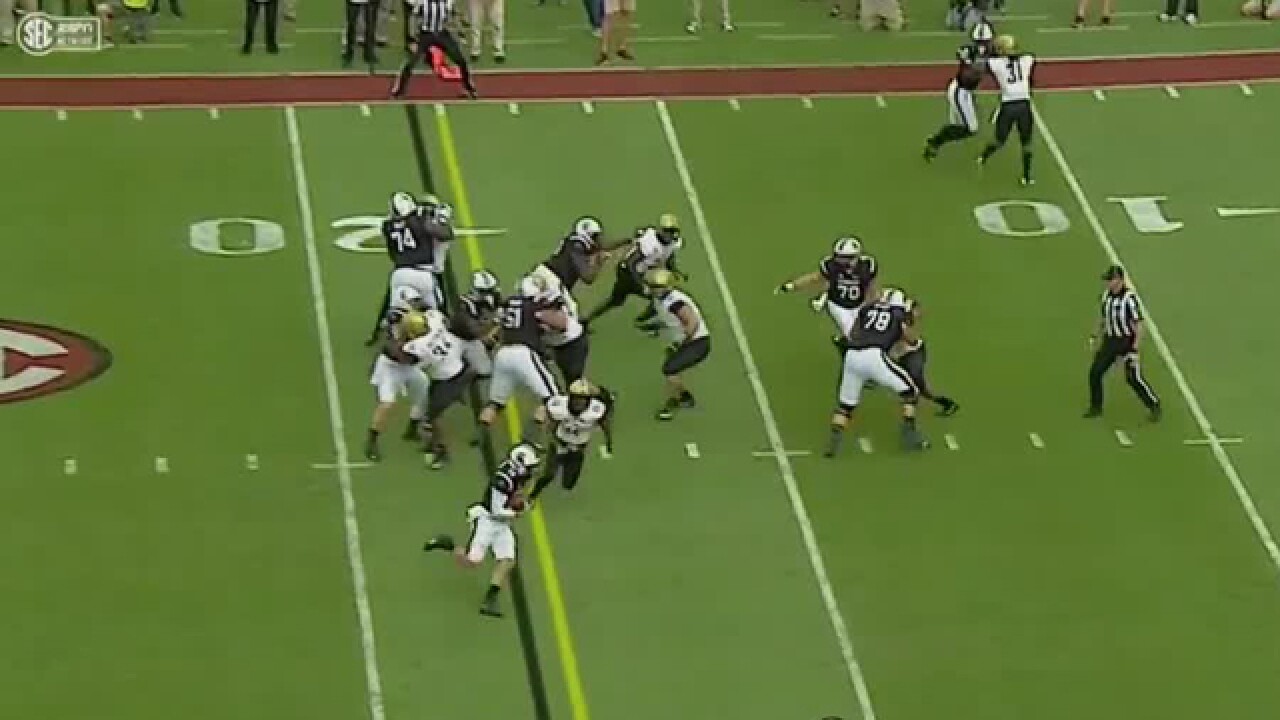 Jake Bentley ran for two touchdowns and threw for another to lead South Carolina to a 34-27 win over Vanderbilt on Saturday that assured the Southeastern Conference's East Division race would go on at least one more week.

Vanderbilt (3-5, 0-5) had two players ejected for targeting and 10 penalties for 100 yards. The final one might have been the most costly. A holding penalty by tight end Sam Dobbs stalled a potential game-tying drive and Kyle Shurmur overthrew Caleb Scott on fourth-and-2 with just over a minute to go.

Shurmur threw for a season-best 333 yards and four touchdowns.

A.J. Turner ran 15 times for 121 yards and was the first Gamecock 100-yard rusher this season.

South Carolina kept itself in the SEC East race with the win. If the Gamecocks beat No.2 Georgia next week, they will be only one game behind the Bulldogs and own the tiebreaker.

Vanderbilt: The Commodores assured themselves of their 23rd losing record in the SEC in the 26 seasons since the league split into divisions in 1992 ... The players ejected for targeting were Vanderbilt's leader in sacks, linebacker Charles Wright, and defensive back Zaire Jones ... Vanderbilt has allowed 10 points or more in 12 of 18 quarters in the SEC this season.

South Carolina: The Gamecocks have only lost to Vanderbilt twice this century, in 2007 and 2008. The Gamecocks lead the series 22-4 since joining the SEC ... Parker White made 2 of 3 field goals ... The Gamecocks are now bowl-eligible for the second year in a row ... South Carolina is assured of not having a losing season in the SEC for the first time since ending a run of three straight 6-2 SEC seasons in 2013.

Vanderbilt: The Commodores get to finally go outside the SEC again, hosting Western Kentucky.