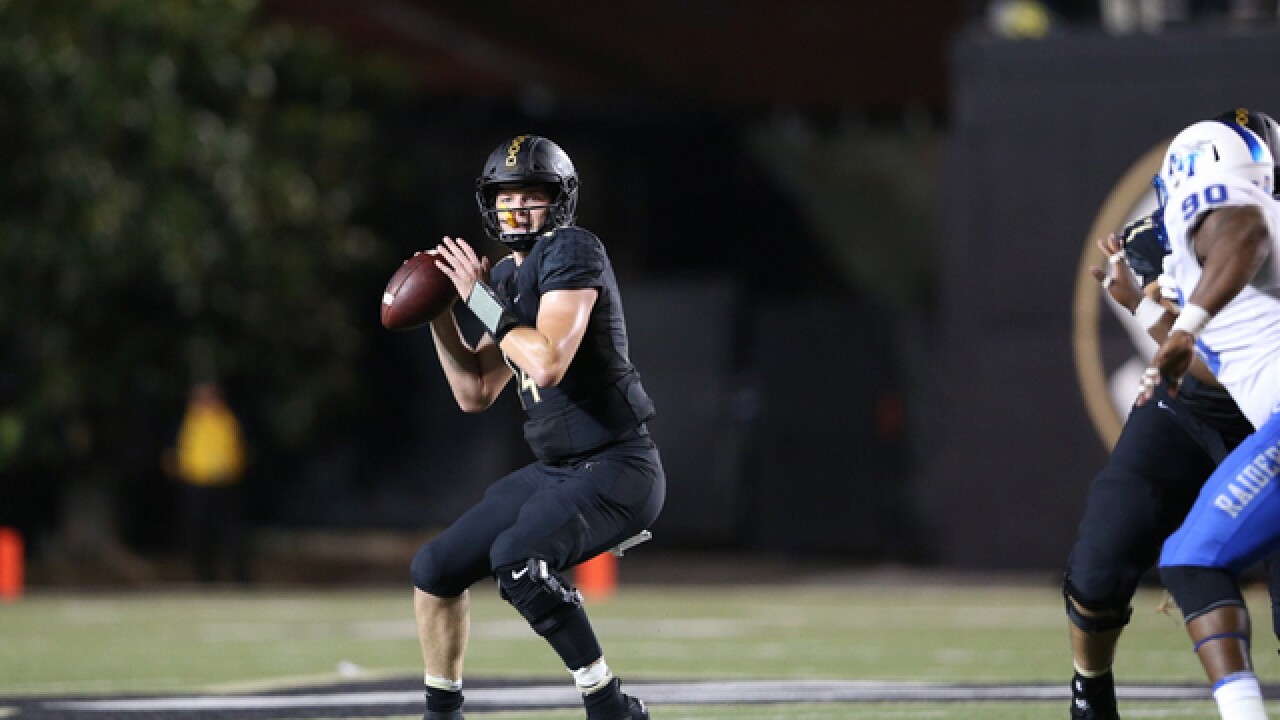 Kyle Shurmur threw for 170 yards and two touchdowns as Vanderbilt routed Middle Tennessee 35-7 Saturday night in the season opener for both teams.

Dayo Odeyingbo returned a fumble 3 yards for a TD, and Khari Blasingame also ran for a score as the Commodores won their second straight opener at Middle Tennessee's expense. They also wrapped a four-game contract with their fourth straight victory against the Conference USA school less than 40 miles away.

The Commodores had six sacks and forced two turnovers.
With a pair of senior quarterbacks starting, this was expected to be a showdown through the air. Vanderbilt stuck to the ground on its opening touchdown drive, and Shurmur had just 28 yards passing in the first half compared to Brent Stockstill who hit 10 of his first 12 passes for 100 yards in the first quarter alone.

Stockstill had only 78 yards passing in the second half.

Shurmur put Vanderbilt up 21-7 midway through the third quarter with a 17-yard TD pass to Chris Pierce on his first career reception. Shurmur set up the TD with a perfect 49-yard pass to Donaven Tennyson two plays earlier, and he hit Kalija Lipscomb on a 28-yarder in the fourth quarter for a 28-7 lead.

Vanderbilt led 7-0 in the first quarter when the Commodores lost one of its best defenders and its second safety for the game. Review showed LaDarius Wiley lowered his helmet and popped off Middle Tennessee running back Tavares Thomas' helmet at the end of a run. Wiley was ejected, with Zaire Jones already suspended over an arrest Aug. 23 .

The penalty kept Middle Tennessee's drive alive, and Stockstill finished off a 93-yard drive with a 4-yard TD pass to C.J. Windham tying it at 7-7 late in the first quarter.

Middle Tennessee: The Blue Raiders showed they could slow down a Southeastern Conference team for at least a half, holding Vanderbilt to 89 yards after giving up 58 on the opening drive. That could help with trips to two more SEC schools this season: No. 3 Georgia on Sept. 15 and then Kentucky on Nov. 17.

Vanderbilt: Coach Derek Mason hired his first defensive coordinator since his first season here, and the addition of Jason Tarver paid off pretty quickly. Odeyingbo picked up a fumble off a Stockstill lateral and scored the Commodores' first TD off a fumble recovery since 2016 against Kentucky. The Commodores also had five sacks by halftime, matching what they got against the Blue Raiders a year ago in their opener.