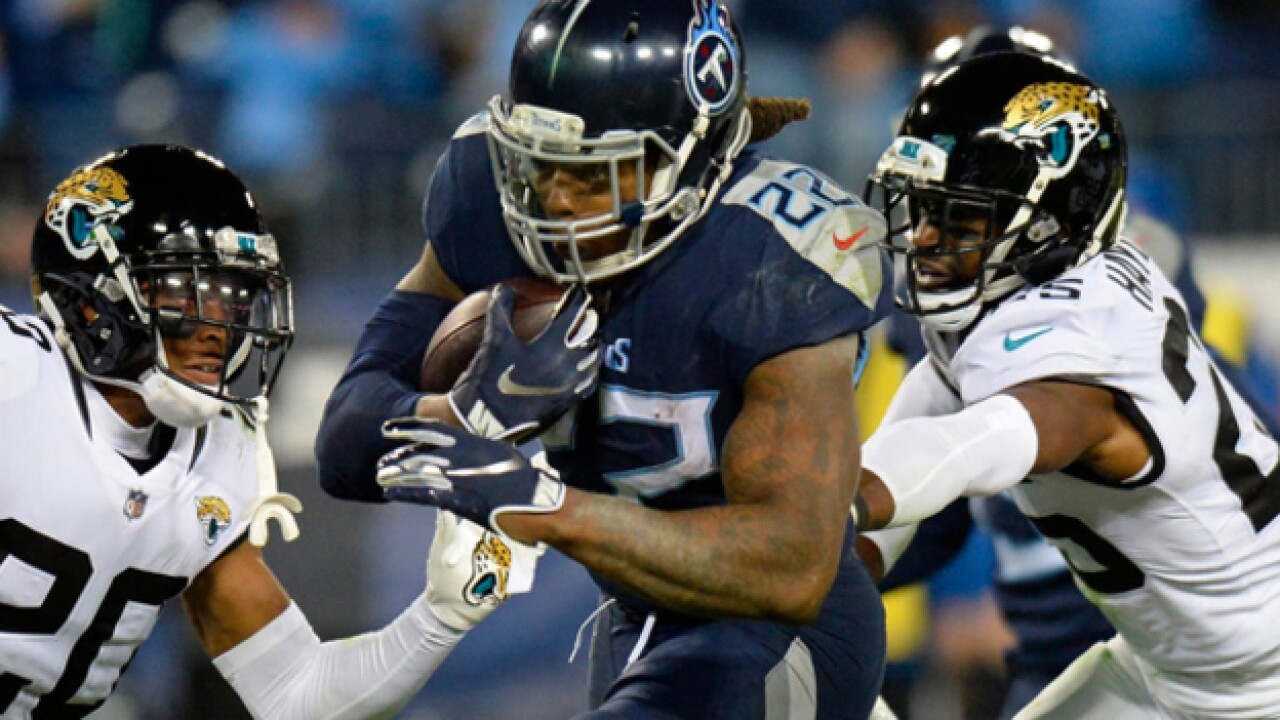 In a rivalry known for its physicality, the Titans put the ball in the hands of 6’3, 247-pound running back Derrick Henry and the Jacksonville native ran all over his hometown team in a 30-9 beatdown that kept Tennessee’s playoff hopes alive.

Henry looked like the guy that won the Heisman Trophy at Alabama, setting a career-high and Titans franchise record with 238 yards on 17 carries to go along with four touchdowns in the romp.

This was supposed to be the season Henry took over as the Titans’ featured back. But through 12 weeks he had rushed for just 474 yards and never more than 58 in a game.

He had been replaced by Dion Lewis and even shopped around prior to the trade deadline. But the 2016 second round pick had run harder in recent weeks, earning praise from his coaches, and facing one of the league’s best rushing defenses Thursday they turned him loose.

Henry’s first carry of the game went for 14 yards on an impressive 10-play, 73-yard opening drive that ended on a three-yard Henry touchdown plunge.

After Cameron Batson’s total misplay of a punt resulted in a safety, the Jaguars took advantage of the short field by driving inside the five yard line. The Titans defense stood tall, however, stopping them from scoring despite having six snaps inside the five.

It was Henry’s former Alabama teammate Rashaan Evans that made the play on fourth down. The first round pick bursting through the line to bring down Leonard Fournette and swing the momentum.

The tide (pun intended) turned for good on the very next play when Henry bounced a run off of left tackle, broke free and then sprinted 99 yards to the end zone, discarding A.J. Bouye and linebacker Leon Jacobs with vicious stiff arms in the process. The run tied Tony Dorsett’s NFL record for longest run from scrimmage and gave the Titans a 13-2 lead.

That would be more than enough on a night the defense limited the Jaguars to 98 total yards in the first half and came up with four sacks while harassing Cody Kessler all night. Jurrell Casey’s second sack of the night resulted in a fumble that the Titans recovered.

That set up another magical Henry moment on the very next play as he turned the corner, this time on the right side, and outran everybody for a 54-yard score. It was his fourth touchdown of the night and moved him into striking distance of Chris Johnson’s single-game rushing record which he was able to break in the fourth quarter.

He left the game to chants of “Hen-ry, Hen-ry”, reminiscent of some of the great Eddie George salutes in this stadium’s history.

It was an all-time great individual performance on a night when the Titans delivered one of their best performances, responding from the adversity of two straight losses with two wins in the span of 100 hours.

This one was extra special because it came against a Jacksonville team that denied them a playoff berth two years ago and edged them out for the division crown last season. But the Jags are done this year, now 4-9 and quickly moving towards the offseason.

The Titans, on the other hand, are still alive, now just a half game back of the Ravens for the AFC’s final wild card spot with three games left.

There’s still a long ways to go, but the Titans looked like a playoff team Thursday night. And Henry finally looked like the type of player this team can lean on down the stretch.