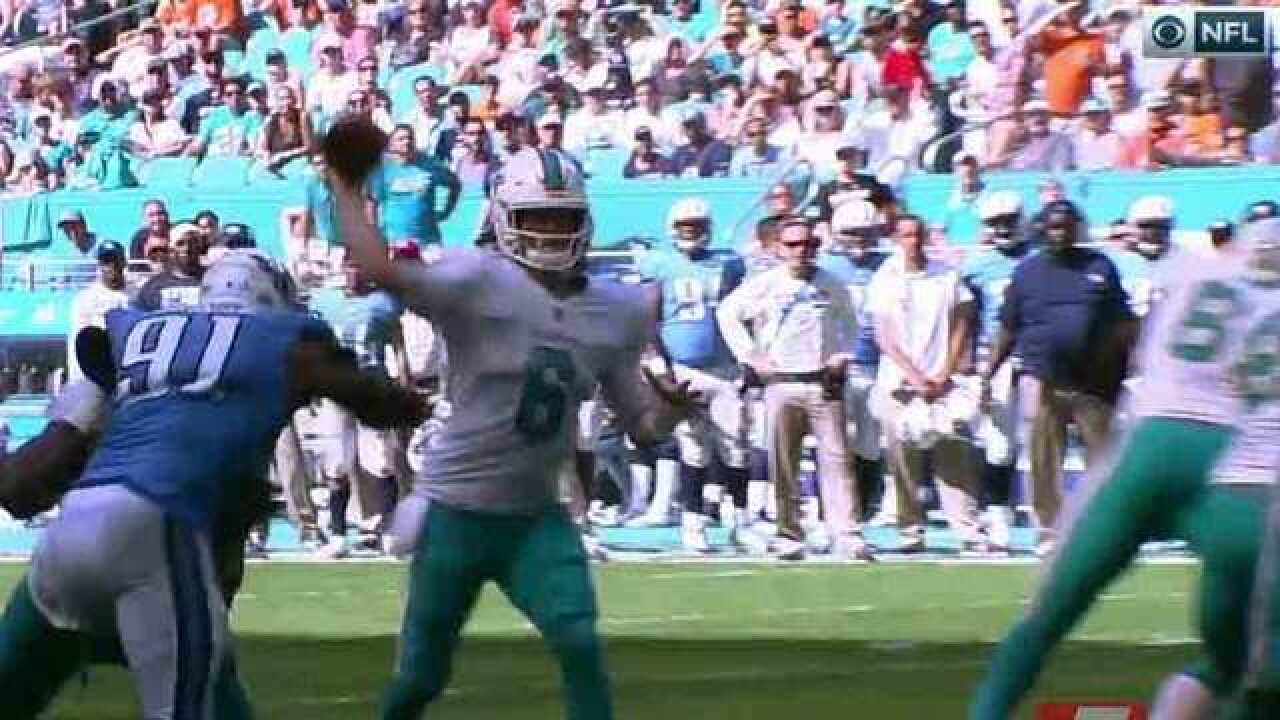 Jay Cutler finally silenced the boobirds with a fourth-quarter touchdown pass, and the Miami Dolphins overcame another dismal offensive showing Sunday to beat the Tennessee Titans 16-10.

The jeers started in the first quarter of the Dolphins' home debut, and soon the crowd was chanting for backup quarterback Matt Moore. But coach Adam Gase stuck with Cutler, who capped a 58-yard drive with a 6-yard touchdown pass to Jarvis Landry for the tiebreaking score.

The Titans played without quarterback Marcus Mariota, who was inactive because of a left hamstring injury suffered a week ago. Replacement Matt Cassel went 21 for 32 for 141 yards and was sacked six times.

Miami came in ranked last in the NFL in points and yards per game, and struggled against a Titans team that allowed 57 points against Houston a week ago.

Miami's only TD in the first three periods was scored by safety Reshad Jones on a 38-yard fumble return when the other players on both teams apparently thought the play had ended with an incomplete pass. The Titans didn't chase Jones, and the officials didn't initially signal a score.

The Dolphins won despite totaling just 178 yards. They tried the wildcat in the second quarter, and even that flopped -- tight end MarQueis Gray took the snap, faked a handoff and threw incomplete.

The Titans couldn't get out of their own way, either. A 59-yard touchdown reception by Delanie Walker was negated by a pass interference penalty on Jonnu Smith.

Tennessee's DeMarco Murray managed only 58 yards rushing. Jones recovered Murray's fumble to set up an early Miami field goal, and a fumble by Jay Ajayi led to the Titans' first score on a field goal.

Cassel's best moment came when he drove the Titans 69 yards for a tying touchdown to start the second half. Backup tight end Phillip Supernaw caught an 11-yard pass for his first career touchdown.

Jones kept playing after everyone else stopped to give the Dolphins their first touchdown.

Cassel fumbled with his arm cocked when hit by Kiko Alonso, and the ball squirted forward 14 yards. Jones scooped up the ball and ran uncontested to the end zone.

Referee Bill Vinovich eventually announced that the loose ball was a fumble and Miami had scored. Following a replay review, the call was upheld, giving the Dolphins a 10-0 lead.

Titans: LT Taylor Lewan hurt his knee in the first quarter, later returned but watched the second half from the sideline.

Dolphins: WR DeVante Parker left the game in the first quarter with an ankle injury and didn't return.

Dolphins: at Atlanta next Sunday.