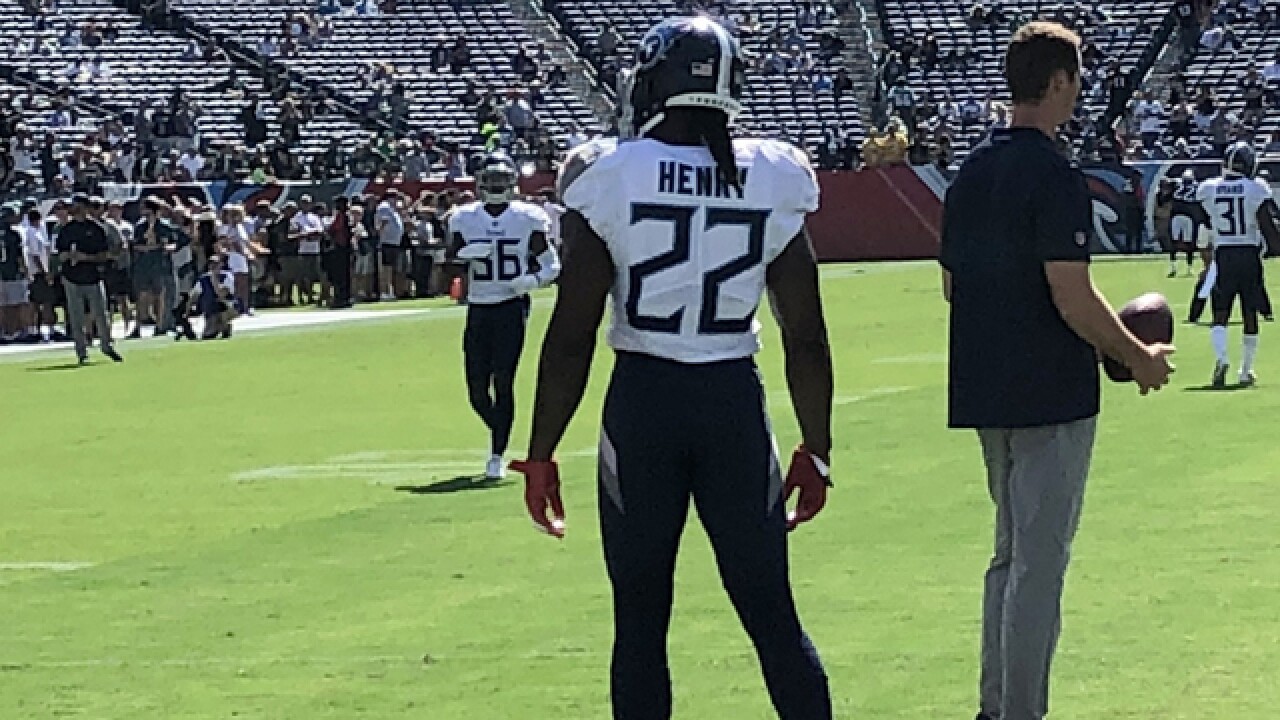 Marcus Mariota hit Corey Davis with a 10-yard touchdown pass just before the end of overtime, and the Tennessee Titans beat the Philadelphia Eagles 26-23 on Sunday for their best start since 2013.

The Titans trailed by 14 in the third quarter before rallying for the lead. They also trailed 23-20 in overtime before coming back again behind Mariota, who in his first start since being knocked out of the season opener with an injured elbow threw for 344 yards and two touchdowns while also running for a score.

On the game-winning drive, the Titans converted three fourth downs, one by penalty. Mariota hit Taywan Taylor with a 19-yarder on fourth-and-15, and Mariota found a wide-open Dion Lewis on fourth-and-2 for a 17-yard gain. Facing third-and-goal and the clock running out, Mariota found Davis for the receiver's first TD catch in the regular season.

The Titans (3-1) also came up with four sacks. Rookie Harold Landry got his first and also stripped Carson Wentz of the ball within the first minute of the fourth quarter, setting up the second of Ryan Succop's two field goals.

The Eagles (2-2) had their chances to win both at the end of regulation and in overtime but were forced to settle for a pair of field goals by Jake Elliott.

Philadelphia had three chances inside the Tennessee 20 to win in regulation after DeAndre Carter returned a punt 42 yards to the Titans 39 with 1:41 left, but Wentz threw incomplete on first and third down. Elliott kicked a 30-yarder to force overtime.

In the extra period, the Eagles had first-and-10 at the Tennessee 17 but had to settle for a 37-yard field goal by Elliott for the lead.

The Eagles led 10-3 at halftime and 17-3 after a masterful drive that ate up more than 7 minutes of the third quarter before Wentz hit receiver Alshon Jeffery with a 16-yard TD.

Mariota finally got the Titans' offense going after just two offensive touchdowns through the first three games. He capped a 75-yard drive with a 2-yard TD run to pull Tennessee within 17-10 late in the third, and he hit Tajae Sharpe with an 11-yard TD pass in the fourth quarter.

The Eagles outgained Tennessee 432-397 with Wentz throwing for 348 yards. Jeffery finished with 105 yards receiving and a TD, and Zach Ertz had 10 catches for 112 yards.

Davis finished with 161 yards on nine catches for the Titans.

Titans: Linebacker Wesley Woodyard, Tennessee's leading tackler, hurt his shoulder in the first quarter and did not return. Safety Kenny Vaccaro went to the locker room with trainers late in the first half with an injured right elbow and watched the second half with his arm in a sling on the sideline.