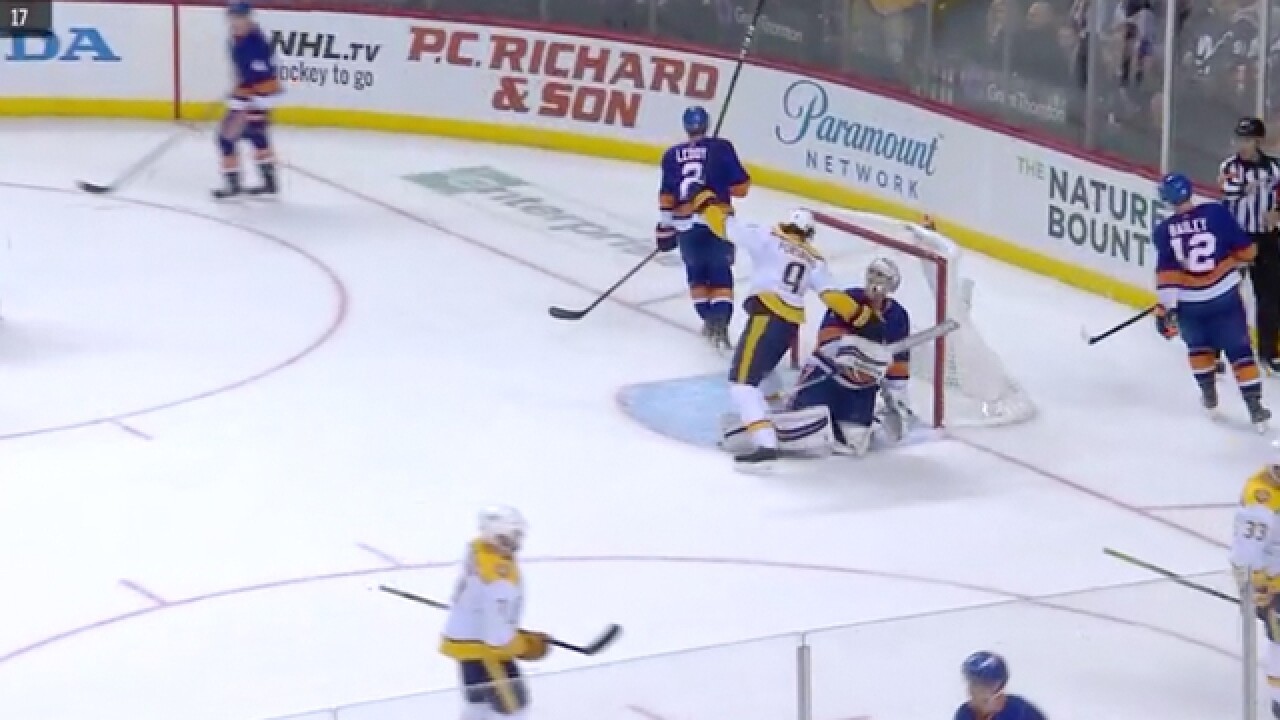 Viktor Arvidsson scored twice and the Nashville Predators held on for a 4-3 victory over the Islanders on Saturday night, spoiling New York's home opener.

Mathew Barzal had a goal and an assisst, and Valtteri Filppula and Anders Lee also scored for the Islanders, who were trying to get new coach Barry Trotz a win in his home debut. Josh Bailey had two assists and Thomas Greiss stopped 19 shots.

Trotz led Washington to the Stanley Cup championship in June before leaving in a contract dispute. He was then hired as coach of the Islanders to replace the fired Doug Weight after New York missed the playoffs for the eighth time in 11 seasons. The Islanders opened the season with a victory in Trotz's debut, 2-1 in overtime at Carolina on Thursday night.

New York, which outshot Nashville 22-11 over the final two periods, had several chances at the tying goal in the third but couldn't beat Saros.

Trailing 2-1 after one period, the Islanders tied it early in the second. Tanner Fritz deflected a shot by Filppula that bounced off both posts, and Filppula tapped it in from in front of the goal line on the right side at 2:46 for his second of the season.

However, Smith put the Predators up 3-2 as he got a pass from Kyle Turris and fired from between the circles off the post and in with 6 1/2 minutes left in the middle period.

Arvidsson got his second of the night with 3:18 to go as he fired it past Greiss from the right side to make it 4-2.

Lee, named the Islanders' 15th captain in franchise history earlier in the week to replace the departed John Tavares, pulled New York within one with 29 seconds remaining in the second. Bailey's pass deflected off Lee's skate and then Saros' pad before Lee knocked it in.

Arvidsson got the Predators on the scoreboard first as he passed the puck to himself between his skates while he got around defenseman Ryan Pulock, skated in and beat Greiss for his first 3:42 into the game.

New York then tied it on a goal awarded after a video review with just under 8 minutes left in the opening period. Josh Bailey stripped the puck from Subban behind the net, sent it out in front to Barzal at the right side and the reigning Calder Trophy winner as the league's top rookie put it between Saros' legs. The goalie appeared to smother the puck with his pads, but the review showed his pad was across the goal line.

Ekholm, who had two assists in the season-opening win at the New York Rangers on Thursday night, regained the lead for Nashville as he beat Greiss from the top of the left circle with 3:04 left.

NOTES: Turris has 11 assists and 15 points in 20 games against the Islanders. ... The Islanders and Predators conclude the two-gae season series Oct. 13 at Nashville. ... Islanders C Brock Nelson played in his 400th game. ... Lee now has three goals and eight points in nine career games against Nashville. ... Filppula, in his first season in New York and 14th in the NHL, has 10 goals and 27 points in 50 games against te Predators. ... Trotz was Nashville head coach for the franchise's first 15 seasons and holds the franchise records for games coached (1,196) and wins (557) -- putting him third all-time in NHL history in both categories with one franchise.

UP NEXT
Predators: Host Calgary in their home opener on Tuesday night.