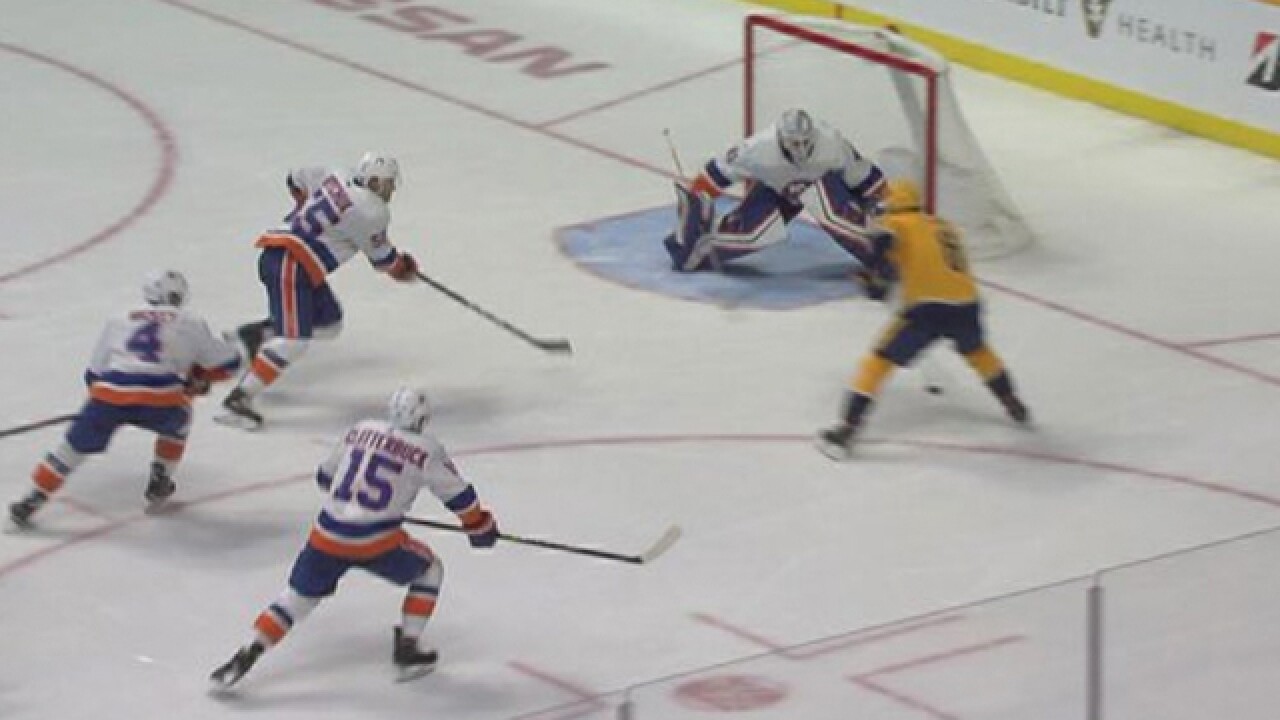 Copyright 2018 Scripps Media, Inc. All rights reserved. This material may not be published, broadcast, rewritten, or redistributed.
&lt;p&gt;Courtesy: nhl.com&lt;/p&gt;

Filip Forsberg scored twice, Viktor Arvidsson had a goal and an assist, and the Nashville Predators beat the New York Islanders 5-2 Saturday night.

Calle Jarnkrok and Kyle Turris also scored for Nashville, which has won four of its first five games. Juuse Saros stopped 20 shots to beat the Islanders for the second time in eight days.

The Predators jumped ahead with three goals in a 4 1/2-minute stretch late in first period while outshooting the islanders 16-4.

Jarnkrok got the game's first score with 4:35 left. Nick Bonino carried the puck along the right side and stickhandled along the goal line toward the New York net. The puck slipped off of his stick, but right to Jarnkrok in front, where he had an easy tap-in for his firstl of the season.

Forsberg doubled the Nashville lead 1:12 later. From the right faceoff dot, Ryan Johansen sent a pass to Forsberg in the low slot, where he beat Lehner high on the stick side.

Arvidsson made it 3-0 with 9.2 seconds remaining in the first. From the goal line to the right of the New York net, Johansen made a one-handed pass to Arvidsson in the right circle, where he beat Lehner with a one-timer high to the far side.

Nelson got New York on the scoreboard at 6:14 of the second. From the right boards, Anders Lee sent a pass to Nelson in the slot, where he beat Saros with a low wrist shot for his 100th career goal.

Ladd pulled the Islanders to 3-2 with just under 8 minutes left in the second as he took a pass from Mathew Barzal in the left circle and beat Saros with a wrist shot.

Forsberg added an empty-netter with 1 minute remaining to cap the scoring.

Islanders: At Anaheim on Wednesday night.