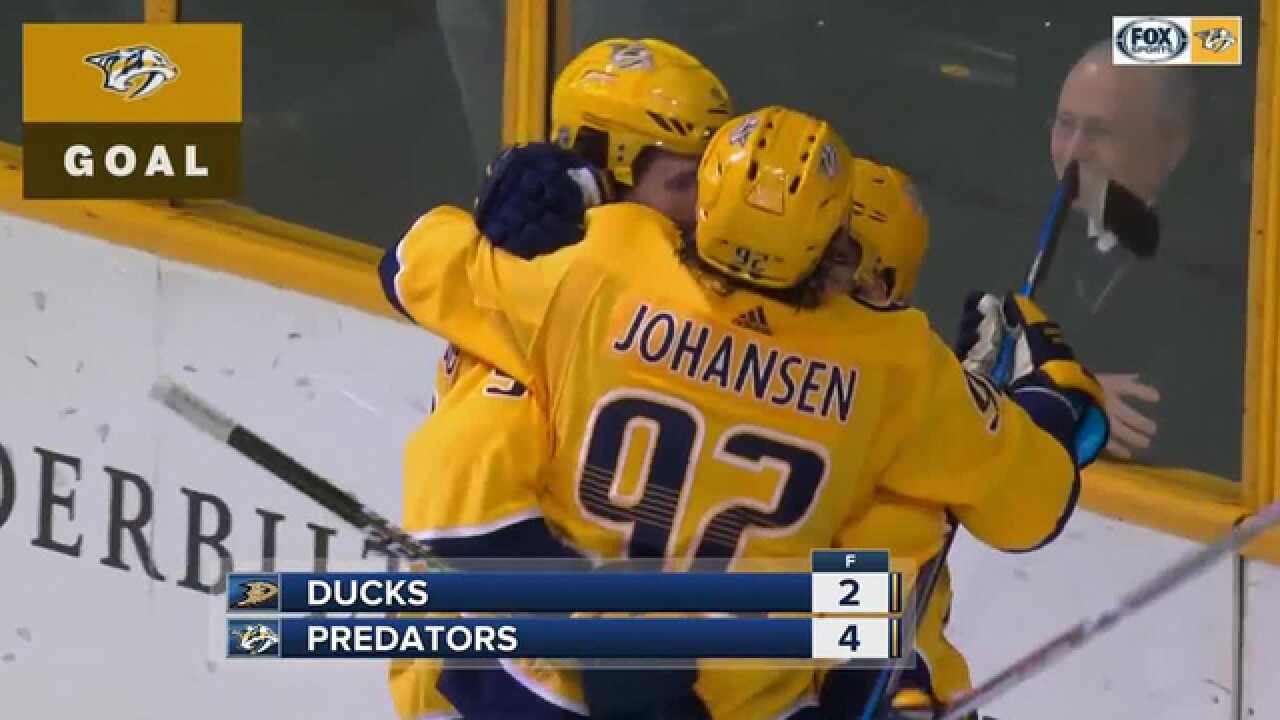 Austin Watson scored a short-handed goal late in the second period and the Nashville Predators beat the Anaheim Ducks 4-2 on Thursday night to extend their franchise-record winning streak to 10 games.

The Predators also matched Colorado for the longest winning streak in the NHL this season. The victory kept Nashville's edge at six points ahead of Winnipeg and Vegas for the Western Conference lead.

Rickard Rakell scored twice in the third period for the Ducks, who snapped a three-game winning streak. Rakell's second goal at 16:35 pulled the Ducks within 3-2 before Arvidsson scored over goalie John Gibson's glove with 1:46 left.

The Predators swept the three-game season series against the Ducks, the same team they beat for the Western Conference championship last year.

The puck didn't drop until after a pre-game ceremony for Poile, who got the record March 1 in Nashville's 4-2 victory at Edmonton. That win pushed him past Glen Sather (1,319). NHL Commissioner Gary Bettman was on hand for the festivities Thursday.

The Predators didn't miss a beat after the delay as Smith scored at 5:26 of the first period with a wrister that beat Gibson glove-side. Then Forsberg found Johansen at the edge of the crease with a pass, and Johansen redirected it for his 10th goal at 15:10.

The Ducks went on the power play late in the second period, and the Predators quickly turned that into a 3-0 lead. Colton Sissons skated up and took a shot, then Watson scored off the rebound with 1:18 left for his third short-handed goal this season -- tied for second in the NHL.

Anaheim opened the third taking the first few shots. Arvidsson hit a post for Nashville, then the Ducks came back the other way with Rakell scoring on a pass from Corey Perry at 6:04 of the period. Rakell made it 3-2 with his 30th goal of the season.

Notes: Nashville improved to 30-2-3 when leading after two periods. ... Smith has 21 goals this season, three away from matching his career best. ... Ryan Hartman has four points (two goals, two assists) in six games since Nashville picked up him in a trade from Chicago. ... Forsberg has five points (two goals, three assists) in his last five regular-season games against Anaheim. ... Rakell has a five-game point streak (seven goals and two assists).