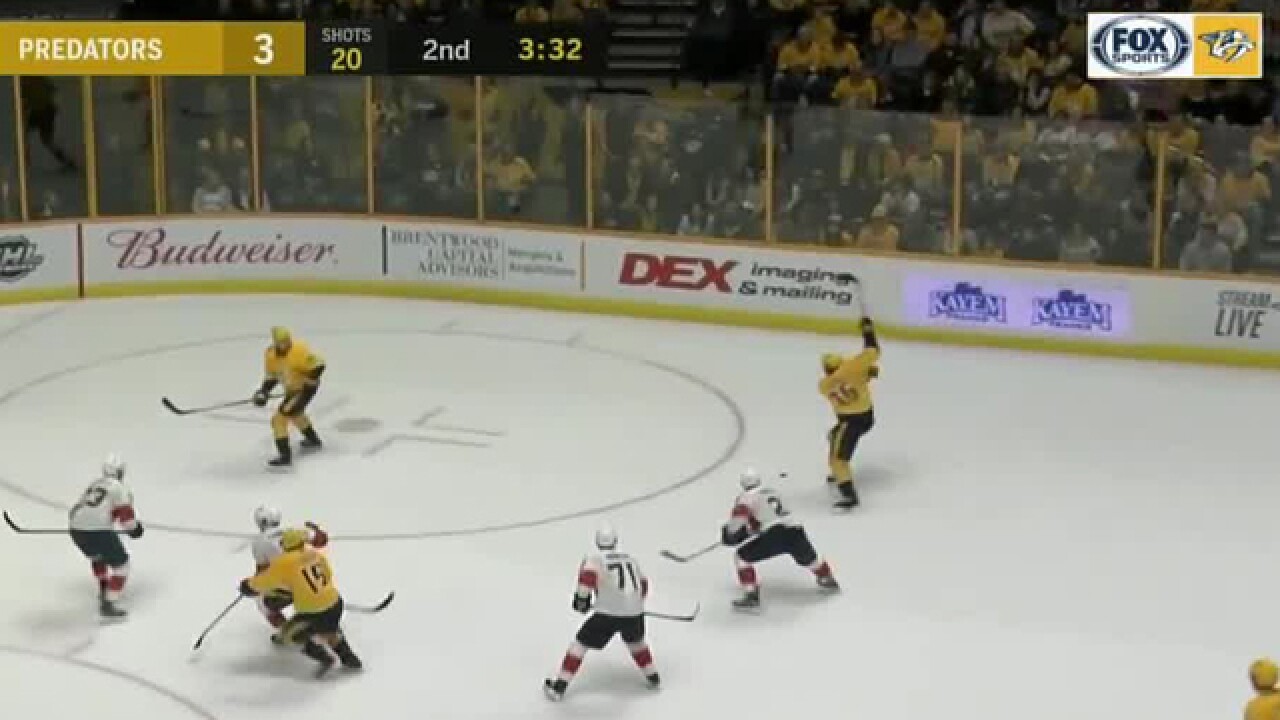 P.K. Subban scored to cap a three-goal second period for Nashville, and the Predators beat the Florida Panthers 4-3 on Saturday night for their fifth straight victory.

Kevin Fiala scored two goals, and Nick Bonino had a goal and two assists for his first multi-point game since joining Nashville as a free agent last summer. Calle Jarnkrok had three assists for the first time in his career.

Pekka Rinne made 37 saves to improve to 23-8-3 for the Predators, who matched their longest winning streak this season.

The Panthers gave goalie James Reimer the night off on the second game of a back-to-back, with Florida coming off a 4-3 home win over the Vegas Golden Knights. Reimer had started 17 straight games, so Harri Sateri got his first NHL start.

The Predators had lost two straight to Florida coming into the first game between the teams this season.

Fiala gave the Predators a lead 36 seconds into the game. He scored on a snap shot from the slot, beating Sateri between his pads.

The Panthers took a 2-1 lead with Trocheck beating Rinne with a backhand off a rebound for a power-play goal at 11:16 of the period, and MacKenzie scored on a snap shot, putting the puck over a stretching Rinne at 16:33 off a nice pass from Colton Sceviour. Subban skated up to help Rinne on a breakaway by Dadonov at the end of the period.

Nashville took the lead in the second, starting with a goal 1:24 into the period that Florida challenged for goaltender interference. The goal by Bonino wasn't even called a goal for a couple of confusing minutes, and the goal song even played twice. Jarnkrok had hit the puck over Sateri's pad, Florida defenseman Mike Matheson went into the net to try to block it, and Bonino eventually was credited with getting it over the line for his seventh this season.

Fiala put the Predators ahead at 10:53 with a wrister from the slot past Sateri's glove, with Bonino feeding him the puck from behind the net. Subban added his 10th off a slap shot that went over Sateri's right shoulder at 3:31 for a 4-2 lead. That gave Subban 34 points, tying him with Filip Forsberg for the team lead.

Yandle pulled the Panthers to 4-3 with a slap shot from center ice that caught Rinne by surprise at 8:34 of the third. Florida pulled Sateri late, but Rinne made a pad save on a backhand from Trocheck in the slot with 1:15 left along with a flurry of other saves.