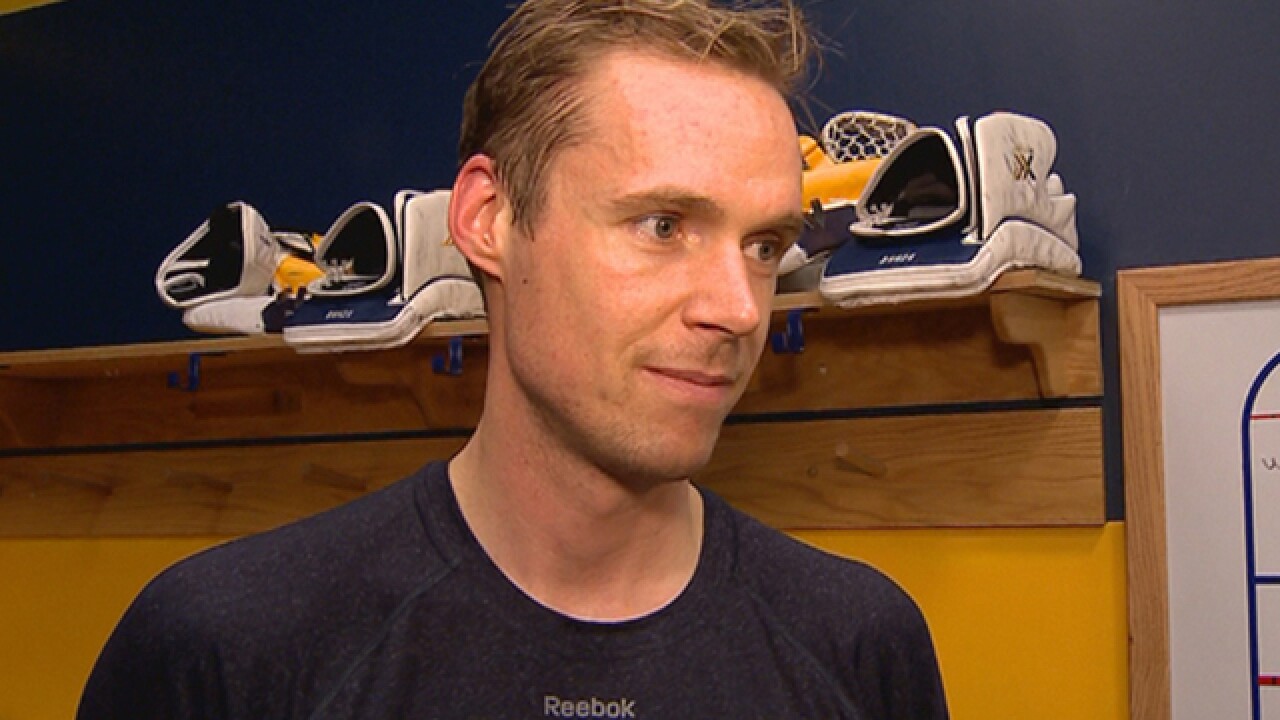 Pekka Rinne made 33 saves in his 300th career win and the Nashville Predators routed the San Jose Sharks 7-1 on Thursday night.

Nick Bonino, Ryan Johansen and Viktor Arvidsson each had a goal and an assist, and Scott Hartnell, Kevin Fiala and Mattias Ekholm also scored for Nashville, which has won three straight. The Predators moved within one point of expansion Vegas for the Western Conference lead.

All of Rinne's wins have come with Nashville. He tied former Predators goalie Tomas Vokoun for 33rd place in NHL history.

Bonino scored the game's first goal at 1:55 of the opening period.

Josi's shot from the left point hit traffic in front and Bonino beat Sharks defenseman Dylan DeMelo to the puck near the left post. Bonino took it around the net and beat goalie Aaron Dell to the right post with a wraparound for his ninth of the season.

Hartnell made it 2-0 with 42.5 seconds remaining in the first.

From the right boards, Bonino made a no-look backhand pass to Hartnell, who was skating through the slot and tipped it by Dell.

Couture shaved the Nashville lead in half at 8:39 of the second.

After skating the puck below the goal line on the right side, Couture lifted a seemingly harmless backhand toward the Nashville net and the puck somehow squeezed between Rinne and the near post for Couture's team-leading 25th of the season.

Nashville regained a two-goal lead at 15:57.

Fiala carried the puck into the San Jose zone on the right side on a 2-on-1 with Craig Smith against DeMelo. Fiala attempted a forehand-to-backhand move, but lost control. The puck's momentum carried it forward and it slipped between Dell's pads.

Arvidsson scored a power-play goal at 3:49 of the third, his fourth goal in three games. Johansen scored 2:40 later from the slot. Ekholm made it 6-1 at 11:00 of the third and Jarnkrok concluded the scoring at 17:51.

NOTES: Smith had one assist, extending his point streak to six games. ... Arvidsson played in his 200th NHL game. ... San Jose went 0 for 5 on the power play. The Sharks have not scored with the man advantage in their last seven games. ... The Sharks are 4-5-2 against Central Division teams this season.

UP NEXT
Sharks: Visit the Chicago Blackhawks on Friday.
Predators: Host the St. Louis Blues on Sunday.