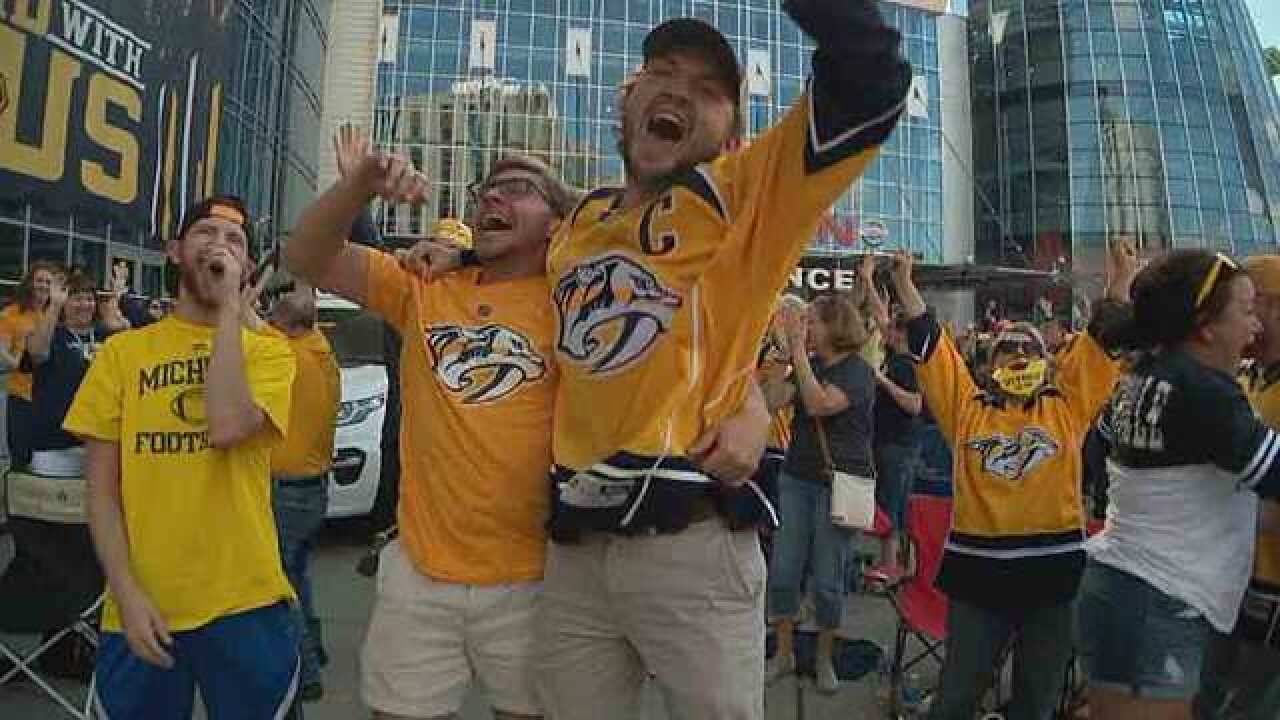 The Office of Mayor Megan Barry has released viewing party plans for the Stanley Cup Final.

According to the mayor, Games 3 and 4 will be held in Nashville on June 3 and 5. Both games will be celebrated and watched at a free Broadway Smash party.

During these parties, live music and big screens will take over Lower Broadway. A pre-game concert has been set to feature special guests starting around 4 p.m. both days. The artists that will appear have not yet been announced.

The events, called the Broadway Smash: Preds Party with a Purpose, will be free and open to the public.

For Games 3 and 4, a stage will be set up at 5th and Broadway facing the Cumberland River. There will be large screens at the stage and other locations.

For the away games in Pittsburgh — Games 1 and 2 — the mayor said the city will hold the Preds Party in the Park at Music City Walk of Fame Park. These games have been set for May 29 and 31.

For those games, the pre-game broadcast will be shown on a large screen at 6:30 p.m. followed by the game at 7 p.m.

Reports stated official merchandise will be available to purchase, and DJ Robert Luke has been scheduled to entertain the fans.

Preds mascot GNASH and the Predators Energy Team will make appearances at all parties, and food trucks will be on site.

Those who would like to attend the parties for the away games at Walk of Fame Park have been invited to bring blankets and lawn chairs.

At the Broadway Smash for home games on Lower Broadway, lawn chairs and small bags — no bigger than 12x12 inches — will be allowed.

Rules for public safety will be strictly enforced, including no coolers, backpacks, or large bags at any party. For a complete list of rules, click here.

“Nashville knows how to celebrate world-class sports with world-class music and the world’s best hockey fans,” Mayor Barry said. “Only in Nashville could you have A-list artists on hand and excited to help the city come together for great music while we cheer on our Nashville Predators. We can’t thank the fans enough for their enthusiasm and all the Metro agencies and community partners who will make these events possible.”

“The excitement at these parties has been as electric as what we’ve seen inside Bridgestone Arena,” Sean Henry, President and CEO of the Nashville Predators, said. “This is a great way for us to thank the fans and accommodate our growing fan base. We know we could not have made this historic run without the support of the most important member of our team – the seventh man, representing all the fans.”

Below are the scheduled locations for all parties, including Games 5 through 7 if they're needed:

According to reports, all times and locations may change. Each party has been set to end at the conclusion of each game.

On May 29 for Game 1, the first 500 Lyft customers going to or from Walk of Fame Park for the party can get a free ride with promo code WINTHECUP (up to $10/ride).