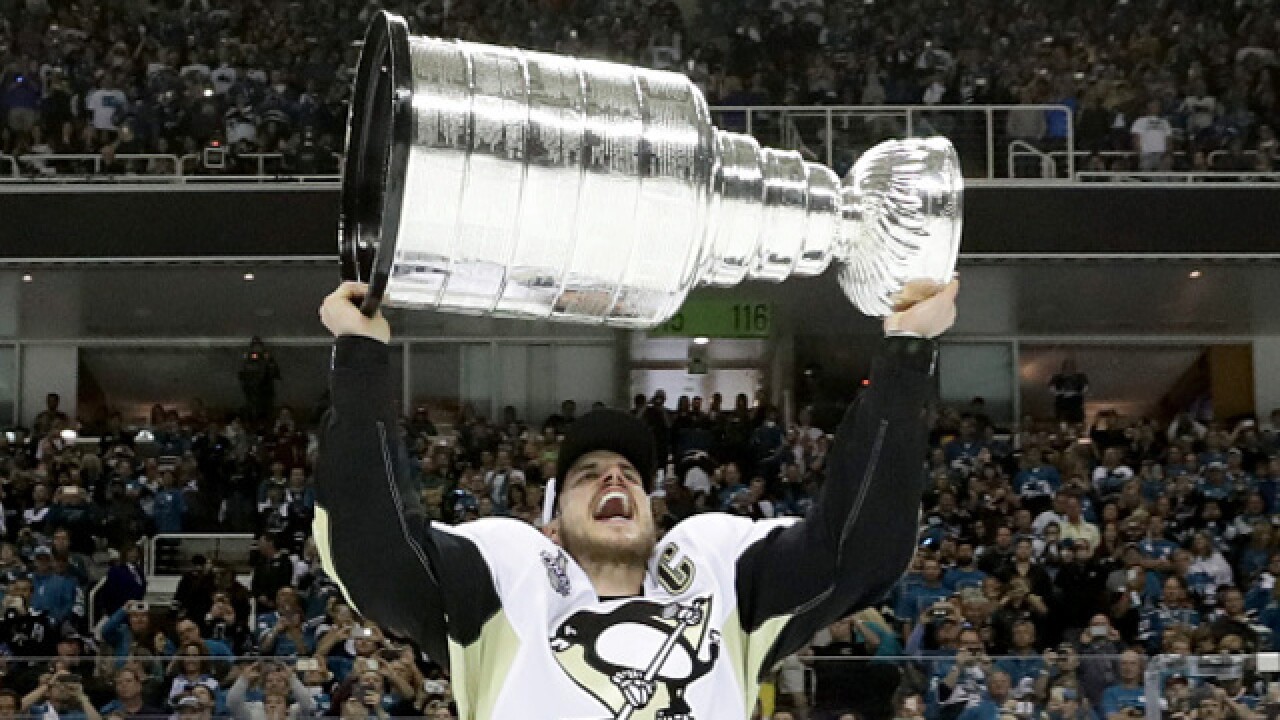 Copyright 2017 Scripps Media, Inc. All rights reserved. This material may not be published, broadcast, rewritten, or redistributed.
&lt;p&gt;SAN JOSE, CA - JUNE 12: Sidney Crosby #87 of the Pittsburgh Penguins celebrates with the Stanley Cup after their 3-1 victory to win the Stanley Cup against the San Jose Sharks in Game Six of the 2016 NHL Stanley Cup Final at SAP Center on June 12, 2016 in San Jose, California. (Photo by Bruce Bennett/Getty Images)&lt;/p&gt;

Brandon Saad scored three times in his return to Chicago and Ryan Hartman had a goal and four assists, helping the Blackhawks pound the Pittsburgh Penguins 10-1 on Thursday night.

Nick Schmaltz added two goals and an assist as Chicago kicked off its season in style with a runaway victory against the two-time defending Stanley Cup champions. Patrick Kane also had a goal and three assists in the Blackhawks' highest scoring game since a 10-1 win against Winnipeg on Oct. 12, 1988.

Pittsburgh was coming off a 5-4 overtime loss to St. Louis in its season opener on Wednesday, and it looked every bit like a team on the second half of back-to-back nights. Antti Niemi was pulled after allowing four goals on 13 shots in his Penguins debut, forcing Matt Murray to come in after he took the loss against the Blues.

Sidney Crosby found Phil Kessel for a power-play goal at 2:05 of the second period, but Chicago already had a 5-0 lead at that point. It was the most goals allowed by Pittsburgh since a 10-8 loss to San Jose on Jan. 13, 1996.

The Blackhawks won the Central Division last season and finished with the most points in the Western Conference. But they were swept by Nashville in their second consecutive first-round loss, leading to a flurry of moves by admittedly angry general manager Stan Bowman.

After Saad got his first off a rush with Panik, Kane made another great pass to set up Schmaltz's backhander at 7:34. Saad then beat Niemi with a well-placed shot through a crowd in front, and the rout was on.

The 24-year-old Saad began his career with Chicago and helped the Blackhawks win two Stanley Cups before he was traded to Columbus after the 2015 season. Bowman got him back in a blockbuster trade with the Blue Jackets in June, parting with dynamic winger Artemi Panarin in a multiplayer deal.

For one night at least, it looked like a smart move. Saad finished off his hat trick at 5:21 of the third, and Seabrook made it 10-1 with a rebound goal with 6:15 remaining.

Hartman set a career high for points and assists in a game in Chicago's highest-scoring opener, topping an 8-6 victory at Nashville on Oct. 5, 2006. Sharp also scored in his return to Chicago after signing a team-friendly, one-year deal with the Blackhawks in the offseason.

The one downer for the Blackhawks was an injury for Schmaltz in the third. He skated off gingerly at 7:49 and was helped to the locker room.