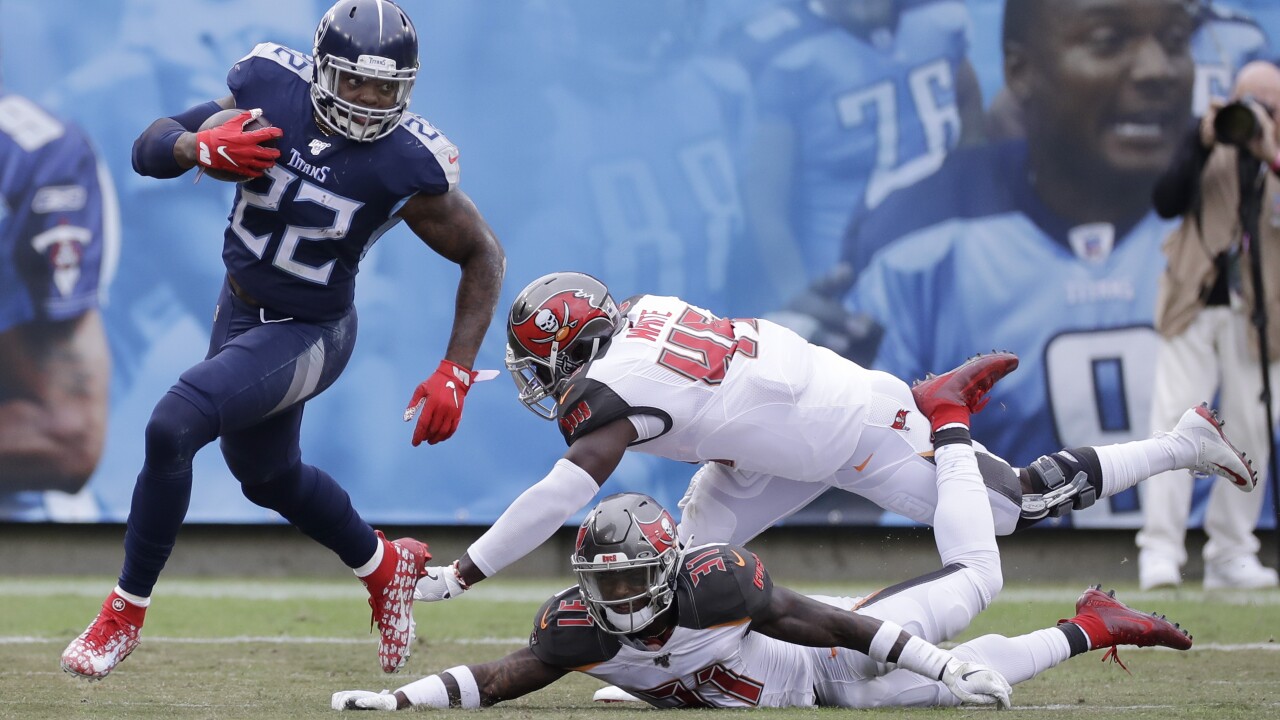 Tennessee came in with the NFL's No. 4 scoring defense, having not allowed more than 20 points in a game all season. The Buccaneers entered with the league's fourth-best offense, averaging 28.8 points a game, and they became the first to top the mark.

The Titans (4-4) led 14-3 after turning a pair of first-quarter turnovers into two TD passes by Tannehill.

The Bucs (2-6) lost their third straight and fourth in five games despite Jameis Winston and Mike Evans putting the Bucs up 23-17 by connecting on a TD pass at the end of the first half and a second early in the third quarter. They wouldn't score again despite outgaining Tennessee 389-246.

Tampa Bay couldn't overcome four turnovers -- all by Winston, who now has 10 combined turnovers over his past eight quarters.

After Harold Landry III sacked and stripped Winston of the ball with 6:03 left, the Titans had a chance to pad their lead. Coach Mike Vrabel chose to fake a field goal on fourth-and-2. Punter and holder Brett Kern was stopped for no gain, turning the ball over to the Bucs with 3:41 left.

The Bucs drove to the Titans 32 and had the 2-minute warning to think over a play for fourth-and-1. Winston handed off to Peyton Barber out of the shotgun, and Jurrell Casey and Jayon Brown stopped him for a 1-yard loss.

Tampa Bay had a final chance, getting the ball back with 42 seconds to go, but Logan Ryan intercepted Winston with 18 seconds left to seal the win.

Jason Pierre-Paul sacked Tannehill on his first snap in his first game after being activated from a neck injury suffered in an offseason car accident, and Shaq Barrett got his 10th sack of the season. The Bucs finished with three sacks.

The Titans led 17-15 at halftime thanks to those early turnovers by Winston. Rookie defensive lineman Isaiah Mack recovered a quick shotgun snap to Winston to set up Tannehill's 5-yard TD pass to Jonnu Smith, and Malcolm Butler caught Winston's overthrown pass to Chris Godwin and ran to the Titans 10. Tannehill made it 14-3 with a 6-yard TD pass to Tajae Sharpe.

Tennessee held Tampa Bay to three field goals early, the last after third-and-goal at the Tennessee 4 because Dare Ogunbowale was knocked to the ground after taking the handoff by teammate Breshad Perriman.

Titans left guard Rodger Saffold went down on a pass play in the first quarter and went to the locker room to be evaluated for a concussion. He did not return and Jamil Douglas replaced him. Three-time Pro Bowl left tackle Taylor Lewan went to the sideline with 1:42 left.