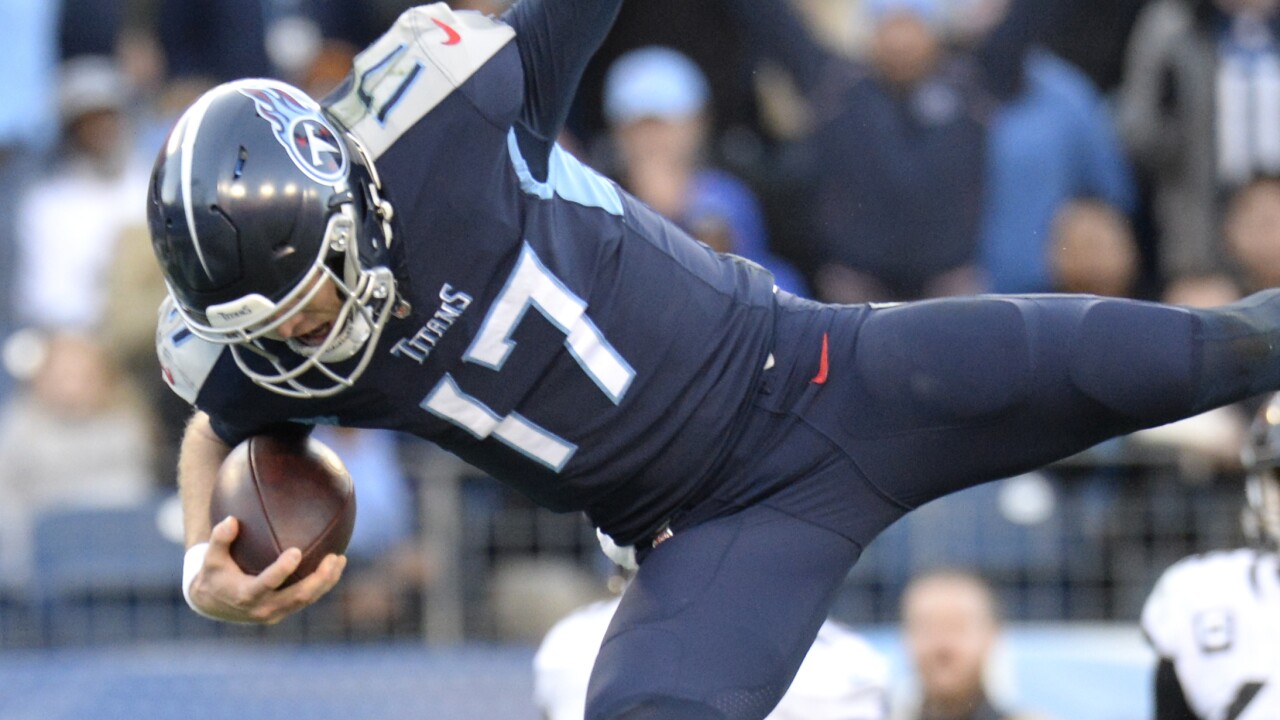 NASHVILLE, Tenn. (AP) — The Tennessee Titans scored four touchdowns over six offensive plays in the third quarter, routing the Jacksonville Jaguars 42-20 Sunday for their second straight victory to keep themselves firmly in the AFC playoff hunt.

Ryan Tannehill ran for two TDs and threw two TDs to improve to 4-1 as Tennessee's starter. Derrick Henry ran for two TDs just 16 seconds apart, and rookie receiver A.J. Brown capped the scoring spurt with a 65-yard TD catch that made it 35-3 with 6:57 left in the third quarter.

The Titans (6-5) are tied with Indianapolis and Oakland just outside the AFC's final wild-card spot -- their next two opponents with both on the road.

Jacksonville (4-7) lost its third straight, the past two since Nick Foles returned to the lineup.

The Jaguars had nine sacks in beating the Titans 20-7 in September with Marcus Mariota at quarterback for Tennessee. They sacked Tannehill only once, though they forced a pair of fumbles by Tennessee. Ranked 29th in the NFL against the run, the Jaguars gave up 219 yards as the Titans had a 471-369 edge in total offense.

Leonard Fournette had a pair of 1-yard TD runs and finished with 97 yards.

Tannehill ran for a 21-yard TD, jumping over Jaguars cornerback Tre Herndon at the goal line for a 7-3 halftime lead. The Titans seized control scoring three TDs on consecutive offensive plays in the third with the fourth coming at the end of a three-play drive:

-- After a three-and-out by Jacksonville, Henry went through the middle to the left sideline stiff-arming Jaguars safety Jarrod Wilson to the ground on his way to a 74-yard TD.

-- Linebacker Daren Bates stripped Michael Walker of the ball on the kickoff, and Henry scored on a 7-yard TD run on the next snap.

The Jaguars recovered an onside kick after Fournette's second TD but touched the ball before it went 10 yards. Tannehill ran for his second TD four plays later.

Jaguars safety Ronnie Harrison suffered a concussion late in the first quarter and did not return. Herndon was evaluated for a concussion after trying to tackle Tannehill. He was cleared and returned.

Titans left tackle Taylor Lewan went down after taking an apparent shot in the ribs at the end of the first quarter. He missed the next play where Jaguars defensive end Yannick Ngakoue beat Lewan's replacement to sack Tannehill and strip him of the ball to start the second quarter. Titans cornerback LeShaun Sims hurt an ankle.