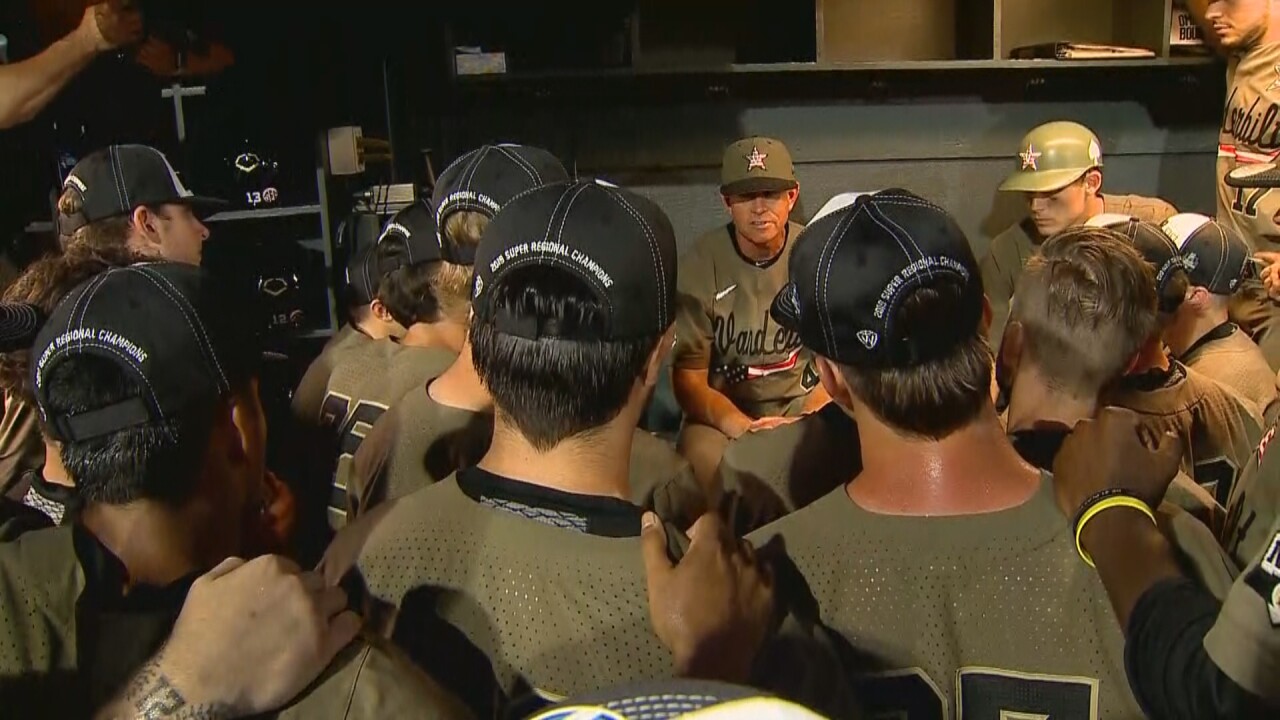 Vanderbilt won the 2014 championship and was the runner-up in 2015. The nation's No. 2 overall seed matched the program record for most wins in a season with a nation's best 54 victories. The Commodores, who have won 14 of 15, will play Louisville to open the College World Series.

Mason Hickman struck out nine over four innings, picking up where Kumar Rocker left off with a no-hitter Saturday night striking out the final three batters he faced as the right-hander struck out the side to open Sunday's game. Then Hickman got all the support he needed with a 4-run first by Vanderbilt.

Martin led off with a home run to left-centerfield, giving Vandy a 1-0 lead. Ethan Paul reached base on an infield single, then stole second and third with Bill Chillari walking Philip Clarke with one out. Pat DeMarco hit a 3-run home run that hit Memorial Gym beyond the 32-foot-high wall in left.

Patrick Raby (10-1) got the win, striking out four in two innings of relief.

Chillari (2-4) walked the first batter he faced in the second, and Duke coach Chris Pollard went to Jack Carey. Martin hit his second home run in as many at-bats, a two-run homer to left for a 6-0 lead. Ty Duvall made it 7-1 with an RBI double in the third, and he scored on Julian Infante's liner down the third base line.

Stephen Scott added a solo homer in the fourth, and Infante hit one in the fifth.

Duke avoided being shut out for a second straight game when Rudy Maxwell, from Brentwood, Tennessee, hit a home run in the third. Michael Rothenberg added a solo homer in the fourth. Duke also got centerfielder Kennie Taylor back in the lineup after being hit by a Rocker pitch near his left eye in his first at-bat Saturday night. He struck out his first four at-bats.

VANDY'S HOMERS
The Commodores just keep adding to the school record for home runs in a season. They set the mark at 87 in the regional and added one in the super regional opener before hitting five more Sunday for 92. The previous mark had been 86 set in 1985. Vanderbilt last hit five homers in a game April 20 against Alabama.
ANOTHER DORE
Infante was the MVP of the regional with three home runs. Martin drove in six runs in this super regional.

LIGHTNING DELAY
These teams waited out a 3-hour, 10-minute delay before Game 1 Friday night, then sat through a 2-hour, 36-minute delay for lightning with one out in the bottom of the sixth with only a few drops of rain.

UP NEXT
Duke: The Blue Devils (35-27) finish still looking for their first College World Series berth since 1961 after their second straight super regional berth.
Vanderbilt: CWS opener against Louisville in Omaha, Nebraska.