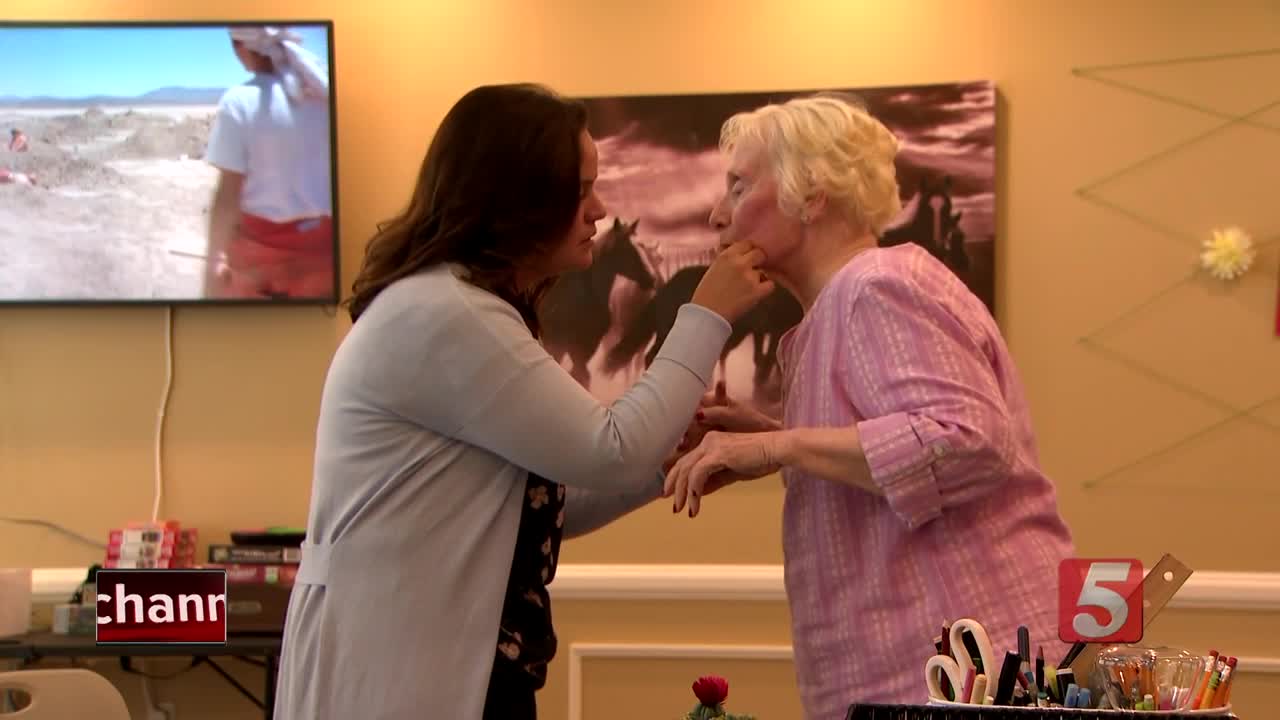 In Tennessee, there are about 120,000 people living with Alzheimer's, which means there are roughly 444,000 caregivers. Of the number of caregivers, about 110,000 of them are millennials. 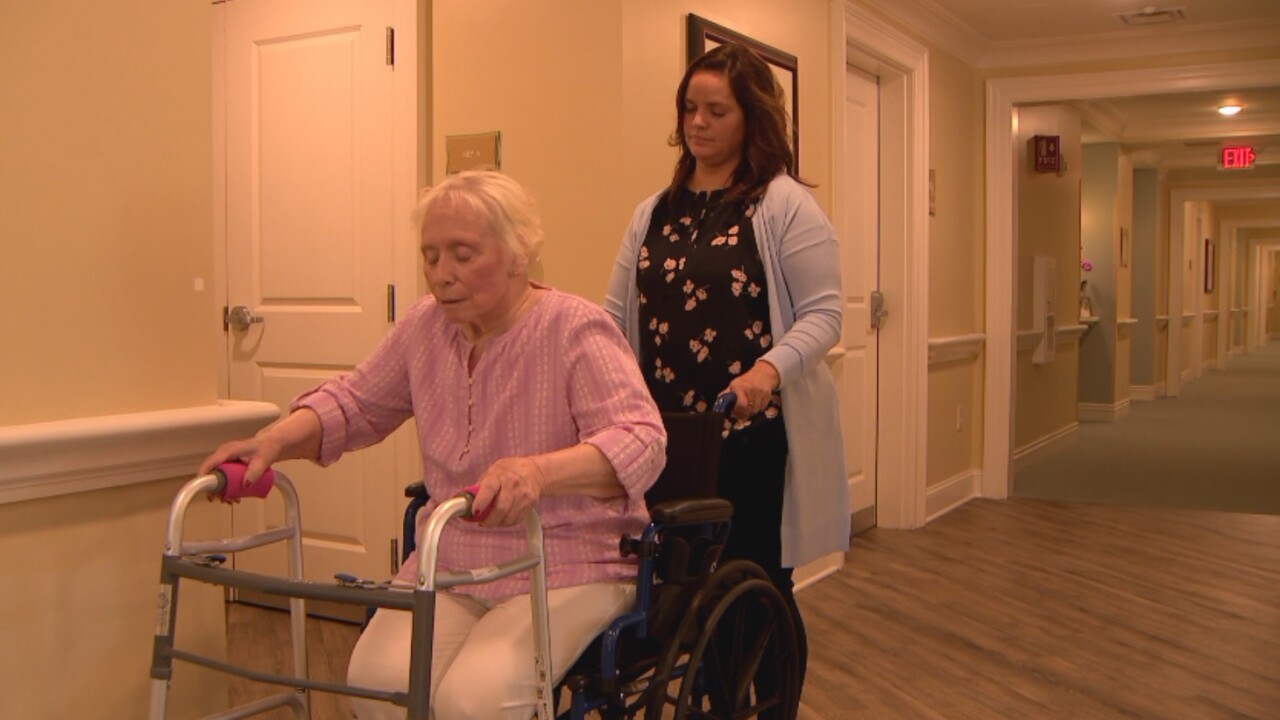 NASHVILLE, Tenn. (WTVF) — She likes her hair curled and loves pink blush on her cheeks. Joan Dunsire is 82-years-old and may not be able to speak much, but her desire to get dolled up is one fun way of expressing herself.

Running the hair brush and swiping the makeup brush is Amy Grace Dunsire. She is Joan’s 32-year-old daughter who visits her at a memory care facility every single day.

The time spent together is precious, heartwarming and heartbreaking.

Matthew Torres has talked with a young caregiver taking care of her mother. Hear from them on NewsChannel 5 at 6 -- we'll also post the video on NewsChannel5.com as soon it's ready.

Joan has been battling moderate Alzheimer’s for seven years, but her daughter suspects the symptoms lingered for nearly two decades.

Unlike the typical images of Alzheimer’s patients in their hospital bed, Joan is still able to walk using a walker and read, just ever so slightly.

The disease is stealing memory, time and health, but Amy Grace is pushing through by finding moments to laugh, even though her mother may not always remember her name.

“I think I tell my mom I love her about ten times a day, and I try to get her to say it back to me and I think it makes me feel better,” Amy Grace said. “All the staff says she knows exactly who I am, but she can’t verbalize it.”

The fear of losing her mother, a former NICU nurse, is a reality Amy Grace knows all too well.

Joan and Ken were married for 56 years and lived in Kentucky before they moved to Tennessee. He was diagnosed with the disease one year before his wife.

Amy Grace remembered visiting her parents to find them losing track of their medication, not changing clothes or not getting rid of expired items in the fridge.

Alzheimer’s is the most common cause of dementia among older adults. It is currently ranked as the sixth leading cause of death in the country.

More than five million Americans have Alzheimer’s or another form of dementia, but the number is projected to rise to nearly 14 million people by 2050, according to the Alzheimer’s Association.

In Tennessee, there are about 120,000 people living with the disease, which means there are roughly 444,000 caregivers. Of the number of caregivers, about 110,000 of them are millennials.

The Alzheimer’s Association considers millennials as people in the ages between 23 and 38 years old.

“This is a time in your life when you are really looking at big life decisions and now you have to add on that responsibility of caring for someone and it's a full-time thing,” Alzheimer’s Association Tennessee Chapter Director of Communication Sarah McCarthy said.

By 2025, the state is looking at an additional 15,000 millennials that will become caregivers.

There's no room for anything else

Taking care of her mother has become a full-time job on top of her career.

Amy Grace works for a hospitality management company and is in a busy season to helping open a new restaurant.

She tends to her mother daily to make sure everything is ok but admittedly, it has been tough on her personal life.

She is thankful her company has been flexible with her schedule. However, it is not the same for many people in her position.

A recent report by UsAgainstAlzheimer’s and the USC Edward R. Roybal Institute on Aging stated about one out of two millennial dementia caregivers mentioned caregiving interfered with work, and 33 percent reported severe interference which include cutting back hours, losing job benefits or being fired.

There is also the financial toll it is having on the younger generation.

One in three employed millennial caregivers of any kind earns less than $30,000 per year, according to an AARP report.

Amy Grace is getting help for now through her mother’s long-time insurance plan and sitters who would visit the facility, but in the future, she is expecting her mother to move in with her.

“I have to be positive,” she said. “It made me realize I’m a lot stronger and more patient than I could be.

Younger generation of caregivers amid research

The average age of a person taking care of a dementia patient is 27-years-old.

Of the 40 million family caregivers, about 1 in 4 is part of the millennial generation, according to AARP.

In many cases, the loved one is dealing with a form of dementia.

Younger people are having to take on new roles with more diagnoses in the state.

“We are seeing research advance to the point that we're diagnosing this earlier and sooner, so you're seeing these people being forced to step into a caregiver role at a younger age,” McCarthy explained.

McCarthy also said there are more “sandwich generation caregivers” who not only take care of their parent but a child as well.

You are not alone

In the UsAgainstAlzheimer’s report, 79 percent of millennial caregivers felt emotional distress and reported difficulty in accessing affordable outside help.

It is an opportunity for people to reach out and speak with specially trained clinicians, and connect with doctors, memory care facilities, day programs, respit care or support groups.

Tennessee approved to create an Alzheimer’s Advisory Council to address the crisis.

With Tennessee being fourth in the nation with the most Alzheimer’s deaths, the council hopes to figure out the current climate and what more could be done to help patients and their families.

The council will have to create a report by January 2020.