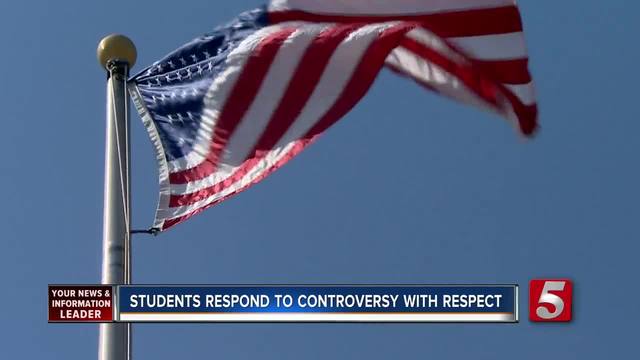 One day after students all across the nation walked out to protest gun violence, Antioch High School students stood outside the school in protest and in solidarity a second time after their first attempt went south.

On Wednesday, students at the school went outside to protest gun violence, but partway through the protest, some students tore down the American flag, stomped on it, and damage a police car.

"We were organized to go outside, stand outside, and protest peacefully gun violence and honor the 17 lives that were lost [in Parkland, Florida], but that didn't exactly happen, unfortunately," Amanda Arias, drum major for the Antioch High School marching band, said.

Video of the incident spread quickly on social media and made it to an international audience, which upset many of the students at Antioch High School.

"The few people that were disrupting and being selfish, we don't want them to define who we truly are," Arias said.

Fellow drum major, Sarah Moseley, agreed. "There's 2,200 people in this school, so it was a small portion that represented the entire school wrong."

After seeing what happened, some administrators, including the director of bands, spoke with one another and decided something needed to be done. They ended up contacting every member of the band, more than 100 members, and asking if they'd like to get to school early, play the National Anthem, and raise the American flag while honoring the victims in Florida. Every single band member showed up, voluntarily.

"It felt really prideful just to see the flag be raised again while the band was playing the National Anthem," Fares Ali, a drummer with the band, said.

The students said they hoped their actions would show that the few don't define the many.

"You can still be proud that we still did it the correct way, even if it's a day late," Ali said.

Police and school officials are still investigating Wednesday's incident, and disciplinary actions will likely be taken.