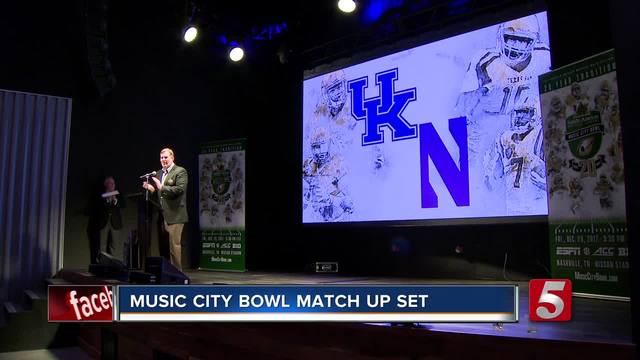 Middle Tennessee has been set to take on Arkansas State in the Camellia Bowl.

The game will be held in Montgomery, Alabama at 7 p.m. on Saturday, December 16.

.@MT_FB vs Arkansas State in the @CamelliaBowl on Dec. 16 at 7 PM! This is the first time in program history the #BlueRaiders have going to three-consecutive bowl games! pic.twitter.com/zpP5AYdynU

Arkansas State’s Ja'Von Rolland-Jones has been needing one more sack to break the career FBS record of 44 held by Terrell Suggs and Jonathan Peterson. The team ended the regular season with a 32-25 loss to Troy on a touchdown with 17 seconds left with a share of the Sun Belt title on the line.

Also of note, Western Kentucky University will be taking on Georgia State in the Cure Bowl. That game has been scheduled for 1:30 p.m. on Saturday, December 16 in Orlando, Florida.

Also announced today, Kentucky will take on Northwestern right here in Nashville in the Music City Bowl set for 3:30 p.m. on Friday, December 29.

This is the Music City Bowl's 20th year. Founders met at Top Golf Sunday to celebrate the matchup. The event comes during a busy week, with a Predators game the day after and New Years Eve on Sunday.

"It's really unbelievable," said Dan Crockett, president of Franklin American Mortgage Company. "I remember the first game in 1997, Virginia and Alabama Tech. It was sleeting, so I remember thinking then, not only as a business person but a football fan as well, I'm not sure this is going to work. But every year things seem to get better."

Fans of both teams also responded favorably to the matchup.

"It's great news. In Kentucky, we're just so happy to be in a bowl game. We'll take it. We'll be happy about it," said John Harris. Harris said he was at the last Music City Bowl Kentucky played in 2009.