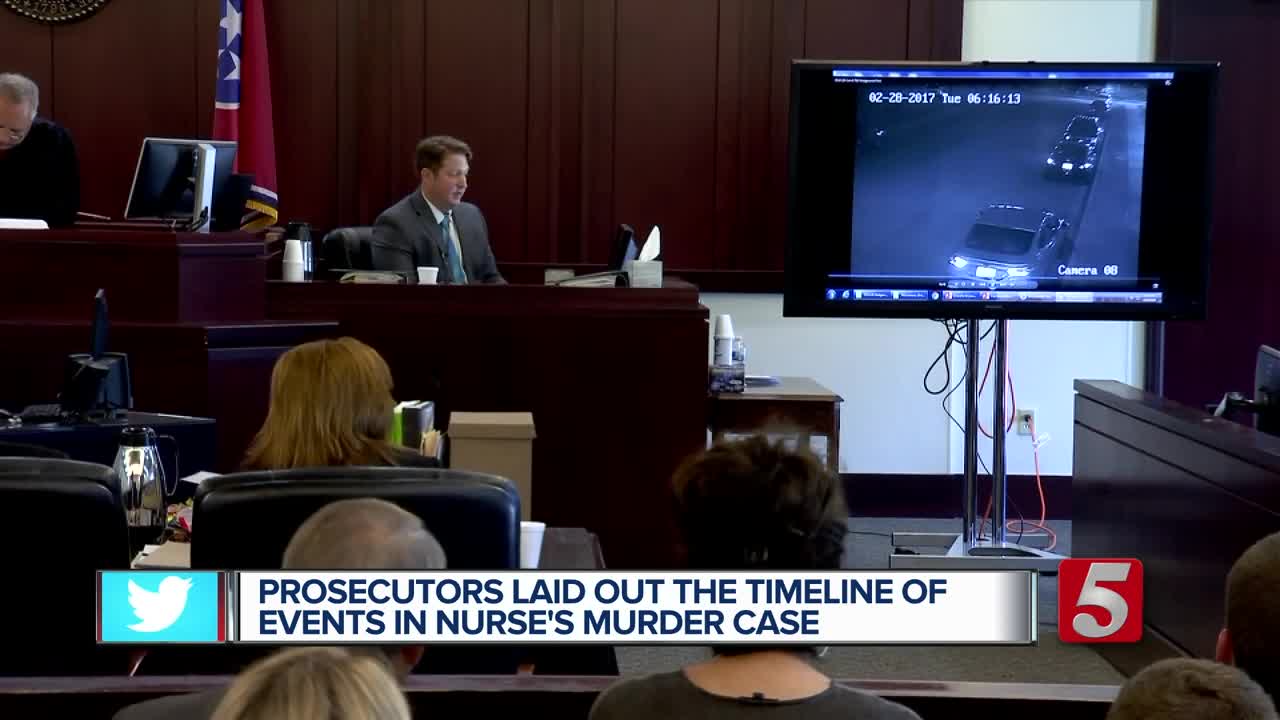 The trial continues Wednesday for the man accused of stabbing a Nashville nurse to death inside her condo.

The trial continued Wednesday for the man accused of stabbing a Nashville nurse to death inside her condo.

Christopher McLawhorn allegedly entered Tiffany Ferguson's Wedgewood Park condo through an unlocked door in February of 2017, and stabbed her to death in her bed.

Chandler said from his observation, Ferguson had severe stab wounds to her chest. He also said he noticed small drops of blood when first arrived to the condo but said it came from when she was transported to the hospital.

He says she was moved because emergency responders believed her life could be saved.

Det. Chandler explains how he interviewed a homeless man originally thought to be a potential suspect. He says he was cooperative and had clothes that did not match what was seen on surveillance video from the complex. @NC5pic.twitter.com/UtP3UNGy7b

New surveillance video was shown in the courtroom showing Ferguson and a friend getting home at 2:36 a.m. The friend then left in a rideshare at 3:13 a.m.

Downtown surveillance videos were also shown of who is suspected to be McLawhorn and a homeless friend at 2:52 a.m., who later reported him to police for trying to break into cars.

The detective used surveillance video to show the jury McLawhorn leaving Ferguson’s apartment with a laptop and purse in hand. He leaves it behind the utility box before waking back into her condo.

He said  McLawhorn could be seen stashing items and walking back into Ferguson’s apartment and spends about 11 minutes before walking out with other items.

More video was shown of McLawhorn pawning a ring the morning after her death at a shop within walking distance of her condo.

Family members were present for most of day three's testimonies except for the medical examiner. She explained autopsy pictures of Ferguson, which showed the number of stab wounds she suffered. Majority of her family and friends stepped out of the courtroom.

On Tuesday, David Faulk – a former cellmate of McLawhorn – claimed he confessed to killing Ferguson.

Faulk said McLawhorn was rummaging through Ferguson’s drawer with a flashlight when she woke up and screamed. He allegedly said he stabbed her once but changed his story that he may have blacked out and stabbed her more.

He said other inmates heard about McLawhorn’s story, that he was proud of it and would even laugh about it.

A homeless friend, currently an inmate in Wisconsin, also testified, saying he was with McLawhorn the night Ferguson died. He said he reported him to police for trying to break into cars and did not see him until after Ferguson was killed.

An acquaintance, who goes by the nickname “Guitar Josh,” also took the stand and said he saw McLawhorn the day after she was killed. He claimed he received text messages from McLawhorn implying he should help with the coverup since he had been questioned by police.

Two forensic experts also testified on Tuesday that none of the fingerprints from Ferguson’s condo were a conclusive match of McLawhorn. A knife, which was found outside of the complex and believed to the murder weapon, had DNA samples on it but it was not definitively linked to McLawhorn.

During opening statements on Monday, prosecutor Pam Anderson said McLawhorn stabbed Ferguson nine times, including in the rib and heart.

Prosecutors said McLawhorn was seen on surveillance video running towards Interstate 65. During the investigation, authorities found several items, including a laptop, jewelry and a 6-inch kitchen knife that belonged to the condo.

One of the officers presented the knife to the 14-member jury, which is believed to be the murder weapon.