Disclosure Law Makes It Easier For Car Dealers To Be Deceitful 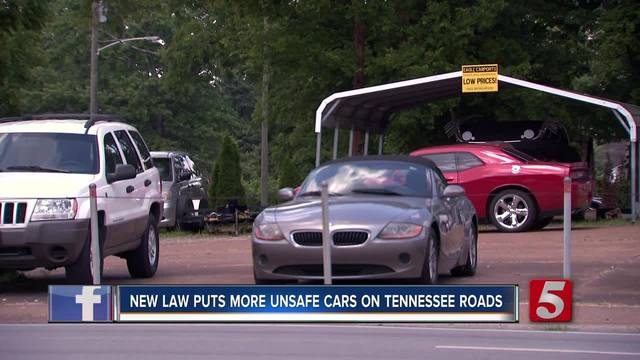 In January, we introduced you to a law quietly passed that threatened to turn Tennessee into a dumping ground for dangerous cars. About seven months later, consumer advocates have shared exactly how the legislation directly impacts consumers and could indirectly impact anyone who drives on Tennessee roadways.

In January, we introduced you to a law quietly passed that threatened to turn Tennessee into a dumping ground for dangerous cars . About seven months later, consumer advocates have shared exactly how the legislation directly impacts consumers and could indirectly impact anyone who drives on Tennessee roadways.

The Motor Vehicle Recall and Disclosure Act allowed used car dealers to sell vehicles under safety recall as long as the buyer signs a disclosure form. But advocates like Andy Spears argued a majority of buyers will overlook that sheet of paper, which will likely be lumped in with the dozens of other forms a person is asked to sign while buying a car.

Spears chose to test the law first hand and record the conversation. He drove to a large, chain dealership in Nashville to check out a used Acura.

"I found a car online and I knew it had the airbag recall just like the car I already own," said Andy Spears, a consumer advocate with Tennessee Citizen Action. "I just wanted to see if they would mention it and what they would say."

In the recording, Spears mentions that he knows the car is under an airbag recall. The salesperson acknowledged the recall but said the fix would be easily available.

"I know from my own experience it took about six months to get that very same repair made," Spears said. "So it’s not an easy fix."

The wait to receive parts to fix a recall can take months, but driving the car even for one day can have deadly consequences. Former Tennessee residents Jay and Geri Gass lost their daughter in a crash caused by a recalled car.

Just days after the Gass' received notice from the car manufacturer about the safety defect, Lara Gass' ignition switch failed and caused her to crash on an interstate. She died instantly.

The Gass' advocated for a law to protect car consumers over the span of several years at the Tennessee Capitol. They promoted a law that would ban dealers from selling recalled cars until the problem as fixed.

Ultimately, Sen. Frank Nicely (R) drafted the current legislation, which does more to protect dealers than consumers and is exactly what the Gass' advocated against. The family has since relocated out of state.

Consumer advocates said they aren't hopeful the legislation will be repealed any time soon.

"Unfortunately, I think what it’ll take is for one or more people to die," Spears said. "That’s usually what gets lawmakers’ attention. We’d like to raise awareness before that happens."

Spears said the best way consumers can protect themselves is to run the vehicle's VIN number through www.safercar.gov .

If a car you'd like to purchase is under recall, ask the dealer to fix it before you buy.

"There’s no reason even used car dealer can’t get that fixed," Spears said. "If they won’t do that I would not buy that car and I would not deal with that dealer."