Family of Kyle Yorlets calls for accountability from Nashvillians, teens to be sent to adult court 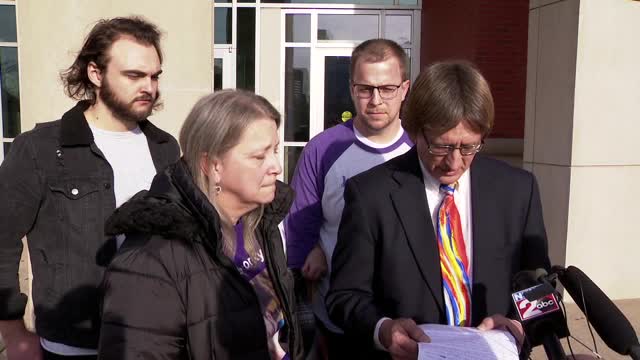 The family of shooting victim Kyle Yorlets read a statement at a hearing for teens accused of killing him. They said the teens should be sent to adult court to be held responsible for killing their loved one.

NASHVILLE, Tenn. (WTVF) — The family of Nashville musician Kyle Yorlets is calling for the people of the city to be more responsible with their firearms following the murder of their son.

Reading a statement outside the Davidson County Juvenile Detention Center, Kyle's father, Larry Yorlets, read a statement about the five teens linked to the murder of his son. In it, he called for two of the teens, Deccorius Wright and Diamond Lewis to be sent over to the adult court system. He also called for the city of Nashville to lock up their guns, especially when kept in cars.

"This plague that has infested the Nashville area needs to be brought under control," said Yorlets surrounded by Kyle's other family members who all traveled to Nashville from Pennsylvania. "It has to start somewhere and it might as well start here. Tennessee and Davidson County have a obligation to my son and the people of Nashville to transfer these young adults to adult court and hold them accountable to the full extent of the law. Bottom line this is not shop lifting or graffiti. This is cold blooded murder."

Kyle was shot and killed in the alleyway behind his home on February 7, 2019. The five people who were arrested ranged in age from 12 to 16. Lewis is accused of robbing Kyle and Wright is accused of pulling the trigger of the gun that killed him.

"When these young adults made a decision to senselessly murder my son. They also made the decision that they no longer wanted to be a part of a civil society. It's our obligation and prerogative as a society through the judicial system to honor that request permanently whatever that may entail," said Yorlets.

The family sat in the courtroom Monday morning as defense attorneys for the two suspects tried to convince judge Sheila Calloway that their clients could only be rehabilitated in juvenile court. That sentiment did not appease the Yorlets family.

"Rehabilitation should never be an option for a cold blooded murder case. That basically is a slap on the wrist and sends the message to innocent victims that the innocent victim's life meant nothing," said Yorlets.

Finally, the family looked to the issue of gun and car thefts in the city of Nashville, putting this call out to its citizens:

"I challenge the people of Nashville to look at my son's murder and other recent murders and serious crimes in Nashville as a wake up call. Take a personal initiative with gun storage, especially in your vehicle. Second, demand that your councilmen, council women and legislators make the necessary changes to make Nashville, your home, safe again."