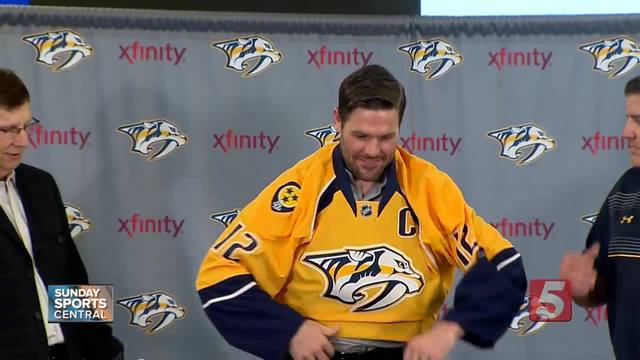 For nearly all of his 37 years, Mike Fisher has lived at a hockey rink. He scored 276 goals over his 17 seasons playing for the Senators and Predators.

For nearly all of his 37 years, Mike Fisher has lived at a hockey rink. He scored 276 goals over his 17 seasons playing for the Senators and Predators.

But Tuesday night he was a man out of place, wearing a suit onto the Bridgestone Arena ice. Fisher returned to Smashville to help the Predators raise the Western Conference Champions banner he helped them capture one season ago.

"I was looking forward to it, but I wasn't at the same time because I understand the emotions of it and missing it," Fisher said after the banner ceremony. "But the banner kind of brought back some special memories of (the) year, and seeing the guys was great, so it was fun."

It was a year unlike any other for Fisher, who was named the captain of the team in the summer of 2016 after the blockbuster trade that sent Shea Weber to Montreal in exchange for P.K. Subban.

Fisher accepted the captain's "C" and had one of his best seasons, scoring 18 goals and dishing out 24 assists in the regular season. Then in the playoffs, an ailing Fisher gutted his way onto the ice time and time again, leading the Preds on their deepest playoff run ever, reaching the Stanley Cup Final while igniting a fanbase and a city along the way.

"So many moments in that playoff run where it just kept getting crazier and crazier," Fisher said. "And seeing pictures of the whole city and everything was gold, and what we were able to accomplish. You know, I'll never forget it, that was the best year I've ever had."

But a couple of months removed from a six game defeat to the Penguins in the Stanley Cup Final, a weary Fisher decided to call it a career and hang up his skates after 1,088 games in the NHL.

It was a decision that Fisher, a man of great faith and deeply devoted to his family, had contemplated for quite some time.

"The summer before I thought it could've been my last year," Fisher said. "It was very tough because I actually didn't see my family that whole year two years ago. But I knew I was supposed to come back through some certain circumstances, but in my head I knew it was probably a pretty good chance it was my last year the whole time."

A grateful Fisher penned a letter of thanks to Smashville fans, but stepped into life after hockey with no regrets.

For the first time since he was just out of diapers, Fisher didn't have a hockey camp to get ready for this fall. Instead, he's spent his time involved at church and running Catching Deers, the hunting apparel company he co-founded.

He's also happy to support his wife, country superstar Carrie Underwood, and focus on his new job of being a full-time dad to young Isaiah.

"Sometimes I think about missing the game and then I look at him and think, 'well, that's really a big part of the reason' is being around and being in his life all the time," Fisher said. "I've enjoyed it and hopefully he has, too."

It's an unknown world for Fisher, but it's one he's very much ready to enjoy.