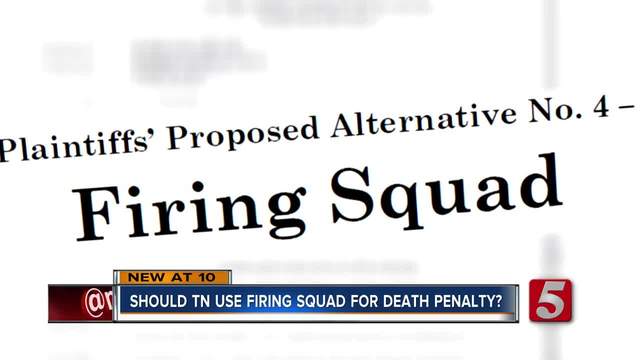 A lawsuit filed by an attorney representing four Tennessee death row inmates suggests that death by firing squad is a better option to minimize harm to prisoners scheduled to die.

A lawsuit filed by an attorney representing four Tennessee death row inmates suggests that death by firing squad is a better option to minimize harm to prisoners scheduled to die.

The federal lawsuit, filed by death row inmates David Earl Miller, Nicholas Todd Sutton, Stephen Michael West, and Larry McKay, is the latest attempt to stop the state from using its three-drug lethal injection protocol to kill death row inmates.  They argue the drugs used make it possible for inmates to feel intense pain while being put to death, while that pain is masked by a paralytic in one of the drugs.

Among four alternatives proposed by the inmates' attorney, the lawsuit says the firing squad is an option that could potentially be available to carry out death sentences, even though it is currently banned in Tennessee and nearly every other state.

The lawsuit says the U.S. Supreme Court has upheld death by firing squad as constitutional.

In making the case for a firing squad alternative, the lawsuit cites a nearly-60-year-old document: a 1959 Department of the Army manual detailing the procedure for military executions, specifically the provisions for a firing squad in a section entitled "Executions By Musketry."

The 1959 military protocol called for eight rifles -- with as many as three loaded with blanks -- to be shot at the condemned prisoner's heart.

According to the protocol, following the rifle shots, "if necessary," the head of the execution team would administer a "coup de grace" -- a pistol shot "holding the muzzle just above the ear and one foot from the head."

Nashville attorney David Raybin, who helped craft Tennessee's death penalty law, says the lawsuit is an attempt to convince a federal judge to halt lethal injections in Tennessee, while the inmates also await rulings from state appellate courts -- an effort Raybin calls "a stretch," but one that the inmates may have to make to avoid death by lethal injection.

"These defendants are running out of legal options here, and this is an interesting way of presenting these issues," Raybin said.

While the state legislature would have to approve the firing squad method in Tennessee for it to be used, it would not necessarily have to follow the protocol the military used in the 1950s.