The community is also mourning the loss of the metro police officer who lost his life this morning. This is how one man is trying offer some comfort to everyone who is hurting.

An 18-year veteran of the Metro Nashville Police Department passed away in the line of duty.

Through social media, officials with the MNPD said they spoke with "heavy hearts" after the discovery of Officer Mumaw's body. They also detailed an award he received in 2011, the MNPD's Lifesaving Award, showcasing his past heroic actions.

Mayor Megan Barry ordered all flags at Metro buildings to fly at half-staff in honor of the "life and service" of Officer Mumaw. The mayor released the following statement on his passing:

“Our worst fears were realized today when Officer Mumaw was recovered deceased from the Cumberland River after having given his life to save a woman in distress. Officer Mumaw dedicated his life to the safety and protection of us all, and today he gave his life to that calling. My thoughts and prayers are with Officer Mumaw’s family and friends and all of our Metro Nashville Police Officers today.

“I want to thank the men and women of our Metro Nashville Police Department and Nashville Fire Department, as well as the city of Hendersonville, Tennessee Highway Patrol, Tennessee Wildlife Resources Agency, and Army Corps of Engineers who all came together this morning to assist in the search for Officer Mumaw.”

Mayor Barry ordered all flags at Metro buildings to fly at half-staff in Officer Mumaw's honor.

Those in the community also showed their sorrow over the officer's death, thanking him for his years of service.

Robert Brown lives nearby and is making 44 crosses to line this street in honor of 44-year-old Officer Eric Mumaw @NC5 pic.twitter.com/Vpsp8dkEhS

In honor of Officer Mumaw, who was only 44 years old at his passing, one man, Robert Brown, has said he's making 44 crosses to line the street. He also placed a sign in remembrance of Officer Mumaw. Brown lives near the scene.

“Officer Mumaw loved this city and very much enjoyed working the overnight shift at the Madison Precinct,” Chief Steve Anderson said.  “Our department and Nashville have suffered the great loss of a true public servant.”

"We need the thoughts and prayers of the city for this police officer," Don Aaron, Public Affairs Manager for the MNPD, said.

I had the opportunity to meet Officer Mumaw during Christmastime & was touched by his warmth and sense of humor.https://t.co/nvpeZQhtr9 pic.twitter.com/mhbMucAsuJ

Reports stated a 40-year-old woman, later identified as Juli Glisson, was contemplating suicide at the end of a boat ramp at Peeler Park.

Three officers, one of whom was Mumaw, made contact with her and tried to talk her out of the car.

At some point, the car was put in gear and rolled backwards down the ramp. In an effort to save her, they tried to get her out of the car, but slipped as the car became submerged.

Mumaw's fellow officer, identified as Officer Nick Diamond, tried to save him but was unsuccessful.

The third officer, identified as Officer Trent Craig, ran down the riverbank and saw Officer Mumaw's head sticking out of the water.

Officer Craig jumped in the water up to his neck, but authorities said the extremely cold temperatures and water conditions forced him to get out.

The water was said to be about 15-feet deep in that area and about 49 degrees. His body was later recovered by a diver.

Glisson was detained and was allegedly impaired.

Officer Diamond was injured in the incident. He also went into the water, and authorities said he was in stable condition at Vanderbilt University Medical Center. 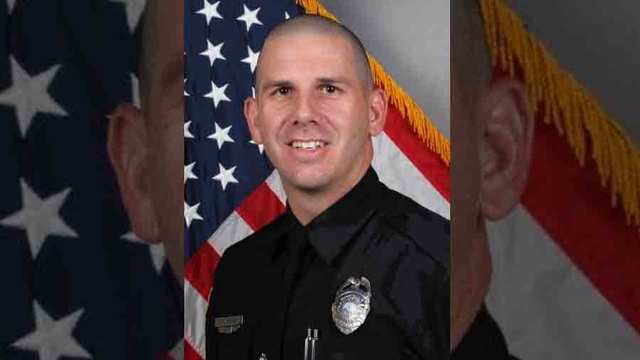 Officer Craig was treated at the scene.

Mumaw was the first officer to die in the line of duty since Officer Michael Petrina was hit and killed on Interstate 65 in May 2014.

Community members stated on social media a vigil had been planned in honor of Officer Mumaw at Peeler Park at 7 p.m. on Friday.

A memorial service has been planned for Officer Mumaw at noon on Monday at Cornerstone Church in the 700 block of West Old Hickory Boulevard in Madison. Before the service, officials said visitation would take place at the church from 9 a.m. to noon.

For those wishing to send their condolences to Officer Mumaw's family and colleagues, you can send those to the following email: OfficerMumaw@nashville.gov.